SLT Research@slt_researchAugust 24
$18.9m follower assets
SLT Core Portfolio: $GOOGL
Alphabet ranked first following our quantitative screener, so it seemed obvious to us to analyze it first. Below is a high-level write up on the company outlining the characteristics of the company that fit our investment philosophy. We hope you will enjoy the analysis and please do not hesitate to give us your feedback!
Company Description
The company needs no introduction. Alphabet is the parent company of Google, the firm
behind the world's largest search engine (Google), the world's most used smartphone operating system (Android), and a multitude of other internet-based services, including the world's largest video-sharing site (YouTube).
From an operation point of view, the company reports as two segments: Google Services and Google Cloud. The company reports all non-Google businesses collectively as “Other Bets”
Thesis

Competitive Moat
Strong Network Effect: It is strongly present in GOOGL search service, and the company's advantage here is significant and sustainable. The quality of Google’s search engine service increases when the number of search increases, which is at its core the definition of a network effect. This is powered by the company’s constant machine learning (ML) developments. As search results are more relevant, the user experience is improved and utilization of Google search naturally increases. To give a little bit of context, Google handles 3.8 million searches per minute on average across the globe. That comes out to 228 million searches per hour, 5.6 billion searches per day, or 2 trillion searches per year.
Translated in GOOGL ads core business, the more GOOGL learns about its users through their
searches, the better its targeting ability becomes. With improving targeting ability, the service becomes more valuable to advertisers. The flywheel is complete as more advertisers use the service, the more relevant the ads are to users... 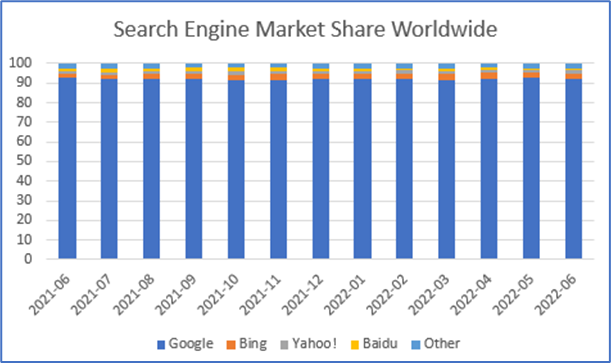 This competitive advantage appear difficult for any competitor to overcome. As of June 2022,
GOOGL search engine market share worldwide stands at 91.86%. The above chart shows the consistency in GOOGL control (and even ownership) of the search market. GOOGL moat is deep and wide.
Valuable Brand:

As soon as the name of the service became a verb recognized in the dictionary meaning
searching information on the internet, we are not sure a few more lines are necessary to debate on how valuable the Google brand is.
Sustainable Growth
Secular Trend: e-commerce and digital advertising.
Over the long term and according to Morgan Stanley, the e-commerce market has plenty of room to grow and could increase from $3.3 trillion today to $5.4 trillion in 2026.
The growth of digital commerce represents a permanent change in how people shop. In fact,
Morgan Stanley’s industry model, along with other data, suggests that e-commerce will continue to gain traction, even in countries where online shopping is already popular. In the US, e-commerce could reach 31% of sales by 2026, up from 23% now, as brick-and-mortar stores close and consumers prioritize convenience. 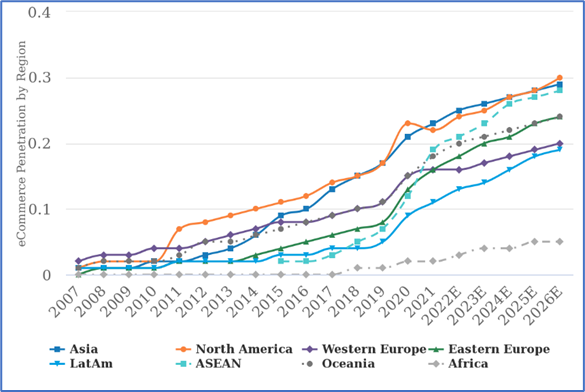 E-commerce as a percentage of retail sales continues to grow across regions. Source: Morgan Stanley.
GOOGL is the structural winner from the secular trend of commerce and services shifting from
offline, physical venues to digital store fronts. In this era, Google Services, and Google Search in particular, represent the modern day equivalent of the old high-street i.e. the place where you would find consumers with high purchase intent. Sitting at the intersection of merchants and consumers, GOOGL clearly stands to benefit from e-commerce becoming an ever-increasing channel within global retail.
The growing importance of e-commerce to clients' marketing strategies could be a key source
of sales growth and share gains for GOOGL. Brands are expanding beyond the development of direct-to-consumer sales channels, weighing a bigger share of ad budgets for e-commerce benefiting companies like GOOGL.
WARC is forecasting GOOGL to attract $203 billion of digital advertising through both
Google and YouTube. According to Statista, digital advertising spending worldwide is expected to grow from $521.02 billion in 2021 to $876.1 billion in 2026, representing a steady 10.95% CAGR. 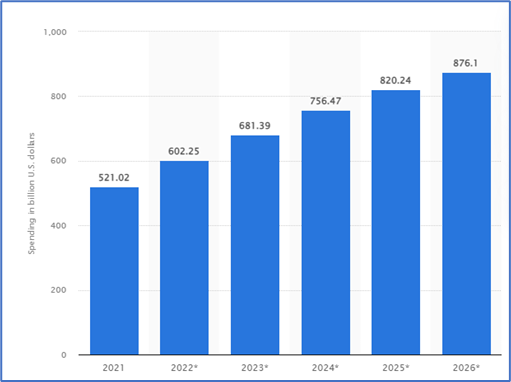 Digital advertising spending worldwide from 2021 to 2026. Source: Statista.
Secular Trend: public cloud.
According to the findings of IoT Analytics cloud research, practitioners estimate the current adoption of public cloud workloads to be between 15% and 25%. When asked what percentage of workloads they imagine seeing in the public cloud in a future end state, answers ranged from 50% to 75%. GOOGL is expected to retain its third place in the massive TAM for public cloud, but we would like to point out that being third in a $597 billion market by 2027 (and potentially $2 trillion in the very long run) with steady state operating margins in the 30% range (competitors current margins) is still very attractive. 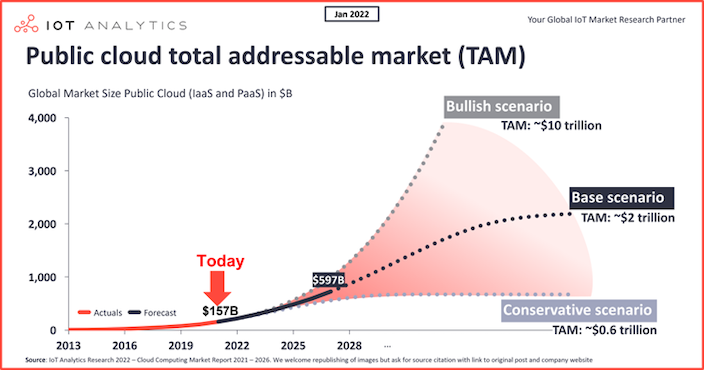 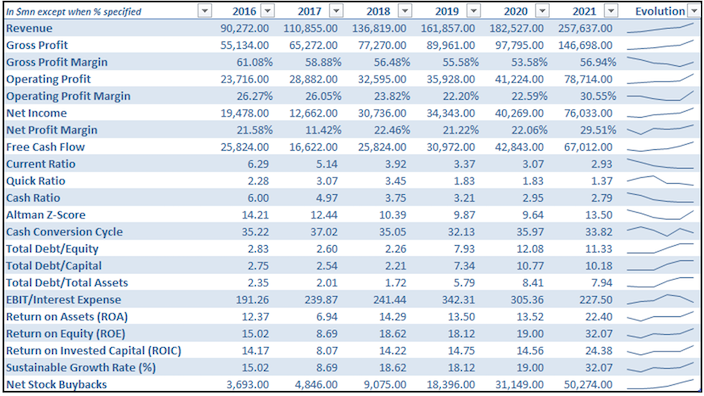 Revenue reached c.$257B in 2021, up more than 23% CAGR since 2016. Revenue is expected to remain stable in 2022. However we need to account for GOOGL services suspension in Russia and also recession fears. For scale purposes, GOOGL generated a revenue higher than Portugal’s GDP in 2021.
Gross margin remained high around 60% (±5%) and is expected to be, in 2022, the highest we have observed over the last 5/6 years around 65%. Operating profit and margin grew and fluctuated in line with Gross Profit but we can observe a net improvement in 2021 and 2022E. It is explained by the decline in operating expenses (as a % of revenue) from 34.8% in 2016 to 26.4% in 2022E.
Net Profit margin drastically improved in the recent years to the high 20s. In 2021, the company returned a ROA of 22.4%, significantly higher than historical constant ROA in the low 10s. ROE also improved significantly reaching 32.07%. It is worth mentioning that given the low gearing of company, the ROE is mainly driven by a combination of higher profits and shares count reduction.
GOOGL balance sheet is very strong. From a liquidity point of view, current assets almost
represent 3x current liabilities. As of the 30th of June 2022, the company was sitting on $125 billion of cash, cash equivalents and short-term investments (STI).
From a solvability perspective, GOOGL level of debt is low. Total debt does not represent more than 8% of total assets and slightly more than 11% of total equity. 2021 EBIT was at a level enough to cover more than 227x the company’s interest expense! Altman’s Z-Score, constant around and above 10, shows GOOGL’s more than solid financial position.
The company generated a free cash flow (FCF) of $67B in 2021. The latter grew 21% CAGR over the period and in line with Net Income. Main use of cash was the acquisition of
fixed prod assets and shares repurchase.
Looking forward (consensus estimates median), GOOGL revenue is expected to grow at a steady 12% CAGR by 2025. Gross profit margin is set to increase, but we don't think it will reach consensus ambitious estimates, which imply a 10% increase from 2021 to 2022E. Continued improvement of Operating Profit margin is likely to enhance GOOGL bottom line’s profitability.

The above table shows the unique profitability of the GOOGL compared to its competitors. The only ratios where GOOGL is close to the median is Revenue Growth. Capex as a
percentage of Revenue is higher than median. However, it is significantly lower than closest competitors Meta and Amazon.
Management Checklist and ESG considerations 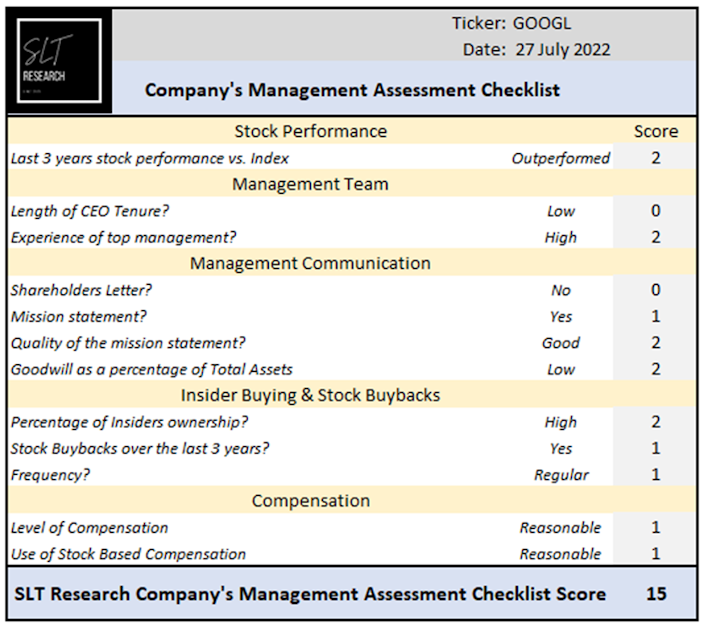 GOOGL has a high score using our Management Assessment Checklist, we particularly like management’s capital allocation skills following the company’s mission (“Our mission is to organize the world’s information and make it universally accessible and useful.”) but also the fact that co-founders Larry Page and Sergey Bin retained majority control of the company.
Indeed, GOOGL founders are determined to remain in control of the company. Markets and investors can be short-sighted in their insistence on immediate results, even at the expense of
long-term strategy. The introduction of a new class of non-voting shares (GOOG) in 2014 enabled Brin and Page to take advantage of public-market liquidity while retaining majority control of the company, and adopting a long-term view, usually creating more value to shareholders
GOOGL has been constantly repurchasing shares over the last five years and does not pay dividends. Given ROIC significantly higher than WACC, we believe it is a smart use of its cash.
The below graph shows that even though buybacks were constant, the management opportunistically increased the amount of shares repurchased when stock price appeared cheap in 2020 (Covid-19) and in the current bear market. 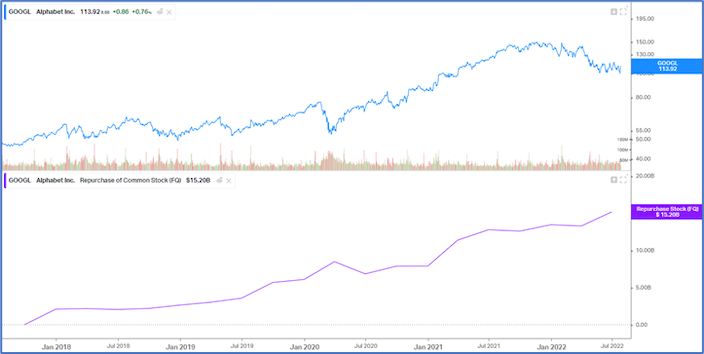 Source: Koyfin
The company is very active for a few years already from an ESG perspective. GOOGL scores above peers median regarding its Governance policy. The company is the peer group leader regarding Environmental and Social matters (Bloomberg ESG Scores). GOOGL is carbon neutral since 2007 and committed to be carbon free by 2030.
Valuation

As of 22nd of August 2022.
The company is currently trading at around -1 standard deviation from all historical multiple average presented above. The stock has never been traded at a P/E ratio lower the one recently experienced (bear market 2022) during the last five years. We believe GOOGL recent market capitalization decline is caused by global technology stocks sell off due to higher interest rates and recession fears.
However, we believe GOOGL showed itself as a resilient business through macro uncertainty and despite short-term digital-advertisement market clouded environment, the current price is attractive given ever-expanding advertising revenue opportunity.
Beyond its more durable advertising revenue growth, we believe there is more upside than target price using historical multiple average for the following reasons: 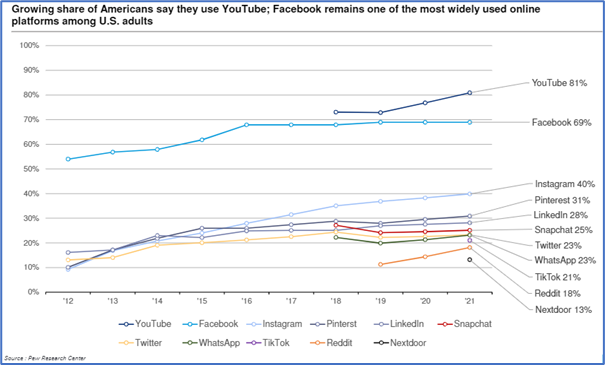 Risks
Disclaimer: The information provided in this post is for information only and solely on the basis that you will make your own investment decisions after having performed appropriate due diligence.

Ian MacLean@madbadetcAugust 24
It used to improve with every search. Now the results are so manipulated, people are aggressively seeking alternatives. I deeply hope that trend persists. 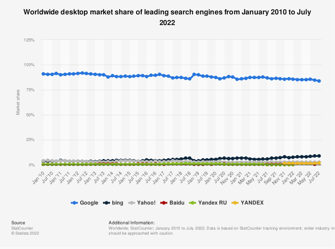 Who are these “people”

SLT Research@slt_researchAugust 24
Author
@rpinvestments thanks Ben. This is the graph I was looking for.

Ben@rpinvestmentsAugust 24
@slt_research thanks. Great write up. I agree. And $GOOGL my largest holding.

Rihard Jarc@rihardjarcAugust 25
The charts about the future growth of the e-commerce industry as well as public cloud are staggering. Two already huge industries poised to continue getting even bigger and bigger.

StockOpine@stockopineAugust 26
Great write up @slt_research ! Always happy to read about $GOOGL. Thanks for sharing!