Source: Google 10K reports, StockOpine analysis
Alphabet’s Gross Profit Margin (GPM) gradually declined from 62.4% in 2015 to 53.6% in 2020, although, the declining trend reversed in 2021 with the GPM rising to 56.9%.
Cost of revenue
Alphabet’s GPM deteriorated in the period under review as cost of revenues which consist of traffic acquisition cost (TAC) and other cost of revenue accelerated at a faster pace than revenues.

Source: Google 10K reports, StockOpine analysis
While one would expect the TAC rates to increase from the ongoing shift from desktop to mobile, as mobile carries higher TAC rate, its adverse impact was offset by the revenue mix change from ads on Google Network properties to ads on Google Search & other properties. For example, revenue from Google Network Members properties declined from 18.4% in 2017 as a % of advertising revenues to 15.1% in 2021. It should be noted that Google Network properties TAC rate is in the range of 70% while TAC rate for Google Search & other properties is in the mid-teens range.
Other cost of revenues
Other cost of revenues over the same period increased at an even faster rate compared to TAC, pushing the GPM lower. The main reason for this, was the change in revenue mix with non-advertising revenues (Cloud and Other) and YouTube gaining revenue weight and reaching (combined) 30% of total revenue in 2021 Vs 21% back in 2017. Since other cost of revenues include data center expenses, content acquisition costs and hardware costs etc., the investments in those segments drove expenses higher. 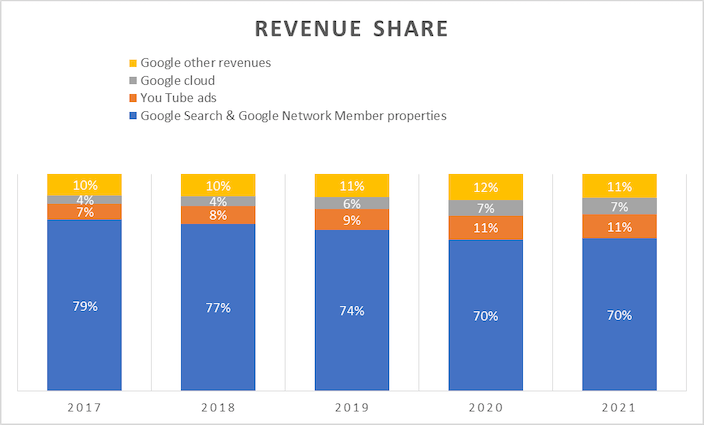 Source: Google 10K reports, StockOpine analysis
2021 improvement in GPM
Despite the gradual decline in gross profit margin since 2015, Alphabet improved its GPM from 53.6% in 2020 to 56.9% in 2021 benefiting from higher revenue growth (41%) compared to the cost of revenue growth of 31%.
One of the main drivers of the margin improvement was mix driven with Google Search revenue growing faster than Google Network Properties and Google other revenues, thus accounting for a higher % of revenue (58% in 2021 Vs 57.3% in 2020). Additionally, a reduction in depreciation expense in 2021 due to a change in the estimated useful life of servers and certain network equipment had a positive impact on GPM of approximately 0.8%. Even if we exclude this non-recurring / accounting impact there was still an improvement of c. 2.5% in GPM.
To conclude, GPM could be adversely affected as revenue mix shifts from Google Search towards other segments such as Google Cloud, Google Play, hardware products, and YouTube however, segments such us Google Cloud are at early stages of their lifecycle, therefore they are not yet optimized for profitability given the ongoing investments. Such investments allow the company to further grow and widen its moat.
Disclaimer: Not a financial advice.

Uday@upluskJuly 27
Thanks for the detailed analysis. Was trying to sift through margin data myself this morning. Search and services is a huge cash machine that just keeps on giving. I would'nt be too worried about the changing revenue mix driving margin down atm. Cloud is a strategic bet on the enterprise segment that gives them a presence in a fast growing segment I believe.
Capital allocation has been solid, FCF is growing and the company keeps innovating. I'm positive

StockOpine@stockopineJuly 27
Author
You are welcome @uplusk . We tend to agree with your view and we are positive on $GOOGL as well as it is our largest holding. In our opinion, the revenue mix change observed also widens Google's moat.

Joshua Simka@tomatoJuly 28
@stockopine Can you share your cost basis on $GOOG? Did you recently build up the position?

StockOpine@stockopineJuly 29
Author
Sure @tomato . Our weighted cost basis is c.$128.

SLT Research@slt_researchJuly 27
Thanks for the analysis. We are currently working on $GOOGL as part of our Core portfolio. Consensus estimates predict strong gross margin improvement, with the latter above 2015 levels over the next three years.
Just sharing consensus estimates below.

StockOpine@stockopineJuly 27
Author
You are welcome @slt_research . Where did you obtain those high margins? They seem a bit on the higher side (at least in the short term) given that revenue mix is changing (search accounts for a lower % of revenue compared to 2015) and Cloud is still loss making.

SLT Research@slt_researchJuly 27
@stockopine consensus estimates overview on Bloomberg. Was surprised too. Estimates range between 56% and 74.5%. I have used median estimated margins.

StockOpine@stockopineJuly 27
Author
@slt_research makes sense. but a scenario with lower margins could add value to this analysis.

Conor Mac@investmenttalkJuly 27
Going to be flicking through Goog earnings this morning, any major takeways from yourself?

Uday@upluskJuly 27
@investmenttalk they didn't comment on anything substantial. My biggest takeaway would be them still growing over mammoth comps from last year in services. Growth definitely softened in all regions, but I'll happily take this over meaningful declines any day, given the tough environment.

StockOpine@stockopineJuly 27
Author
@investmenttalk the main takeaways we noted are the following:
1) Revenue from search remained strong growing by 13.5%. Despite this, the current environment is tough, and it is possible that a reduced ad spending will appear in Q3 given that Q2 was driven by travel ads.
2) YouTube growth was minimal (5%) and the management explanations about prior year comparisons appear reasonable, as travel restrictions eased and less time is spent on streaming. We are cautious on this given the competitive environment (Reels, TikTok, $NFLX etc.).
3) Hyper growth for Google Cloud stays on track (but lower compared to Q1'22 and Q4'21 y-o-y growth rates) as it increased by 36% whereas operating loss widened. Not enough light on this by management but what we picked is that long term growth matters more than profitability at this stage.
Would be interested to hear your thoughts after you read Google earnings.

Rihard Jarc@rihardjarcJuly 28
$GOOGL's margin would be even more crazyer if they didn't have to pay $AAPL to be the default search engine on Safari. That deal must be one of the biggest deals ever.