Rich Excell@stayvigilantJanuary 17
$16.6m follower assets
Chart of the Day - Ohayou Gozaimasu!
Or said another way, good morning! All eyes for the next 24-48 hours will be on Japan as the biggest news of the week may come from the Land of the Rising Sun.
The BOJ meets on Wednesday and there is growing speculation it will further ease its yield curve control (YCC) policy. It had limited the 10yr JGB (Japanese Govt Bond) to yield 25 bps. It then widened to 50 bps last fall.
The speculation (still not consensus) is that the BOJ could widen to 1%. In fact, the JGB has traded above the 0.5% band and sits right at the band now into the meeting. We can see from the price action in the Yen the mkt is starting to expect a move.
BOJ Governor Kuroda is stepping down in April 2023. The speculation is the policy changes when he does. The recent sentiment is that something will be announced before that happens, as soon as tomorrow.
If the band widens, the expectation is the Yen will continue to strengthen. Short term traders see little risk in betting on this because the trend is lower in USDJPY. After all, the BOJ has intervened trying to strengthen so it won't go above that level, right?
This will have an impact on all asset classes. Given the large capital surplus in Japan, institutional and retail investors send their money abroad, in stocks, bonds & FX, seeking higher yields than at home.
We can see in the top chart the relationship of USD/JPY in white, the Treasury/JGB spread in blue and the Nikkei vs. MSCI World in orange. AS the Yen weakens, the Nikkei has outperformed & vice versa. The bond spread relationship is more direct.
Even bigger is the bottom chart. It is the performance of the HFRI Macro Fund Index vs. USDJPY. Since the crisis, given the lowest yields on the planet, HF have borrowed in Yen & invested abroad. Their cost of funds is fixed & the currency weakens. All good right?
Until that changes. If the band widens & the Yen strengthens, this negatively impacts Macro HF profits. Does this lead them, in the near term, to rush to close out trades as they may look to reduce their leverage as the cost of capital changes?
Levered accounts (HF) are short equity futures & short 10 year futures right now. The oil long have come down a lot. Nat gas shorts still exist. What does a move in the Yen do to these positions?
Changes in the cost of capital in Japan will have ripple effects across all assets. Whether it happens tomorrow or by April, this is a risk that investors need to be aware of.
It is a risk that causes us to ... Stay Vigilant
#markets #investing #FX #Yen #assetallocation 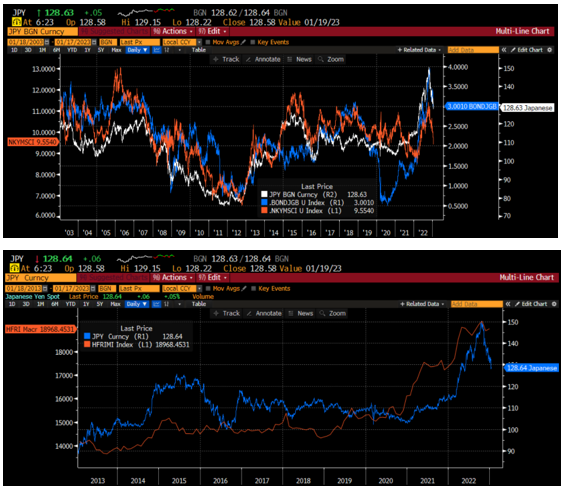