Nathan Worden@nathanworden08/26/2020
$333m follower assets
Variance as a measure of Risk
When you hear financial advisors say “risk,” a lot of the time what they really mean is “variance.”
What is variance? It’s the volatility of returns.
Example:
If you have three stocks and the first one returns -2%, the second returns 0%, and the third returns +2%, then the average of the three is 0%. Lets say my brother has three different stocks and his returns are -40%, 0%, and +40% respectively. He achieved the same return as you but did so with more volatility around the average.
All else being equal, most people would choose to go with the first set, because it is a less scary ride.
While most people prefer having lower variance, I argue that low variance is not something you should optimize for unless you are close to needing to pull out your money.
If I don’t need to pull out money right this moment, then why would I care that some short term news event caused my investments to go down? If the long term reason my investments should go up is still intact, then variance really isn't a good way to describe risk for me.
It’s actually kind of misleading to say we are “reducing risk” when the only real risk I care about is the permanent loss of capital.
The perniciousness of equating variance to risk goes deeper though- because often innovative companies have higher volatility. If you’re out there trying to change the world with a new technology, service, or business model, the chances of you failing are higher. That means when something bad happens, your share price is going to drop more than normal, because the chance of you failing seems more likely. 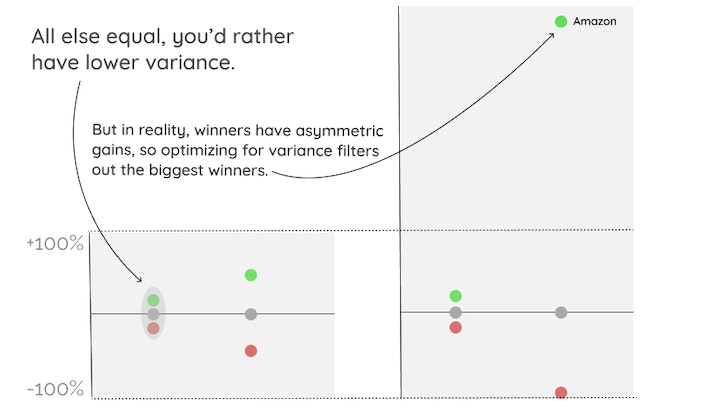 I invested in Amazon in 2013 when share were at $299. If Amazon failed like all my business professors said it would, I would have lost 100% of my investment. But Amazon succeed and shares are now up over 1,000% from when I bought them.
If I was trying to decrease my variance, then I would never invest in companies like Amazon, because it has high volatility. Yes, companies like Amazon in their early days pose a higher likelihood of permanent loss, but if you invest in a basket of 10 of them, all you need is one of them to do really well. Even if most of the rest go to zero, you will still end up with better returns than a portfolio of companies that were trying to keep the ride steady.
My advice: optimize for final returns, and accept the variance that comes with that strategy. And don’t conflate variance with risk, because they are different things.
John@bdakter08/30/2020
Nice read! Perhaps I missed it, but where do you define what "risk" is?