Edmund Simms@valuablMay 5
$8.2m follower assets
No, stocks are still not cheap
Stock prices haven't come down; instead, the cost of money has gone up. The equity investor deciding where to put their money will need to do better than ogle recent highs.
•••
With the Nasdaq-100, a technology-focused index of U.S. companies, down by a fifth this year, the prospective value investor may reason that stocks are cheap. After all, prices are markedly below their 52-week highs, yet companies have expanded. As one Twitter user said, "Facebook is the same price as in 2017 when revenues and earnings were a quarter of the size they are today." Sounds compelling. Indeed, what goes down must come back up, right? While this reasoning is intuitive, it is also dangerous. To borrow a phrase, it’s like 'driving in the rearview mirror.'
Stocks are not cheap; they're just not as expensive as they have been for the last 24 months. To crystallise what this means, imagine a discount retailer marking down an artificially marked-up price: "was $99, now just $9," when the recommended retail price is $10.
For the 20 years that followed the new millennium, investors priced common stock in public U.S. companies to return 8.13% per year. However, when the pandemic struck and the world locked down, the availability of money exploded, and its price disintegrated. In 2018, stock investors demanded returns of 8.64% per year to part with their money. By the end of 2019, they required just 7.12%. And by the end of 2020, this number was down to 5.65%. The price of equity capital bottomed out at 5.51% in January 2021, at the same time as the earnings yield on the S&P500, an index of large U.S. companies, bottomed at 2.55%. "To the moon" was the rallying cry. However, since bottoming out at the start of last year, capital costs have started normalising. As of May 1, 2022, investors are pricing public equity to return 8.04%, roughly in line with past levels. 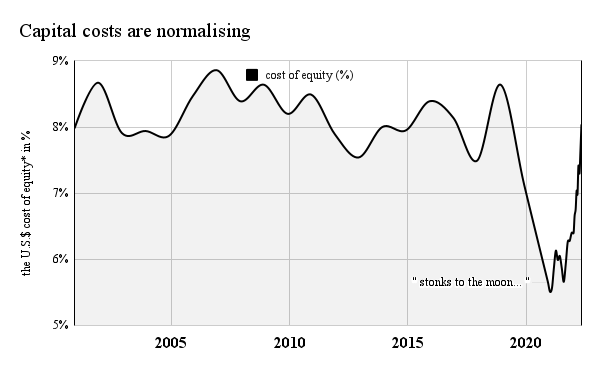 source: Valuabl
Cheapening money and rising asset prices are like 3am tequila shots in the club: they're fun until they aren't. As Jim Grant, the godfather of interest rate observation, said in a Morningstar interview with Christine Benz, "...muscle memory plays an important part in how we perceive things in finance, especially so on the rate of interest." The outcome of the monetary fire-sale was companies selling record levels of their equity to public markets. If money is cheap, get it. Last year, there were 1,035 public offerings of common stock in U.S. companies. That figure is a record and is more than double the 480 public offerings of stock in 2020, which was also a record.
Company executives, guided up the capital market mountain by their Wall Street sherpas, know that when money is cheap and equity overpriced, to sell shares and raise capital. Regrettably, equity investors forgot this creed and bought these new issuances hand over fist. They're now paying the price. My index of all last year’s U.S. IPOs has roughly halved since the start of this one. A picture tells a thousand four-letter words for the investors who swapped their money for freshly minted stock. 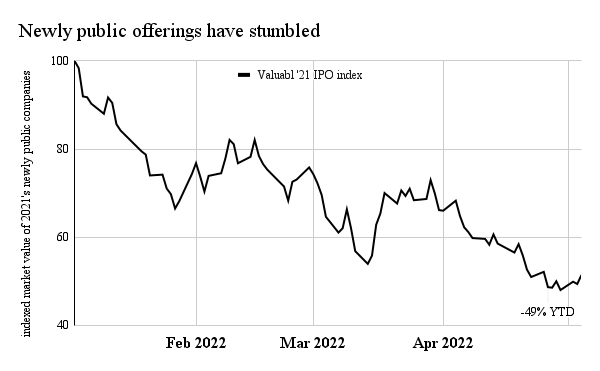 sources: S&P Capital IQ, Valuabl
The fear of missing out is a potent elixir when blended with the recency bias. With companies spinning nebulous yet gargantuan stories about their growth prospects, 'the Amazon of {insert $100trn market},' 'the Uber of {insert $500trn market},' and stock prices going parabolic, investor excitement was palpable, and their thirst unquenchable. But, as the cost of money began to normalise, greed turned to denial, denial turned to anger, and anger turned to depression, and we have rolled over into bargaining. Some investors yearn to believe that previous prices were justified and that current prices are ludicrously cheap. They might be right on some but are wrong in the aggregate. Don't fall into the trap of comparing current prices to former ones. Stocks are not cheap; instead, the cost of money has normalised somewhat, and there are still knives dangling precipitously over the counter's edge, ready to slice off overly eager fingers.

Joey Hirendernath@joeyhirendernathMay 5
Hi Edmund thanks for this clarification. I think the word cheap get's used a lot without really understanding what is actually taking place with the price of stocks. Your explanation adds the much-needed nuance and context :)