The Science of Hitting@tsoh_investingSeptember 19
$33.8m follower assets
Roku: "Focus First On Scale"
This is an extended preview of today's write-up, exclusively for Commonstock readers. To read the remainder of the post, please subscribe to the TSOH Investment Research service.
https://thescienceofhitting.com/p/roku-focus-first-on-scale
“There’s a huge amount of change and disruption happening in the TV industry. It’s going to create new winners and losers, and that’s hard.”
- Roku CEO Anthony Wood
The first Roku set-top box, which enabled people to stream content from the internet directly to their television sets, was launched in May 2008 (“Netflix accounted for 100% of our streaming hours”). A lot has happened over the ensuing 14 years, including a shift in form factors (from boxes / dongles to built-in smart TV operating systems / OS), widespread consumer adoption alongside many new use cases (from just Netflix to more than 10,000 “channels” / apps), and improved internet speeds. Those factors have culminated in huge growth for Roku’s platform: its annual engagement crossed 79 billion hours in Q2 FY22 (TTM), up >5x from five years ago. 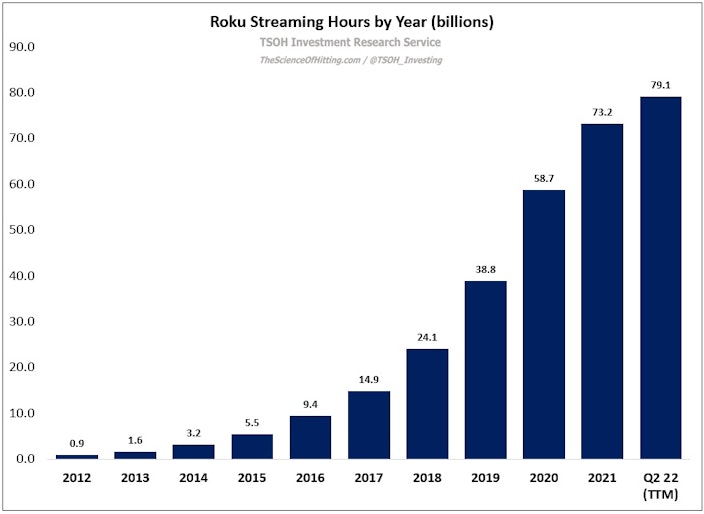 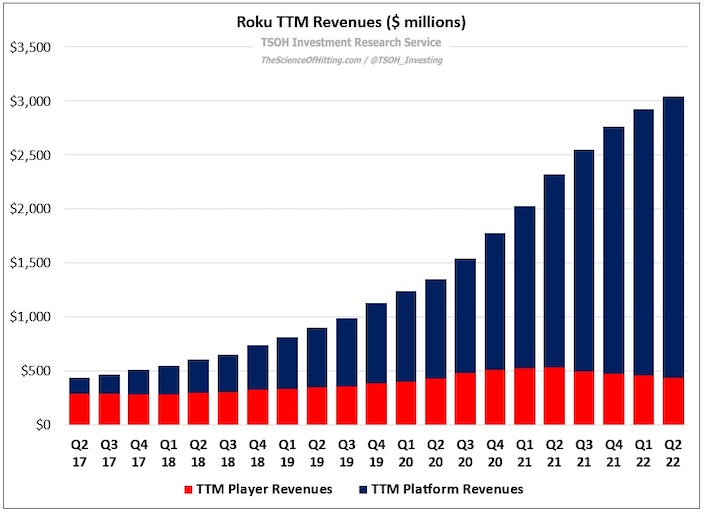 Player revenues are generated by selling Roku boxes and dongles / sticks that consumers plug into their TV. This segment, which generated $437 million in TTM revenues, is becoming less relevant over time as smart TV’s with a built-in OS take share from external devices (in Q2 FY22, Player unit volumes declined 16% YoY). Based on the language in the 10-K, it seems likely that the Player impact associated with the shift from hardware sales to OS licensing is a large revenue headwind. (“We do not typically receive, nor do we typically expect to receive, license revenue from [the Roku OS]”.) 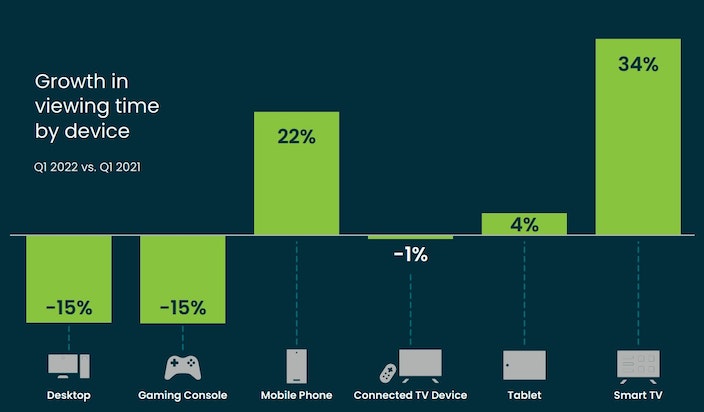 Notably, the Player segment has generated sizeable losses as of late (TTM gross profits of -$98 million and gross margins of -22%), which is reflective of an aggressive posture to support continued Roku hardware sales and overall active account growth (ASP’s for Roku’s streaming players declined by 7% in 2021). The business model assumes that upfront Player losses will be recouped over time through the Platform segment. (“We have continued to insulate consumers from our cost increases in our player business based on our growing ARPU, which enables us to prioritize account acquisition.”)
Platform revenues are generated in two main ways: (1) content distribution, i.e. revenue share agreements with apps offered through the platform; and (2) digital advertising on the Roku platform, along with other promotional activities such as branded takeovers of the Roku home screen and branded placements on the remote (the buttons). As shown above, TTM platform revenues increased nearly 5x over the past three years, to $2.6 billion in Q2 FY22. (In late 2018, management disclosed that roughly two-thirds of its Platform revenues was from advertising.) This growth reflects a >2x increase in active accounts (~31m to ~63m), as well as a >2x increase in average revenues per active account. (“We define active accounts as the number of distinct user accounts that streamed content on Roku in the last 30 days.”) 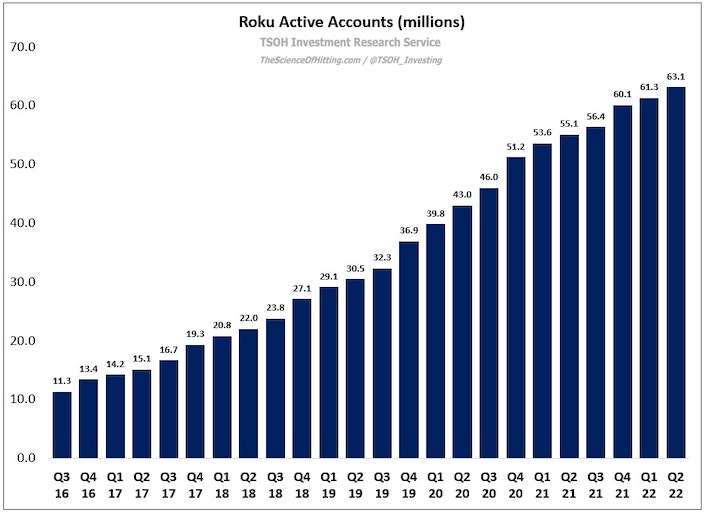 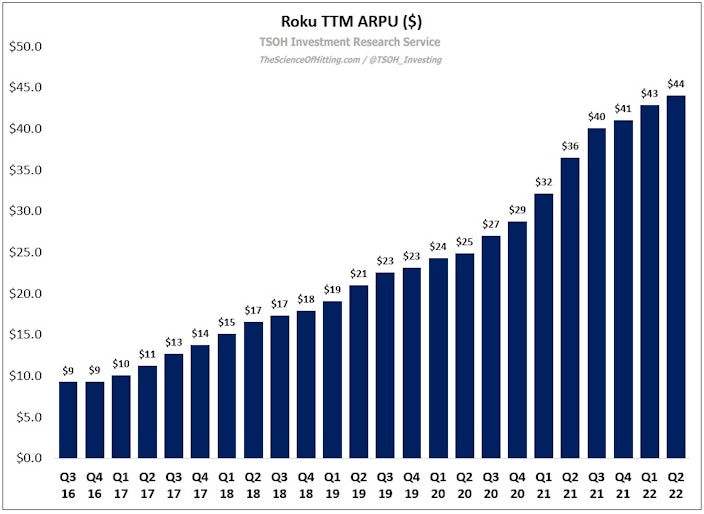 But as with many businesses, Roku experienced significant pandemic related tailwinds - and now investors have reason to worry about the hangover.
Over the past four quarters, YoY Platform segment revenue growth has decelerated from +117% (Q2 FY21) to +26% (Q2 FY22), with overall Roku revenue growth rates (shown below) decelerating from +81% to +18% over the same period. In addition, the business is now being negatively impacted by macro headwinds which are pressuring advertising budgets - driving further deceleration in Roku’s expected growth rates. For Q3 FY22, the guide calls for low-single digit revenue growth – a level that seemed unimaginable a few quarters ago. (“We expect these challenges to continue in the near term as economic concerns pressure markets worldwide.”) 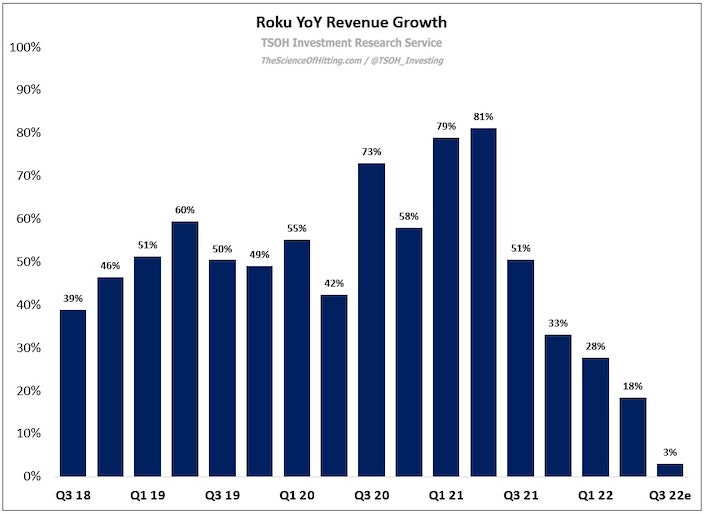 This significant deceleration has been met with a clear response from Mr. Market: on Friday, ROKU closed at $71 per share – down ~85% from the July 2021 highs. (On a side note, there was a June 2021 WSJ article that speculated about Comcast’s interest in buying Roku; since that article was published, Roku’s enterprise value has fallen from ~$53 billion to ~$8 billion.)
In the case of Roku, does the recent stock price pressure present an attractive opening for investors? Or, alternatively, does it point to reasonable questions / concerns about its long-term prospects and the economic attractiveness of its business model as we look 5-10 years down the road?
Financials
As noted earlier, Roku’s revenues increased significantly over the past few years. In addition, we’ve seen mix shift towards the Platform segment, which is accretive to consolidated gross margins (Platform accounted for ~86% of TTM revenues in Q2 FY22, up from <50% in early FY18). This has led to ~900 basis points of TTM gross margin expansion since the end of FY17; however, with recent pressure on both Player margins (as Roku eats COGS inflation in hopes of preserving active accounts growth) and Platform margins (with content amortization expense climbing to ~$100 million in 1H FY22, equal to ~7.5% of segment revenues in the period), consolidated TTM gross margins have retreated by ~400 basis points from the recent highs - with the Q3 guide suggesting that these pressures will continue. 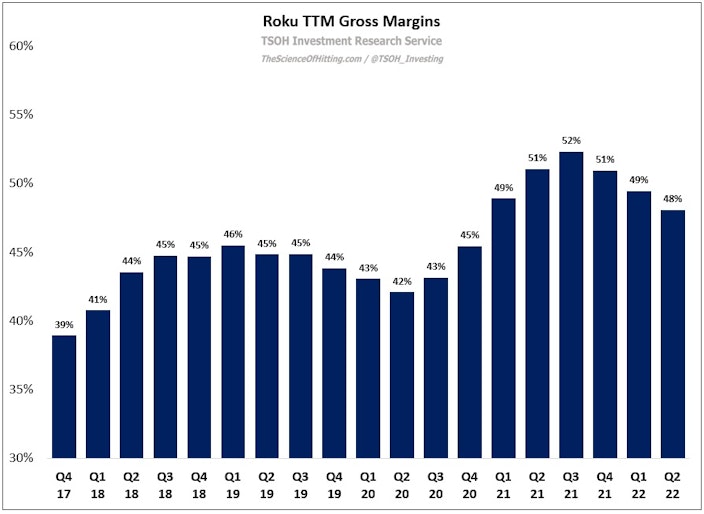 In addition to lower gross margins, operating expenses have outpaced revenue growth by a wide margin over the past 6-12 months (in 1H FY22, OpEx dollars increased 64% YoY – roughly 3x higher than the revenue growth rate in the same period). As a result, TTM operating income, which reached $279 million in Q3 FY21, fell into negative territory in Q2 FY22. 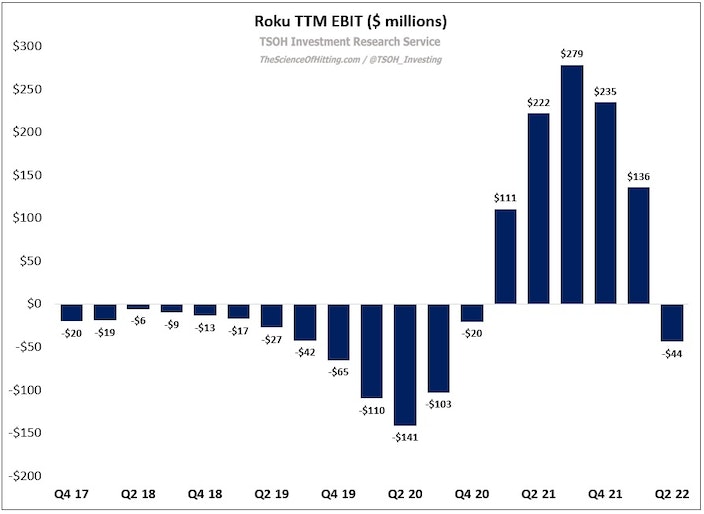 As these numbers clearly indicate, Roku has a problem on their hands; in the short-term, the significant deceleration in its revenue growth rates have not been met with a commensurate change in the rate of OpEx growth. As often happens in these difficult situations, my sense is that this is now leading to a renewed sense of focus from management on the core business model (“one of the lessons I learned was to focus and to have ruthless prioritization”).
(End Of Preview)
https://thescienceofhitting.com/p/roku-focus-first-on-scale
"Focus First On Scale"
Roku Deep Dive
thescienceofhitting.com

Brett Schafer@ccm_brettSeptember 19
Excited to give this a read!

The Science of Hitting@tsoh_investingSeptember 22
Author
@ccm_brett Excited to come on the pod! :)

Conor Mac@investmenttalkSeptember 20
Excellent Alex, you are building quite the library of followed companies.

The Science of Hitting@tsoh_investingSeptember 22
Author
@investmenttalk Thanks Conor! Only took me 10+ years, but slowly and surely expanding the universe, one company at a time.