Nathan Worden@nathanwordenApril 29
$332.5m follower assets
New position in TPL
Texas Pacific Land at $1,390.41
April 6
Compound Collaboration, Month #21 — Texas Pacific Land
Every month I put aside some money into a portfolio aimed at long-term bets over the next 20 years. I will be gifting this portfolio to my future kids someday. I hope to use these memos as an educational tool to teach them about the world. With any luck, managing the portfolio will become a shared activity to collaborate on as they grow up.
It is one of the main reasons why I invest. 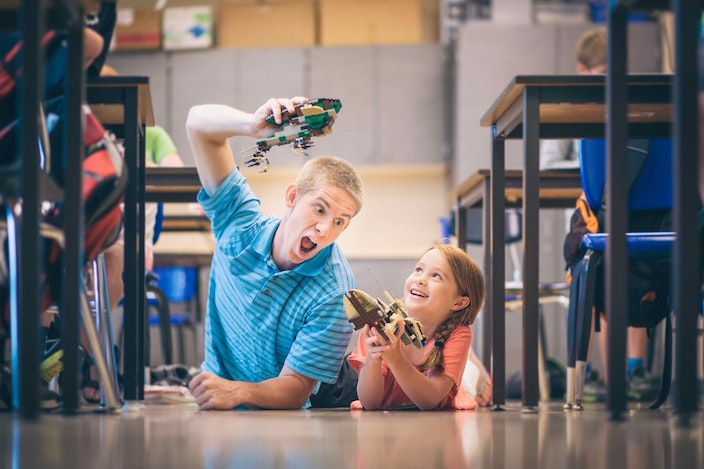 Things may keep getting worse before they get better. The extremely long time horizon intended for this portfolio allows me to sit tight. It's not fun to be down vs. the S&P 500 or in general, but for now, it's one stop along the way.
This month's addition:
Texas Pacific Land
Ticker: $TPL
Market Cap: 10.66B
Should tip the hat to Horizon Kinetics who have been big believers in $TPL for a long time (decades).
History
Texas Pacific land started out as a railroad 1871. The idea for the railroad was to connect West Texas with the coast of California. A federal charter granted land to the company for every mile of railroad it built. The company earned three and a half million acres of West Texas land from building the railroad. But guess how many people lived in West Texas in 1871? Pretty much no one! So the railroad went out of business— but the company still owned all that sweet land. So the Texas Pacific Land Trust was formed to manage the land, which it would sell and then return the money to owners of the trust certificates. In 1920, they stopped selling the land because, you guessed it: they discovered oil. Texas Pacific sold over 75% of its original landholdings. But even after all that, it is still the largest landowner in Texas. The remaining land is in the Permian basin of west Texas, the most productive oil field in the world right now. Texas Pacific now leases its land to oil companies and collects royalties from them.
Investable Attributes
Another part of the thesis is that in January 2021 Texas Pacific Land went from being a Trust to a Corporation. The reason this is important is that as a trust, $TPL was not part of the 'investable universe' for a lot of funds and ETFs. Now that it's a corporation, many more entities have access to invest in it.
The Main Thesis:
Texas Pacific Land is a way to get exposure to the price of oil without all the operational execution risk of an oil company. If the price of oil goes up, more oil companies will want to drill on $TPL's land, and the more royalties they will be able to collect.
I think oil demand will stay strong for years, and even in a world where we move primarily to renewables, there will still be a lot of uses for oil in the making of solar and renewable energy infrastructure. Even if oil prices stay where they are now, Texas Pacific is going to be highly profitable and flush with a ton of cash to return to shareholders.
Texas Pacific's estimates that the breakeven oil price for the bulk of their reserves is about $40 per barrel. If the price of oil stays above $40, Texas Pacific should see increased drilling activity on their land and increased revenue growth.
Now, oil reserves are a declining asset. One day Texas Pacific's oil reserves will be gone, or at least only economically viable with a really high price of oil. Right now, Texas Pacific projects that they have 19 years of reserves at a $40 per barrel breakeven price.
Risks
Things that aren't as big of a risk as people think
Here's my trade— bought at $1,390. Currently at $1,366. 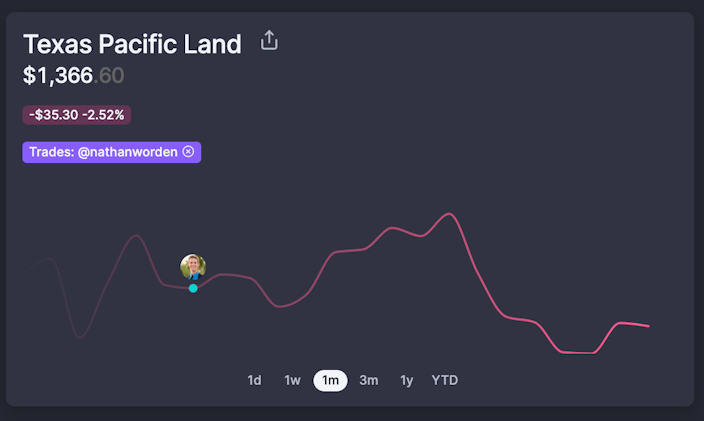 Nathan Worden@nathanwordenApril 29
Author
Noticing some other Commonstock users who hold Texas Pacific Land. Nick Rasmussen @nras00 has been holding for 564 days and Ram V @sirthroedness for 409 days, impressive! Would love to hear ya'lls thesis as well.
Same with @joryko — how long have you been holding $TPL and what's your main motivation for holding? 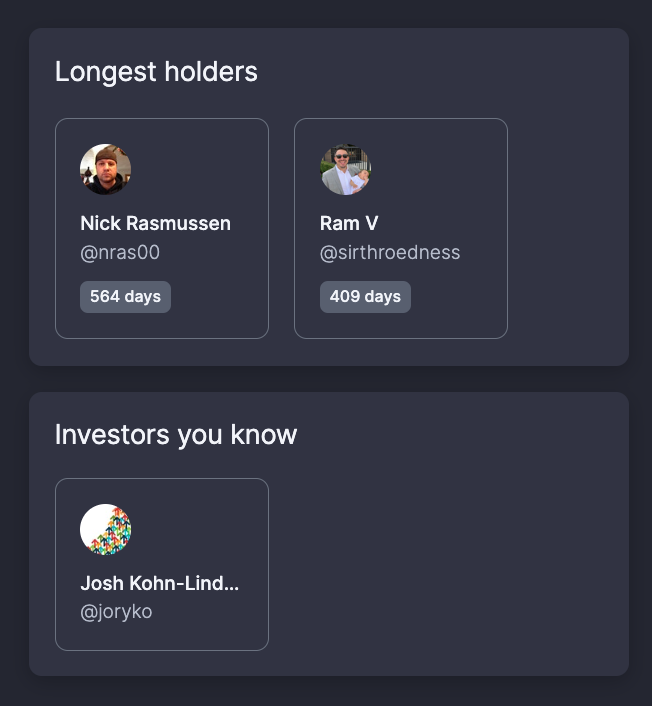 Josh Kohn-Lindquist@jorykoApril 30
@nathanworden I think I’ve been holding $TPL for about 2 years.
As for my thesis, you pretty much nailed it already. Unique oil play based on royalties and barely any operating costs. Wanted some oil exposure and this felt the safest, with tangible land being owned.
As management continues to buy back shares each quarter, it feels like the last person standing (holding shares and collecting increasing dividend payments over the next decade) will see those shares appreciate tremendously.
Rarely can you look at past price performance as an indicator for a stocks future, but I think in TPL’s case you can — and it’s 10-year total return is 2,400%.

Rick Gurner@rick_gurnerApril 29
Texas Pacific Land is slowly, but very profitably, going out of business.
Until the day they run out of reserves, pretty much all their cash will go towards buybacks and dividends. Management is not interested in any crazy acquisitions or sudden moves. Slow and steady.
Main risk is oil prices. Other than that, this one should do fine for the next 19 years.

Nathan Worden@nathanwordenMay 28
Author
@conorvalue same 😅 Such a poetic way to put it!