StockOpine@stockopineJune 20
$31.6m follower assets
Key notes for $PYPL - Recent Conferences
In this memo we will briefly discuss the key points that grabbed our attention while reading the transcripts of the two conferences.
BofA – Company’s participant Dan Schulman, President & CEO – 9 June 2022
Checkout and BNPL

The focus on the core product with ongoing investments around it to drive further engagement and potentially higher transaction revenue per user makes sense as the company recently changed its focus from the net new active accounts growth to average revenue per account growth. As engagement increases, people would spend more on the platform and the platform becomes more appealing to new and/or existing merchants.
It is always good to verify these figures with third party data (a bit outdated but we will follow on this): ↓ 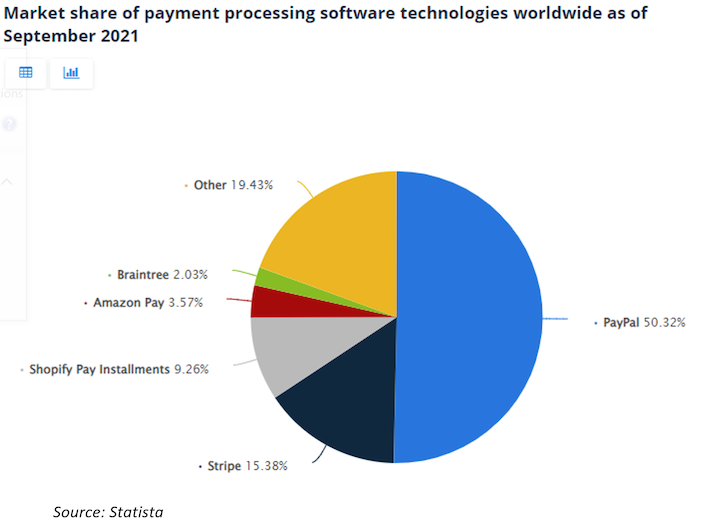 This is somehow similar to the comments made in the latest earnings call by Gabrielle Rabinovitch SVP, Corporate Finance & IR and Interim CFO. It can be implied that higher growth would be generated from Braintree which has a higher funding cost compared to Venmo.
Braintree

We like the fact that there was no further downward revision on 2022 revenues (as it was the case in Q1) but we feel that this might change soon given the developments in the macro environment.
Investments

PayPal has the cash and generates enough cash to support its investments. Being long in the market and successfully managing the eBay transition (from c.40% of revenue to c.2% while maintaining growth) demonstrates that the company can withstand economic downturns (an economic downturn will have an impact on PayPal results due to reduced consumer spending).
CFO replacement
"There’s no shortage of really outstanding candidates that have raised their hands and I’ve been interviewing left and right and over weekends."
Looking forward to seeing who the new CFO will be and what he/she will bring on the table.

As for Venmo, other than the expected launch with Amazon in the 2nd half of the year, it was stated that other large enterprise merchants are doing more than what was anticipated. We are pleased to see that kind of comments as Venmo has higher take rates.

BNPL seems to be a must have offering with Apple recently joining this market (Apple Pay Later) and PayPal responding to the competition with the Pay Monthly Plan (the lender is WebBank) for purchases up to $10,000 (subject to credit approval) over 2 years which offers more flexibility (compared to the Pay in 4 which was for up to $1,500) to consumers that are willing to make larger purchases -> PayPal press release. There are risks in this market as there is lack of regulation and could lead to debt spirals, however, it is very appealing to consumers under the current environment.

Final Thoughts: The wide product offering improves the value proposition both to consumers (think of BNPL, Venmo, Cards, Rewards, digital wallet etc.) as well as to merchants who have access to the massive number of consumers. By reading through the two transcripts, we did not identify any red flags and as a result we remain bullish on PayPal.
Disclaimer: Not a financial advice.
Key notes for $PYPL - Recent Conferences (substack.com)
Key notes for $PYPL - Recent Conferences
In this memo we will briefly discuss the key points that grabbed our attention while reading the transcripts of the two conferences.
stockopine.substack.com

Green Candle Investments@greencandleitJune 20
What a great write up on $PYPL!