BanklessDAO@banklessdaoJune 21
$9.3m follower assets
CeFi Broke. DeFi Didn't.
A post-mortem on Celsius, 3 Arrows Capital, and what it means for crypto
By Donovan Choy for Bankless
Dear Bankless Nation,
DeFi has its flaws, no doubt.
But the bull case for DeFi is not that it’s perfect, but rather a major fundamental improvement from traditional finance.
In web3, blockchain technology enables on-chain monitoring and assessment of protocol activity in real-time.
It’s one of the reasons that DeFi is sometimes referred to as the “wild west” of finance: the transparency of every player’s chips, coupled with the 24/7, 365 nature of crypto means there’s no rest in its fast-moving, high-stakes games.
In TradFi, the chess moves of corporate juggernauts are hidden from view, contained inside centralized private ledgers.
This is to the detriment of the average retail investor — of which this past week’s developments have shown.
The Three Arrows Capital fiasco
The crypto world was shaken to discover that Three Arrows Capital (3AC), one of the largest crypto VC funds in the world, was insolvent.
The exact numbers of Three Arrows’ holdings are still being discovered, but the scattered debris from this past week’s explosive events gives us an estimate of just how down bad they are.
As recently as April, Three Arrows had $3B worth of assets under management, down from the $10B+ range during the crypto boom last year. But that was two months ago, and a lot has happened since then. That $3B is worth a lot less today, due to a series of risky leverage positions and poor risk management decisions that were exposed amidst a macro market contraction.
SOLUNAVAX
The Terra implosion in May hit 3AC with a whopping half-billion-dollar loss from the LUNA hyperinflation. Three Arrows founder Kyle Davies confirmed that the fund made an investment of about $200M in a $1B token raised by the Luna Foundation Guard in early 2022.
A quick look at Three Arrows’ select investments on its official site finds a myriad of altcoins like DOT, SOL, and AVAX, all of which have been hit excruciatingly hard. AVAX in particular — of which the red triangles in both Three Arrows’ founders’ Twitter names signify — is down 87% from its lifetime highs.
GBTC
Dark clouds continue to loom elsewhere on Three Arrows’ balance sheets. First is its large stake in Grayscale Bitcoin Trust (GBTC), an SEC-regulated and publicly-traded Bitcoin fund that allows TradFi to gain investment exposure to Bitcoin without falling astray from regulators.
Since it’s TradFi, the exact numbers of Three Arrows’ GBTC holdings are a mystery. In a December 2020 SEC filing, Three Arrows reported ownership of about ~6% of GBTC shares (39M shares), valued at ~$259 million then. It’s likely that much (if not all) of these have been sold to shore up liquidity. Unfortunately, GBTC is priced at $12.47, down 76% from its all-time-highs. All its GBTC holdings would bring in an approximate half-billion in liquidity, a pittance compared to what is needed to bail themselves out of the current predicament.
stETH
3AC also holds a significant stake in the Lido Finance liquid staking derivative stETH, which represents a long-term bet on the upcoming Ethereum Merge. While the long-term prospects of the Ethereum chain are not in question here, current market volatility and uncertainty of the Merge’s arrival have led ETH stakers to price stETH at a 6-7% discount over past weeks, according to the Curve stETH pool.
On-chain activity by wallets widely believed to belong to Three Arrows saw the offloading of 19,618 stETH for ~19.6 million USDT on 16th June.
Leverage
Finally, the past week’s overall market slump saw Three Arrows suffering up to $400M in liquidations from leveraged trades across FTX, BitMEX and Deribit, further fueling the speculation that the fund lacked sufficient liquidity to meet margin calls on their leveraged trades, and is fast approaching insolvency. 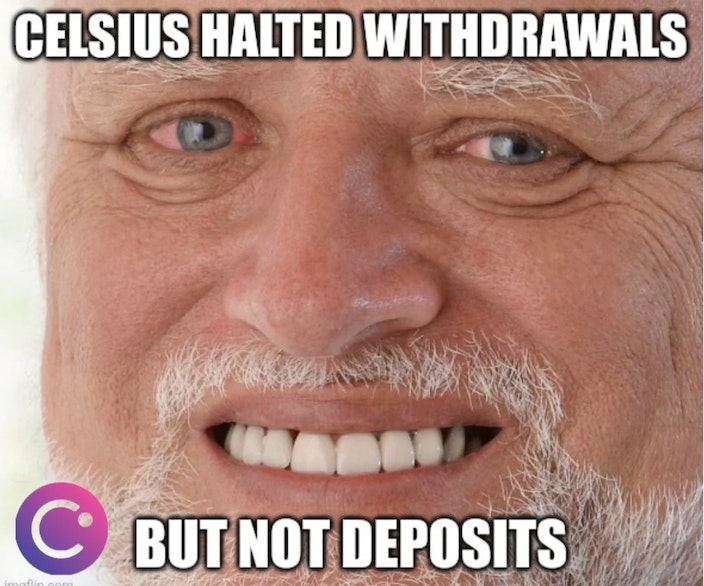 Did one fund tank the entire market?
Three Arrows Capital might be spiraling alone, but the repercussions of its actions are splashing across the market. A potential Three Arrows collapse would impact crypto markets across the board due to its loans from major CeDeFi crypto lenders. Three Arrows-linked firms like Celsius and Babel Finance have already suspended withdrawals, while Finblox imposed a $1,500 withdrawal cap.
A slew of CeFi crypto companies have rushed to distance themselves from the debacle: 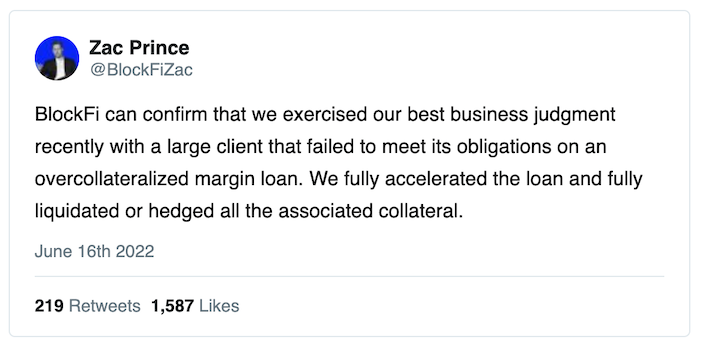 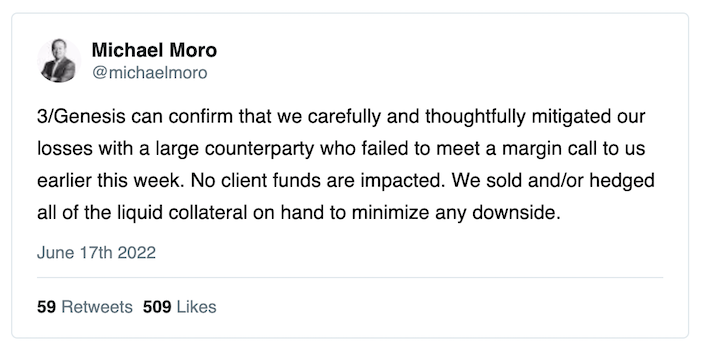 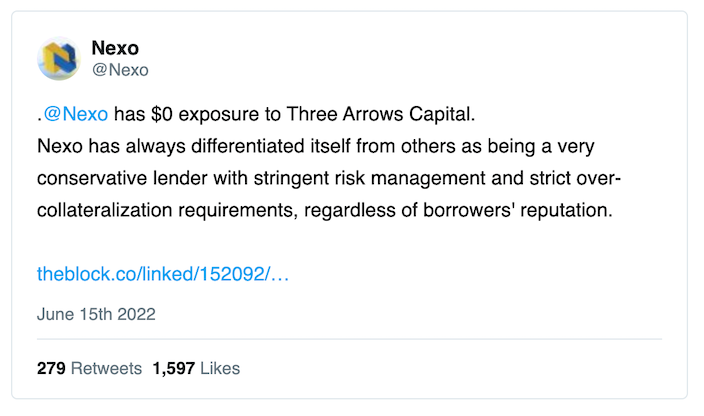 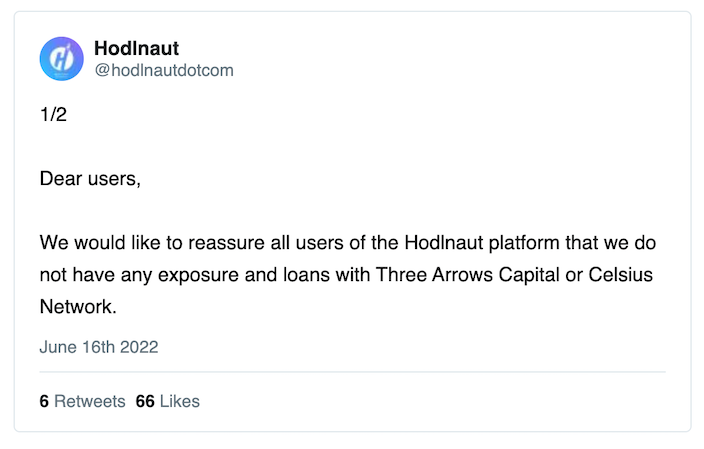 In the meantime, total crypto market cap is down 18% to $901B from $1.1T since news of Celsius and Three Arrows broke last week. Ethereum and DeFi have been hit hard, but with a relief rally underway, it remains to be seen how far the repercussions from this incident have spread, and when the fallout can be considered concluded.
CeFi Broke, DeFi Didn’t
Did you know that in 2022, there are still court cases and legal proceedings dealing with the fallout of the 2008 Lehman Brothers collapse?
When marketplaces break, the lawyers are forced to step in and clean things up. A very long, costly, and human process begins to determine who owns what. When things break, we fall back to the court system manually clear the markets.
Celsius paused withdrawals, swaps, and transfers between all accounts on June 12th; there is no foreseeable date upon which things open up again. Before that happens, Celsius will need to figure out how to regain solvency, and that’s likely going to require signatures to be put on documents.
If the crypto markets take another tumble down, and Celcius’s 30k wBTC MakerDAO vault gets liquidated, it’s going to go from a ‘simple’ cleanup, to a catastrophically messy one, that is sure to bring expensive legal battles with it.
Meanwhile, the juxtaposition between Centralized Finance and DeFi couldn’t be more clear. ‘Contagion’ has been a big word lately, as the liquidation of Three Arrows Capital has created insolvent 3rd parties, which has created a contagion event acrosscentralized liquidity providers.
Meanwhile, DeFi is doing just fine. 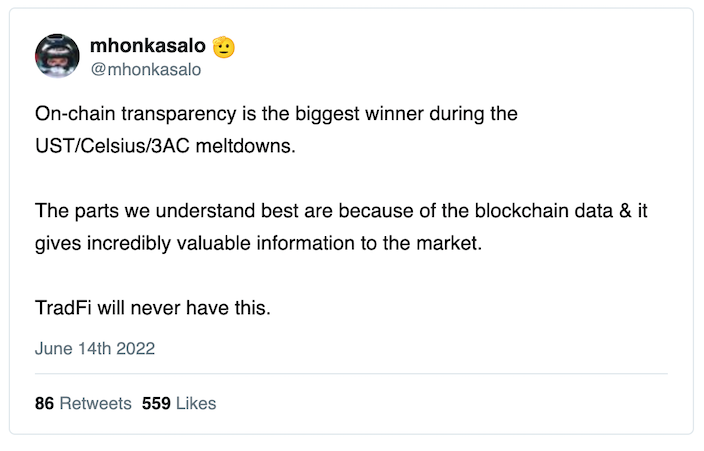 I hope the regulators are taking note. DeFi markets are orderly and efficient. No DeFi app has paused withdrawals or required emergency financing. Unlike 3AC, DeFi apps don’t ghost their creditors. All of the noise, drama, and bloodshed in the last week has come from centralized players. 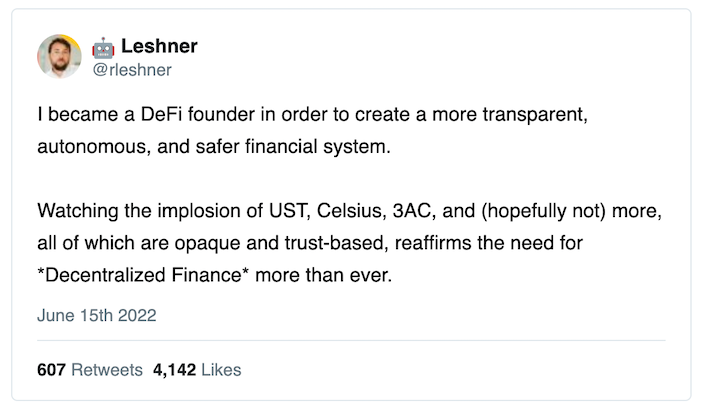 So while this last week in crypto looks bad from an external vantage point, we should emphasize to those critiquing our industry that crypto is doing just fine.
It’s the centralized players around crypto that broke down.
CeFi broke. DeFi didn’t.
— Donovan (Twitter)
Donovan Choy (@donovanchoy) | Twitter
The latest Tweets from Donovan Choy (@donovanchoy). 🇸🇬 I write at @BanklessHQ "Now I am about to take my last voyage, a great leap in the dark
email.mg1.substack.com
No comments yetBe the first to add your insight!