Nathan Worden@nathanworden11/23/2020
$332.5m follower assets
Merger Arbitrage
About a month ago, Marvell (the semiconductor company, not comics) announced a merger with Inphi (which provides high-speed data for the cloud).
This is a good opportunity to learn about a strategy called 'merger arbitrage' which hedge funds use.
Two days ago I posted a memo about the spread between Inphi's market value ($7.7 billion) and what Marvell was planning to pay them for the merger ($10billion). Often the acquiring company pays a premium to the acquired company because of the perceived "synergy" between the two businesses.
Here are the specifics of what this spread looks like as of now (thanks to @sraone for pointing this out):
For each $IPHI stock, shareholders will get 2.323 shares of the combined company plus $66 in cash.
As of right now, $IPHI is trading at $148.20
$MRVL is at $43.90
2.323 shares times $43.96 + $66 in cash is $168.12
So, presumably, if you buy Inphi now for $148, you will make a $20 spread once the deal goes through. This is about a 13% upside... is this free money?
Not so fast.
The deal isn't supposed to go through until the second half of 2021. Between now and then there is a lot that can happen: Inphi shareholders don't appear to be happy with the deal and may vote against the takeover. Additionally there will be a good deal of regulatory scrutiny over the deal.
Hedge funds look at the acquisition and try and estimate the likelihood that the deal goes through. The less likely, the lower the price Inphi shares will trade at. As the date of the merger gets closer, the arbitrage spread gets smaller and smaller because it looks more likely that the deal will go through.
Below is a graph based on a study which shows the median arbitrage spread steadily declining as the date of the merger approaches. Interestingly, for failed deals, the spread is much more choppy, and a couple of days before the deal, it shoots up. This is the market signaling its distrust that the deal will go through.
I personally will not be trying to capitalize on this merger arbitrage, but these kinds of situations come around fairly often (think Teledoc and Livongo earlier this year), so its useful to have a framework for thinking about this type of strategy in your back pocket. 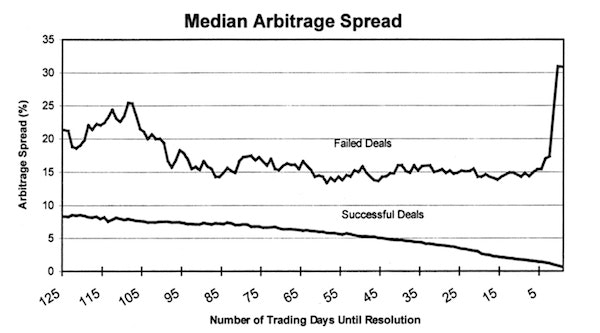 Josh Worden@worden.josh11/23/2020
I wouldn't touch this with a 10-foot pole! Especially since the 13% bump feels like a best case scenario and it's not at all going to happen immediately

Nathan Worden@nathanworden11/23/2020
Author
Yeah, definitely not as common of a retail strategy. But something to be aware of. For example: I owned both Teledoc and Livongo before they announced their merger. After the announcement I was going to keep adding to both, but because of the merger arbitrage spread, I decided to put Teledoc’s allocation into Livongo, because if the deal went through I would be rewarded. If the deal didn’t go through, I didn’t care because I was wanting to add to Livongo anyway.

Sravan Vegunta@sraone11/24/2020
Thanks for the shout out bud. You are absolutely correct. As an investor you should understand Merger Arbitrage and you can use it to your advantage sometimes. BTW... I did the same thing with LVGO and TDOC.
On a side note, if anyone is interested there are ETFs these days that focus on just Merger Arbitrage. For eg. like MNA.