Devin LaSarre@devinlasarreJanuary 8
$20.5m follower assets
The Pits
“The person that turns over the most rocks wins the game.” - Peter Lynch
Peter Lynch’s One Up On Wall Street remains one of my favorite books on investing. It’s timeless and full of sensible business analysis and stock selection lessons, and despite knowing the book cover to cover, I still revisit it about once a year. My favorite passage is him talking about the pits - rock pits.
Rock pits are one of the greatest potential investments on the planet. They literally are planet. Rock aggregate has all kinds of uses and is needed in all kinds of places. But as Lynch points out, rocks are heavy, and if you need to buy rocks, you need to buy them from somewhere nearby - otherwise, the transportation costs would make it completely uneconomic. This simple dynamic makes every rock pit a local monopoly. If you’re an owner, you can simply raise prices to just under the threshold of the transport costs of the next closest rock pit. You sell your rocks in peace. Life is good.
The pits are seen by most as completely boring, with nothing notable or spectacular about them. That’s partly what makes them so amazing. It’s not a flashy high-growth industry. There are never sensationalist headlines. There’s no frenzied buying or bubbles. No radical disruption. No IP to protect. It’s an unassuming business, providing something critical with favorable dynamics bound by physics - it most certainly cannot be outsourced overseas.
There are few assets as beautifully simple as the pits.
There is a second reason I love rock pits.
My town has a lake. It has a few issues. Each year, overgrowth and algal blooms paint the water an odd green. More concerning is that the lake has a track record of becoming unsafe during certain seasons due to high E. coli and fecal coliform bacteria levels. I do not swim in the lake.
The town, for decades, also had a large quarry. It supplied aggregates for industry, construction, and the like, supporting a great deal of local economic development. Eventually, production wound down, leaving behind only giant holes in the ground.
After years of idleness, the local government purchased the land and worked with ecological groups to turn the pits into self-sustaining lake systems. It was a bold plan, but to claim it was a success would be a gross understatement. The area is flourishing. Early morning, you can head out in a kayak, and the water is so clear you can see 40 feet down, gaining a glimpse into a magnificent ecosystem. It feels like magic.
I look around and wonder how much of this area’s foundation was built in thanks to the quarry. Now, new generations are growing up here, enjoying the new lakes, and probably have no idea what they once were. Long live the pits. 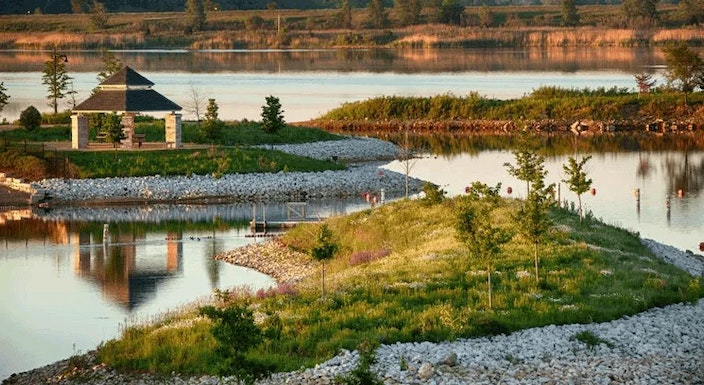 Enjoy this piece? Sign up for the newsletter at the link below:
https://open.substack.com/pub/invariant/p/the-pits?r=1i3d9i&utm_campaign=post&utm_medium=web
open.substack.com
The Pits
A beautifully simple asset.