The Science of Hitting@tsoh_investingNovember 18
$34.8m follower assets
The Early Days of Dollar Tree
An interesting story on the birth of an industry (source material: "One Buck At A Time").
In the mid-1980's, Macon Brock and his team were running a chain of U.S. mall-based toy stores called K&K. However, the times were changing: competition was rising, the industry was evolving (video games), and suppliers like Mattel and Nintendo held a strong hand relative to small vendors ("we couldn't get the merchandise we desperately needed from Nintendo").
That all changed one day in 1986, when a member of K&K's leadership team walked into a mall and saw a store called "Everything's A Dollar". The store, which was only the size of a small convenience store (few thousand sq ft), featured plastic bins filled with closeout merchandise ("costume jewelry, discounted toys, candy, etc."). It was a treasure hunt experience, with the K&K man noting that some of the merchandise seemed like "a heck of a buy for a dollar".
After kicking around the idea, K&K management realized that they would bring much to the table if they pursued this route: they had operated a similar business model (predecessor to K&K), they had relationships with key vendors in the U.S. and abroad who could supply a wide range of goods (SKU's) for the new store, and they already had a fleet of leased tractors and company-owned trailers that would enable them to move merchandise. (And they'd no longer be reliant upon 2-3 key suppliers, the issue they faced in the toy business with Nintendo).
This paragraph, from Brock's book, is noteworthy:
"All of this added up to a single overarching theme: we could operate a chain of dollar stores better than the people already doing it. That is, our stores would be better, and we'd be better at running them... Not surprisingly, once we got started, the 'Everything's A Dollar' folks were unhappy with us. They accused us of ripping off their idea. I can understand why they felt that way, but the charge was off the mark. We ripped off what they wanted to be, not what they were."
Out of a toy business that undoubtedly faced a difficult future, Dollar Tree was born. Today, it's a chain of 8,000+ stores with ~$14 billion of annual revenues and ~$2.5 billion of annual operating income. If management had not been willing to consider a new route, while also leveraging the advantages developed out of K&K, they would've missed this opportunity. 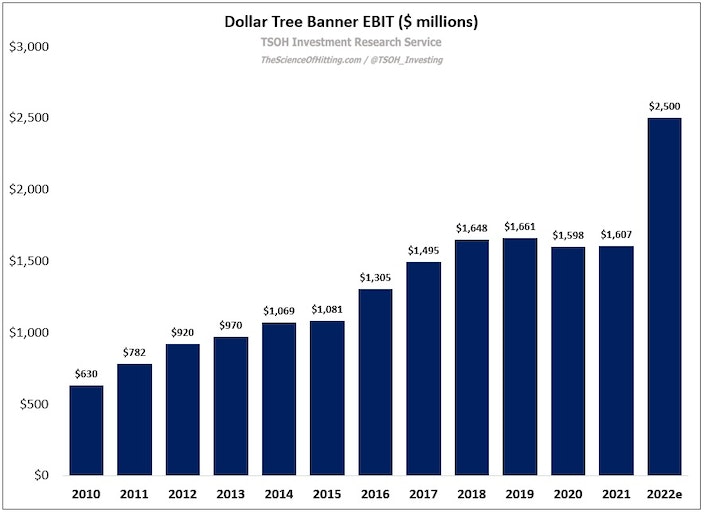 thescienceofhitting.com
TSOH Investment Research Service
A deep dive equity research service from an experienced buyside analyst focused on achieving long-term investment success. Includes 100% portfolio transparency, with quarterly updates and the disclosure of ALL changes before they’re implemented. Click to read TSOH Investment Research Service, by The Science of Hitting, a Substack publication with tens of thousands of readers.
No comments yetBe the first to add your insight!