Conor Mac@investmenttalkMay 11
$319.2m follower assets
Starbucks Reaches 65 Unionised Stores
When I first wrote about the union in February, 88 stores had filed to request a union vote. By March, 141 stores had filed and 6 stores had officially unionised. Today, the approximate number of unionised stores is 10x that, at 65 across the country with only ~12% of stores voting no. $SBUX 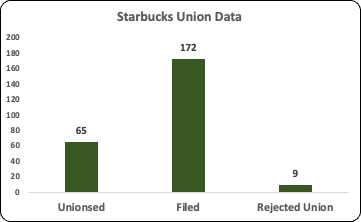 Whilst still a fraction of the overall base, the momentum is continuing. In the earnings call, we finally had someone from Starbucks address the topic head-on. In his opening remarks, Schultz would remind listeners that “our values are not and never have been the result of demands or interference from any outside entity”. He would continue to outline new benefits that would be rolling out to non-union parts this fall. Benefits include; wage hikes, a new partner app, improved tipping functionality, reinvestment in stores, extending training hours from 23 to 40, and the reintroduction of Starbucks’ Black Apron, Coffee Master and Origin Trip programs.
Naturally, nobody at the SWBU had their own narrative, claiming that Starbucks would be refusing access to said benefits for unionised stores.

This, being contrary to what Schultz actually said, simply remarking that these benefits would not be unilaterally granted to unionised stores because of the mandatory bargaining process that has to take place. They will be offered, at which point the SBWU are obliged to accept or counter.

If the SBWU “demand these modest improvements be given immediately to all workers”, then that is the ideal outcome for Starbucks too? I foolishly said as much under that tweet and was called every name under the sun by a gang of unionists. Lesson learned. These benefits are no doubt to control the narrative and persuade partners to buck the union. The SBWU would call it “union-busting”, but at the end of the day, are unions not there to ensure benefits like these come to pass?
Equally intriguing, Starbucks has decided to move up their December investor day to September, to show off both their “pipeline of disruptive innovation” and their “coming transformation and reimagination of the Starbucks customer and partner experiences”. I suspect this was also done to get ahead of the curve on the union drive and show off their spangly new benefit plan. All in all, this union isn’t showing signs of retreating anytime soon, but Schultz and the gang are doing everything in their power to halt it. I have spoken before about the ramifications on margins and the fact that a union for Starbucks makes little sense. So, will leave you with the points that Autumn Capital outlined last quarter on the problems with unionising low-skilled service workers

Eric Messenger@wall_street_deeboMay 13
I know $SBUX looks great from a performance perspective. I haven’t heard rumblings from their employees sounding as unhappy as Amazon’s, but I also don’t consume media outside ESPN and CommonStock anymore. I agree that it would probably be a temporary headwind as plenty of companies cooperate with unions. It may stop me from buying right now, but if I was holding, I would continue to do so.

Scoreboard Investor@scorebdinvestorMay 11
As an investor, I am interested to see how the unionization affects the ability to recruit new employees. A few questions I have that I think can affect that:

I think for high school/college age kids that are working there part time could potentially be pushed away due to the union. Just a thought
A quick note on collective bargaining, when going into initial negotiations, the contract starts at zero. It does not start at existing benefits/wages.

Conor Mac@investmenttalkMay 11
Author
@scorebdinvestor
• All employees, if the store is unionised, then its controlled by a union.
• Don't believe so.
• There is one body, the SBWU, representing all stores, but to my knowledge, Starbucks has to negotiate on a store by store basis for some things. For broad wage increases, I am guessing this will be some synergy there if there are X unionsed stores in the same vicinity, but would maybe vary when they start go cross-state.
Still reading up on the specific ramifications, but there is a lot of propaganda on both sides, lol.

Scoreboard Investor@scorebdinvestorMay 11
@investmenttalk after being involved in 3 unionization efforts, it’s all propaganda - from all sides lol

Jensen Butler@jensenMay 11
@scorebdinvestor oof that's bold. So you're saying I should not be as concerned surrounding the unionizations? I literally just began building my $SBUX position after eyeing it for couple years.

Scoreboard Investor@scorebdinvestorMay 11
@jensen there are plenty of incredibly successful companies that operate in partnership with unions. Not ideal, but I think it’s just a short term headwind. It does not affect my long term outlook on the company. Just my thoughts

Joshua Simka@tomatoMay 12
@scorebdinvestor @jensen People still gonna be addicted to their daily $SBUX coffee long after the union issues blow over. ☕ Stock's down 44% from recent highs... looks like an excellent time to buy.

Jensen Butler@jensenMay 12
@tomato my thoughts as well. Caffeine is addictive, so they say… 🐸☕️