Jennifer@jennymanydotsJune 21
$14.8m follower assets
Manganese - My Missing Metal
I have written about nickel, copper, and vanadium (maybe I have a subconscious goal of owning the entire periodic table!) but I recently started looking into manganese and there are a number of reasons to be bullish on the metal I was missing from my portfolio. 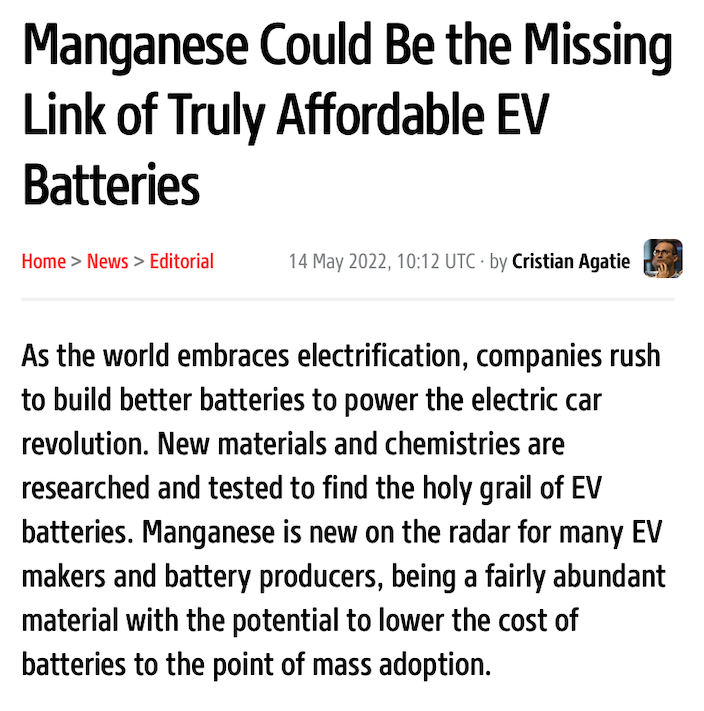 Elon Musk has indicated that high-manganese batteries would use half the nickel and no cobalt. Volkswagen thinks their lithium nickel manganese oxide chemistry could reduce cathode costs by 47 percent compared to nickel-rich designs. And since the unified cells can use multiple chemistries, Volkswagen would be able to cover a wide price range with their batteries. This means using LFP batteries for the most affordable models, high-manganese for mainstream models, and keeping the high-nickel type batteries for the performance models.
The importance of manganese is huge, considering that raw materials availability and prices are now a limiting factor in ramping up Li-ion battery production. 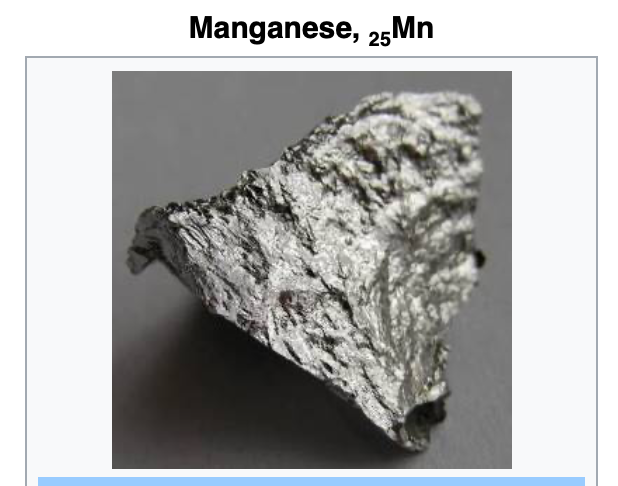 After doing some research the past few weeks, I added a company that I believe has some promise and it looks like Sprott Research thought so too because they just initiated coverage. See details at the end of this post about the Canadian Manganese Company Inc. and why Sprott Equity Research & I like it. 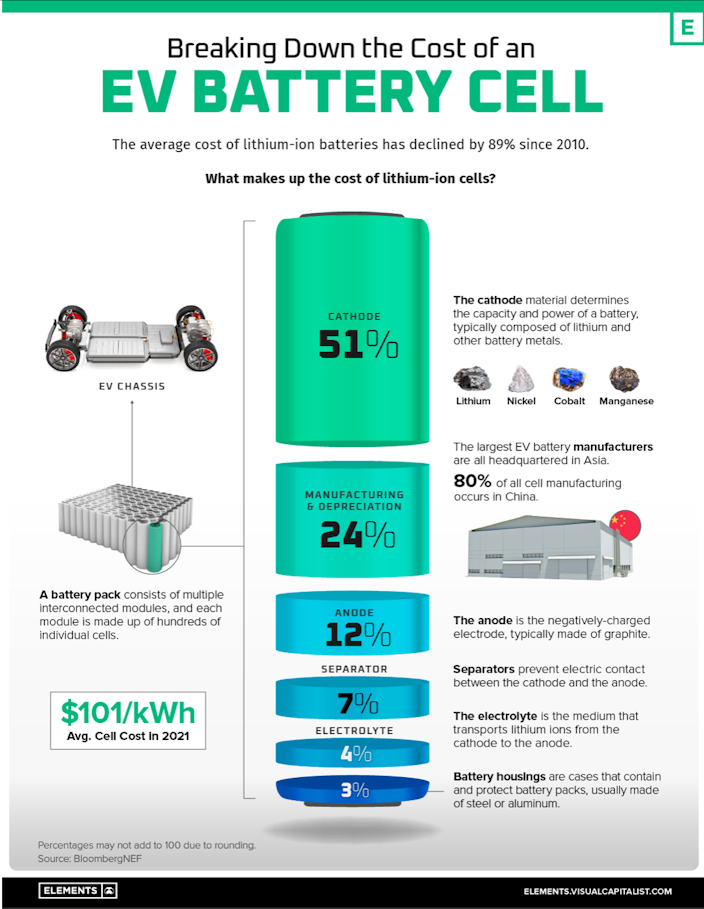 Two of the most prominent EV makers in the world, Tesla and Volkswagen, consider manganese as the next best thing in the quest to find the ideal battery for electric vehicles. The metal sits at number 25 in the periodic table in between chromium and iron and could make mass production of Li-Ion batteries possible, without worrying about the scarcity of raw materials like nickel or cobalt.
Elon Musk revealed at the opening of Giga Berlin in March that Tesla is considering manganese for its potential in mass-producing Li-Ion batteries. High-manganese chemistries allow cutting down on nickel use, which is both expensive and difficult to source. Musk wants Tesla to operate at a giga-scale and for that, it needs batteries that use abundant raw materials.
https://www.autoevolution.com/news/manganese-could-be-the-missing-link-of-truly-affordable-ev-batteries-188770.html
Canada recently added manganese to their list of critical minerals: 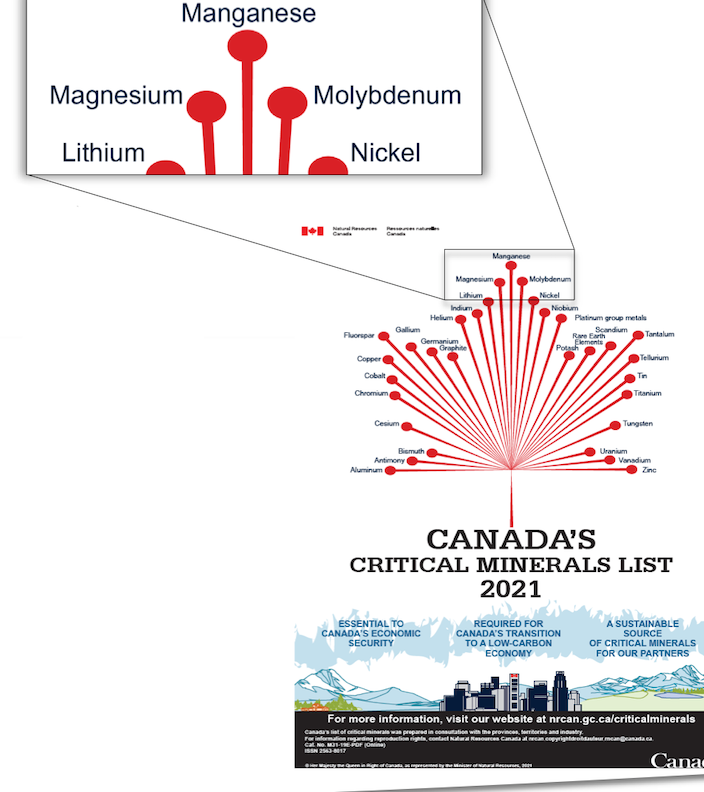 Despite being a major producer of steel alloys, China accounts for only 4% of global manganese ore production and a negligible amount of chromium ore production. It is therefore becoming heavily reliant on imports of these raw materials.
According to the Mineral Resources Program conducted by the US Geological Survey, the US is entirely reliant on manganese imports as it has no production capacity of its own. The US’ situation is echoed in most industrialized countries, including those in Europe. According to the US Geological Survey, manganese ore containing 20 percent or more manganese has not been produced in the US or Canada since 1970.
"Manganese will enjoy a five-fold increase in use for batteries between now and 2040." 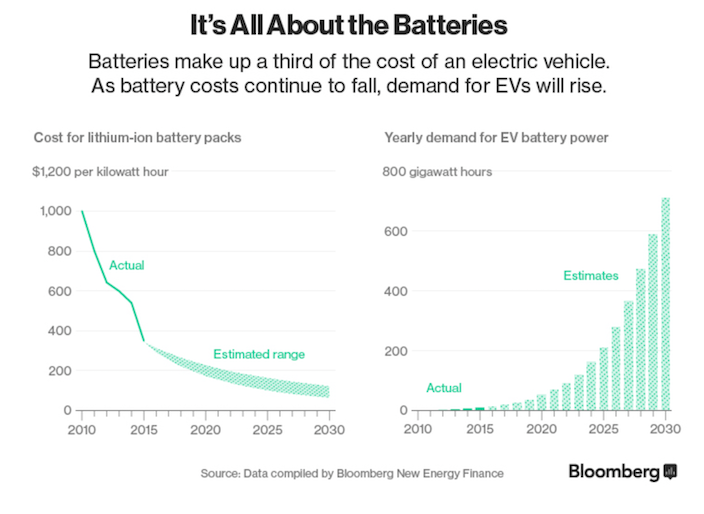 In terms of the outlook for bulk alloy metals, only manganese shows any major shift in demand patterns over the long-term outlook. Several novel cathode chemistries use manganese, and this will underpin growth in demand from the batteries segment. When compared to other common cathode metals, wider geographic distribution, greater scale of production and larger reserves offer better security of supply for manganese. Moreover, production costs are an order of magnitude lower than for cobalt and nickel, which also face ESG concerns. As a result, manganese will enjoy a five-fold increase in use for batteries between now and 2040.

Other large purchasers of new battery technology are shifting to NMC batteries, including 3M (NYSE:MMM), BMW (ETR:BMW), General Electric Company (NYSE:GE) and Duracell.
Manganese is also used in the nickel-metal hydride (NiMH) batteries seen in hybrid vehicles, including the Toyota Prius, and in up-and-coming lithiated manganese dioxide (LMD) batteries. LMD batteries, which consist of 61 percent manganese and 4 percent lithium, are said to have higher power output and better thermal stability and are safer than regular lithium-ion batteries.
https://investingnews.com/innspired/manganes-critical-steel-battery-ev-metal/ 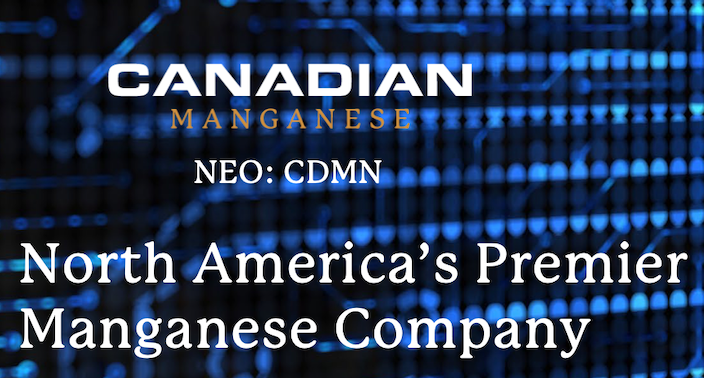 Sprott analyst Justin Chan had the following to say about $CDMN.NE:
Carbonates are the green alternative to Chinese supply
Manganese is an important component of the NMC (M for Manganese) Li-ion battery chemistry. Currently 91% of supply comes from China, with an increasing share from the environmentally taxing oxide ore-calcination- electrolytic manganese metal (EMM) supply chain rather than the cleaner manganese carbonate ore – high purity manganese sulphate monohydrate (HP MSM) supply chain. The key difference is that manganese oxide requires calcining with high heat and coking coal, a highly carbon intensive reaction. Manganese carbonates are lower cost and lower emissions and we think Woodstock is the best undeveloped project. 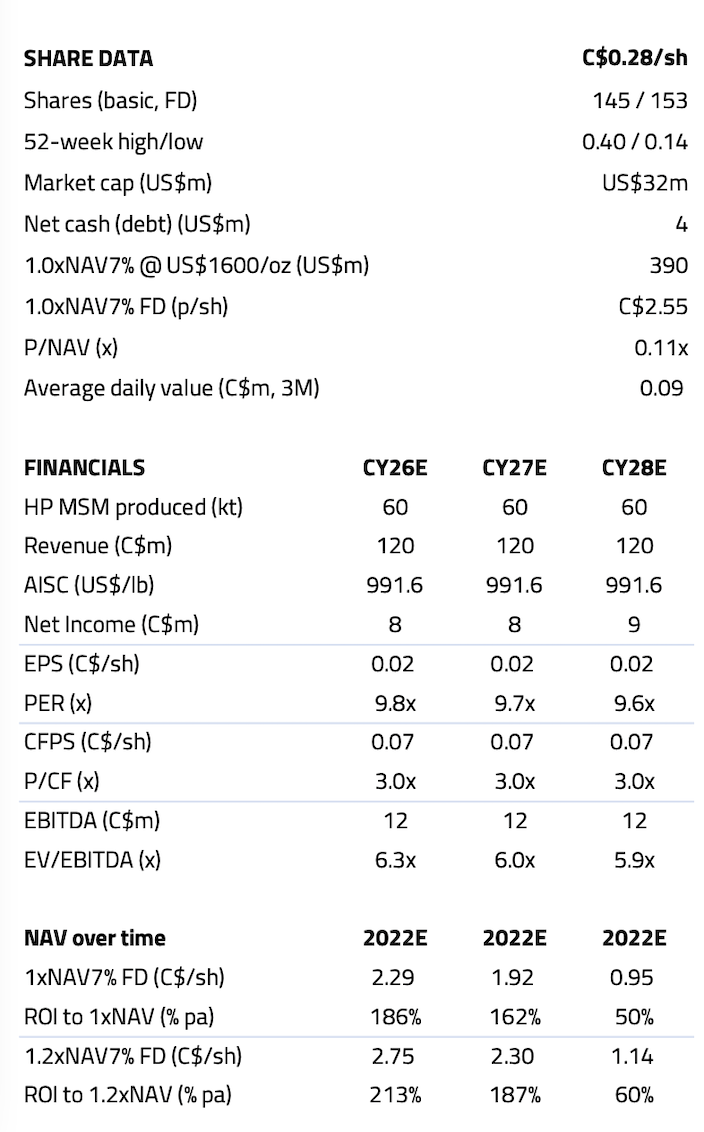 Nice insider buys from President & CEO Matthew Allas on the public market in the month of May: 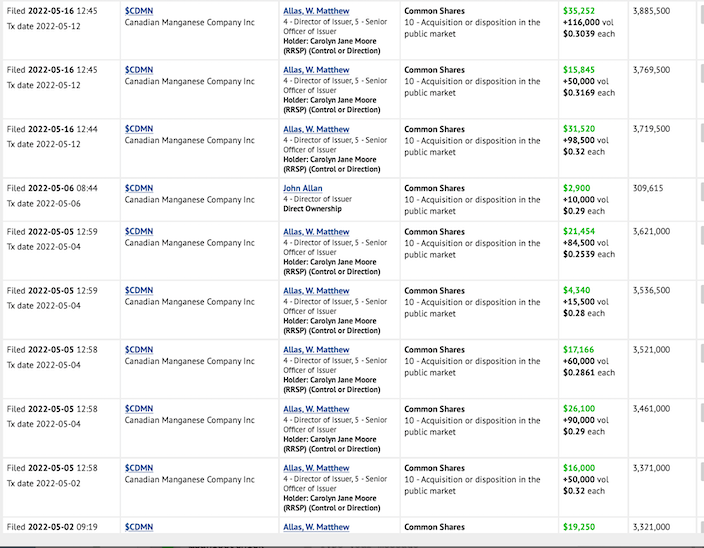 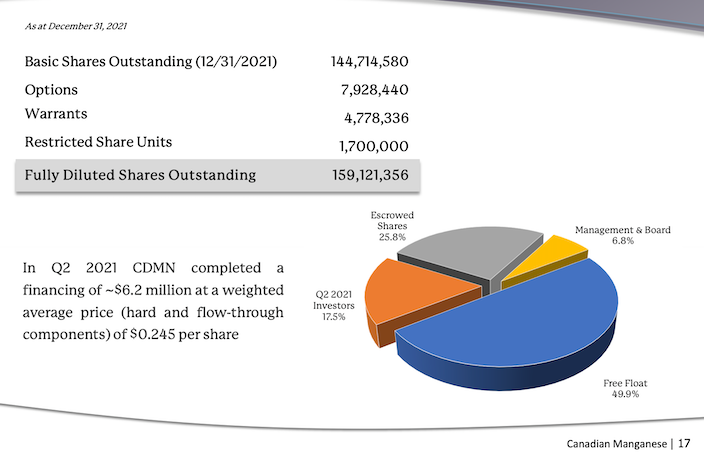 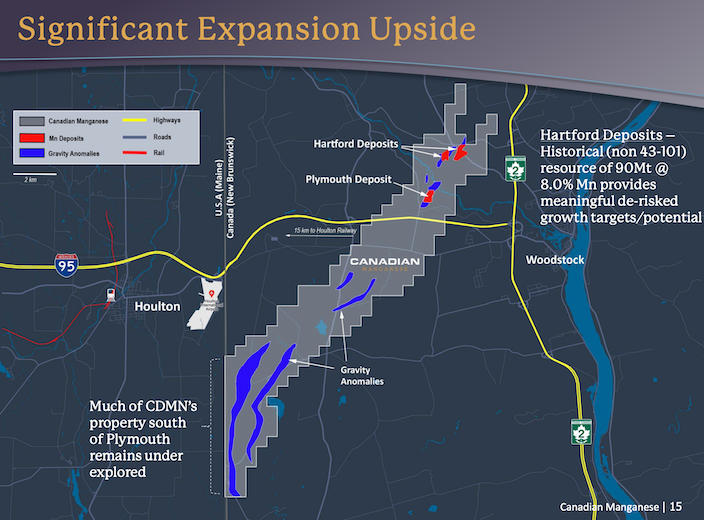 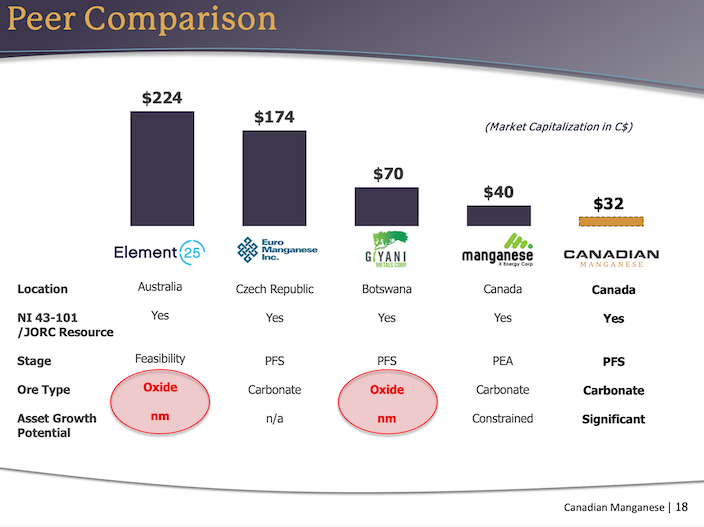 Global electrification initiatives focused on reducing carbon emissions are critically dependent on the security of long-term mineral supply. Current resource extraction and refinement practices lack sufficient attention to the ESG impacts. We believe the development of sustainable regional supply will establish new market leaders.
-Canadian Manganese Company Inc.
As always, please DYODD and don't hesitate to ask any questions - I will always do my best to find you an answer.
Junior Mining is a high-risk sector and I never invest more than I can afford to lose. For me, that's usually a 1-2% allocation, sometimes a maximum of 5% depending on my conviction. Currently CDMN.NE sits at 1.5% in my portfolio, and I am considering increasing my position.
https://www.mining.com/web/demand-for-steel-alloys-grows-as-the-energy-transition-gains-momentum/
https://www.visualcapitalist.com/breaking-down-the-cost-of-an-ev-battery-cell/ Breaking Down the Cost of an EV Battery Cell
The average cost of EV batteries has fallen by 89% since 2010. What makes up the cost of a single EV battery cell?
Visual Capitalist
No comments yetBe the first to add your insight!