Edmund Simms@valuablJuly 25
$27.8m follower assets
Cost of capital, July 21, 2022
Interest rates and capital costs are capitalism's most consequential yet misunderstood prices, connecting the future to the present.
•••
The European Central Bank (ECB) raised interest rates by 50bp, the first increase in 11 years. Consumer prices have risen 8.6% in the past year, forcing the bank to do something. Russia’s invasion of Ukraine has created an energy crisis, and consumer confidence indicators are already pointing to a slowdown. Increasing the rate will strain public and private spending, but inflation needs to be controlled. It is unclear whether the bank will keep raising the rate.
Rates are only part of the job. Christine Lagarde, and her troop of central bankers, must also figure out how they will buy bonds to prevent the yields of highly indebted countries from exploding and triggering a debt crisis—all without stoking inflation. Italy looks particularly shaky. The government owes a lot, and the prime minister, Mario Draghi, has resigned. 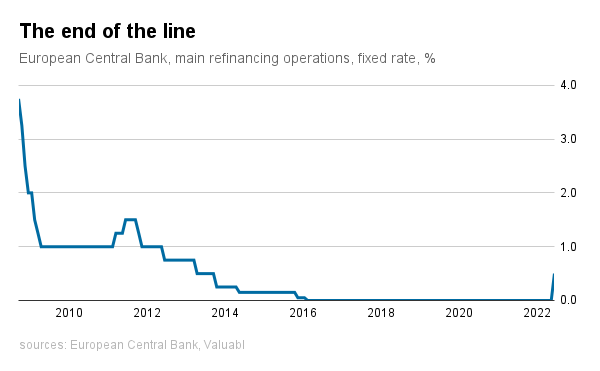 Stock markets rose last fortnight. The S&P 500 $SPY, an index of big American companies, rose 3% to 3,960. The market has fallen 17% since January and 8% over the past year. Investors added $2.4trn to global stock markets (see: Global stocktake) while discounting the price of risk for both equity and debt.
Traders have mixed feelings about the effects of inflation on stock valuations. They’re also mulling over whether the Federal Reserve, America’s central bank, can control inflation without destroying the economy. Punters are reckoning with the uncertainty of when and at what level rates will stop rising and how these higher borrowing costs will impact corporate earnings. 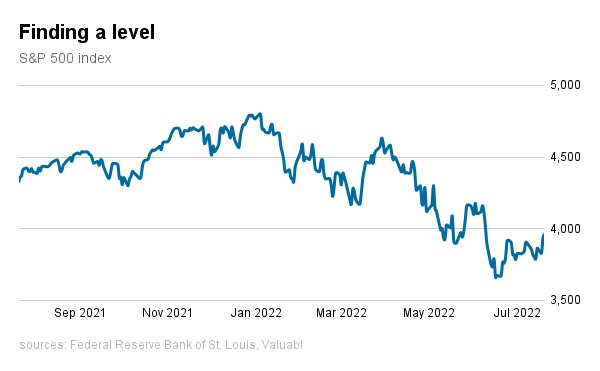 The price of government bonds fell. Yields, which move inversely to prices, rose as inflation expectations did. The yield on a ten-year American Treasury bond, a key variable for valuing financial assets worldwide, rose by 8bp to 3%. Bond investors’ forecasts for inflation over the next decade rose by 9bp to 2.4% per year.
Consequently, the real interest rate, the difference between yields and expected inflation, fell by one basis point. Fixed-income investors expect to increase their purchasing power by 0.6% per year. This return is 166bp better than a year ago but is still pathetic. 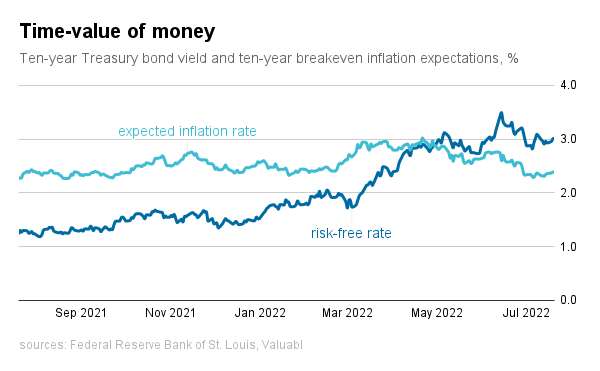 The equity risk premium (ERP), the extra return investors want for buying stocks instead of bonds, dropped. It fell 36bp last fortnight. The current 5.5% premium is slightly higher than the average over the past five years of 5.1%. It is up 74bp since January and 155bp over the past year.
The cost of equity, the return stock-investors demand to part with their money, is 8.5%, down 28bp from last fortnight when Valuabl last went to press. Equity costs—which we can think of as expected returns—have risen 223bp since January and 333bp in the past year. Stock buyers demand a much larger return now than they did then.
Financiers want both a higher risk-free return and a higher risk-adjusted return. Rising capital costs have hit both public and private valuations. Early stage private investment, from seed to venture to private equity, will continue drying up as the rise exposes the mismatch between entrepreneurs' and capitalists' valuation expectations. Klarna, a buy now pay later company, recently raised $800m at a $7bn valuation, down 85% from the $46bn valuation a year ago. 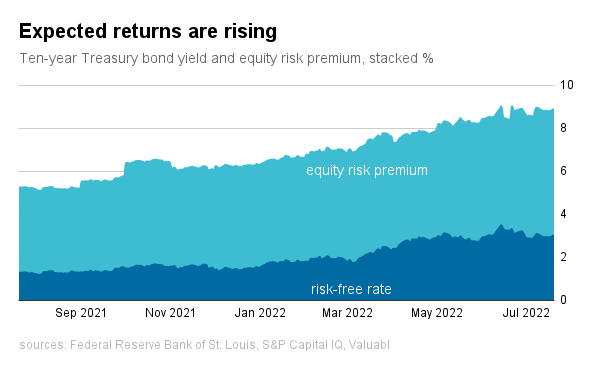 Creditors are charging less for risk than they did a fortnight ago. Corporate bond prices rose slightly as government ones fell. Credit spreads, the gap between corporate bond and Treasury yields, on BBB-rated bonds, fell 12bp. These spreads are up 73bp since the start of the year and 79bp over the last 12 months.
Risk is getting increasingly expensive, particularly for speculative borrowers. But at the other end, spreads on AAA-rated bonds have fallen over the past quarter. They’ve dropped from 66bp to 60bp. Bond investors are shifting out of speculative credit and into investment-grade assets.

Using the average ERP of the past five years, the current ten-year Treasury bond yield, analysts' consensus earnings estimates, and a stable payout ratio based on the S&P 500's average return on equity over the last decade, I value the index at 4,266 compared to its level of 3,960. The slight drop in earnings forecasts was slightly offset by the decrease in equity costs over the past two weeks. Consensus earnings for 2023 fell to $249.13 from $250.70. 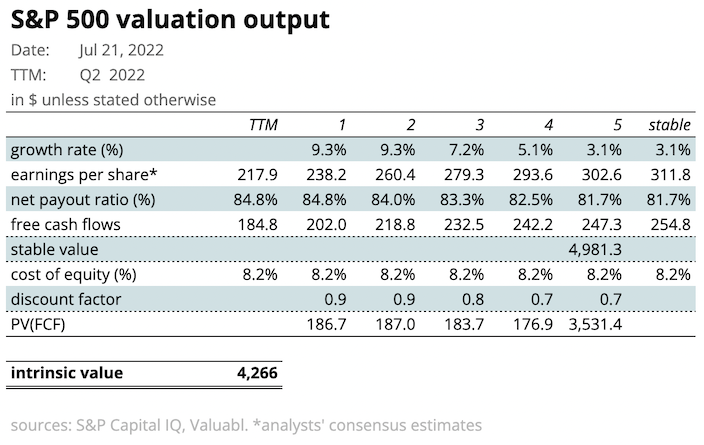 This valuation suggests the S&P 500 index is 7% undervalued compared to 9% overvalued at the start of the year and 21% overvalued last year. Although investors buying stocks can expect an 8.56% per year return at these prices, the index isn’t good value. 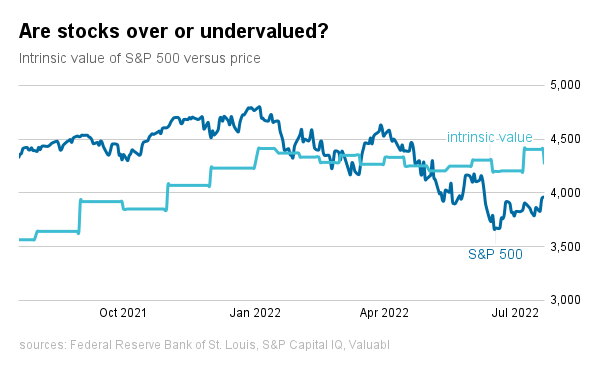