Jennifer@jennymanydotsNovember 19
$23.4m follower assets
Investor Info for Your Weekend
I could spend 24/7 listening to podcasts, watching YouTube videos, and reading articles, tweets & Commonstock posts. I'm always grateful for those that pass links onto me, yet another one of the many benefits to be gained from the Commonstock & Twitter communities. Sometimes it's difficult to make time for it all, but here are a few I think are worth your time this weekend - if you can only make time for one, go for Lassonde at the end!
Brunswick Exploration I Red Cloud Fall Mining Showcase 2022
https://www.youtube.com/watch?v=gX5pl7VuiqI
I've mentioned Brunswick since May but I must admit that I was shocked when I scrolled through my Commonstock feed to see that I haven't written a specific post devoted to it. $BRW.V is potentially the largest lithium exploration play in North America, perhaps the world - and a legendary geologist is in charge. Check out my Twitter post below, as well as the Red Cloud video above.
https://twitter.com/jenstilmanydots/status/1521296582540288001?s=20&t=-_I7N2ZnW0CygPRPstyQ8A 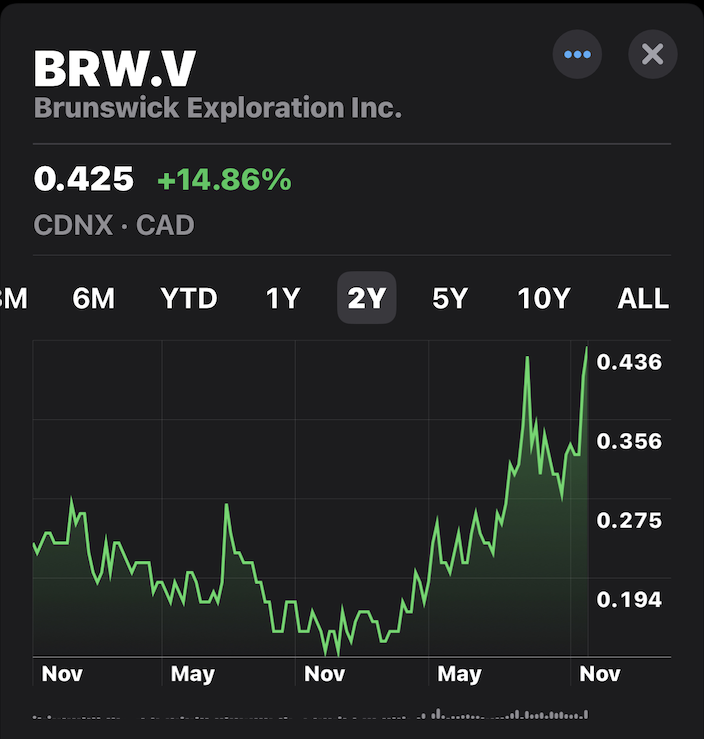 Adam Rozencwajg: Oil, Gas Uranium - "Unbelievable" Opportunities to Invest
https://investingnews.com/adam-rozencwajg-unbelievable-opportunities-invest/
Adam Rozencwajg, managing partner at Goehring and Rozencwajg, said global governments are still failing to make adequate energy investments. While that's not good news, it does present opportunities for investors.
"I think investors here have been given an unbelievable opportunity to potentially add to or establish some energy positions before what I think is going to be a very difficult winter," he told the Investing News Network.
Rozencwajg emphasized that although the Russia-Ukraine war has thrown energy security into focus, especially in Europe, it's an issue that has been building over the past decade due to a serious lack of investment in supply. 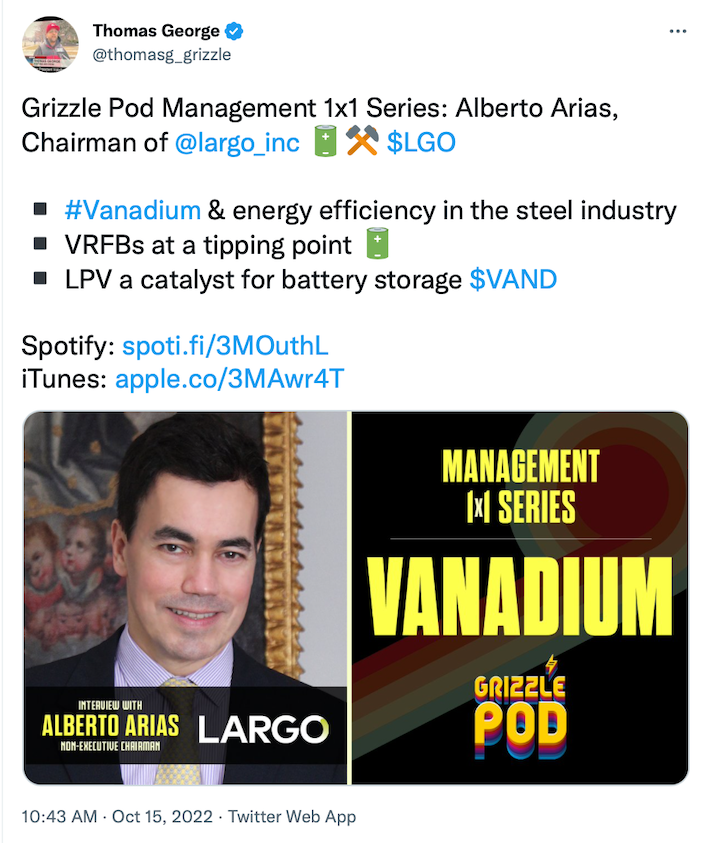 https://podcasts.apple.com/ca/podcast/management-1x1-series-alberto-arias-chairman-of/id1553837131?i=1000582746801
If you are interested in the vanadium space, this is an outstanding Grizzle Pod interview with the CEO of Largo. No doubt you will see why I am bullish on the metal.

MacroVoices #350 Mike Green: Investing Opportunity in an Increasingly Uncertain World
MacroVoices welcomes Simplify Asset management chief strategist and portfolio manager, Mike Green to the show. Mike was the first person to bring up World War III to MacroVoices but he’s not talking about nuclear armageddon - he is talking about growing conflict between Russia, United States and China. This interview will focus on the economic and trading implications of the new war cycle.
https://podcasts.apple.com/ca/podcast/macro-voices/id1079172742?i=1000586611820 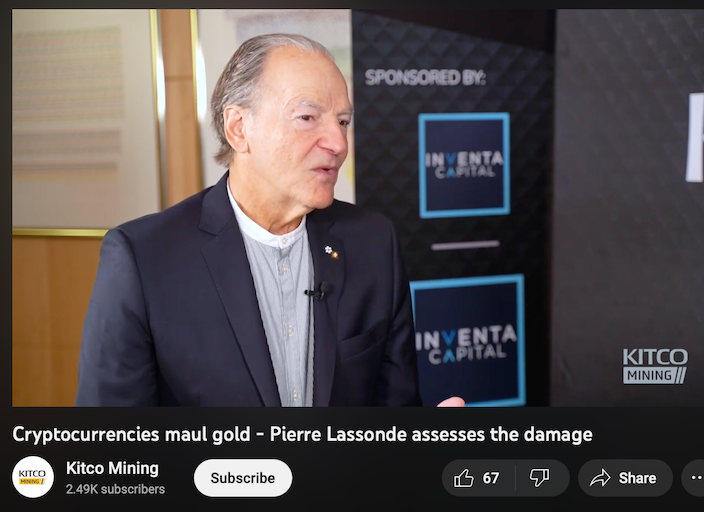 Cryptocurrencies maul gold - Pierre Lassonde assesses the damage
https://www.youtube.com/watch?v=4AbhSN9_Py4
The legendary Pierre Lassonde addresses a question I have pondered for some time - what was the impact of cryptocurrencies on the gold market?
Not familiar with Lassonde? If you invest in mining, it's a name you need to know. Check out my Commonstock post below:
https://commonstock.com/post/83376a3a-6b9a-41cf-a3cd-facbf014dbfa
Gold should be running higher during this period of inflation, but the metal was held back by the rise of cryptocurrencies, said Pierre Lassonde, chair emeritus of Franco Nevada, a behemoth in the royalty and streaming space with a current market cap of over $34 billion.
Lassonde spoke to Kitco on Tuesday at the 2022 Precious Metal Summit Zurich.
"I think a lot of gold bugs are asking themselves the question: 'with inflation running at 7% to 8%, why hasn't gold responded?'" said Lassonde.
"The answer is that 80% of the value of gold, long-run, is tied to the U.S. dollar, and for the last four years the dollar has been on a tear, and it's essentially suppressed gold demand. The other reason is cryptocurrency. Cryptocurrency went from nothing to a $4 trillion industry in the space of less than 10 years. The entire Gen Z generation got attracted to it."
Lassonde said that 2023 should be a good year for gold. With cryptocurrency in the doldrums and the U.S. dollar weakening, gold should get a lift. He estimates that 20% to 40% of gold liquidity was affected by the rise of cryptocurrency.
"With crypto imploding and the dollar rolling over, I predict that 2023 will be the year of gold."
Valuations have been tough for miners, but Lassonde said that investors should embrace downturns. Lassonde said his former business partner, Seymour Schulich, said to embrace misery, as it's the best time for bargain hunting.
"This is where we are today. The juniors are so unloved, it's not funny. They are trading for a fraction of their value, and they cannot raise any money," said Lassonde.
One bright spot is that many of the large miners are flush with cash after the recent run-up in metal prices. Lassonde also said that $1,700 is still a good price for gold. 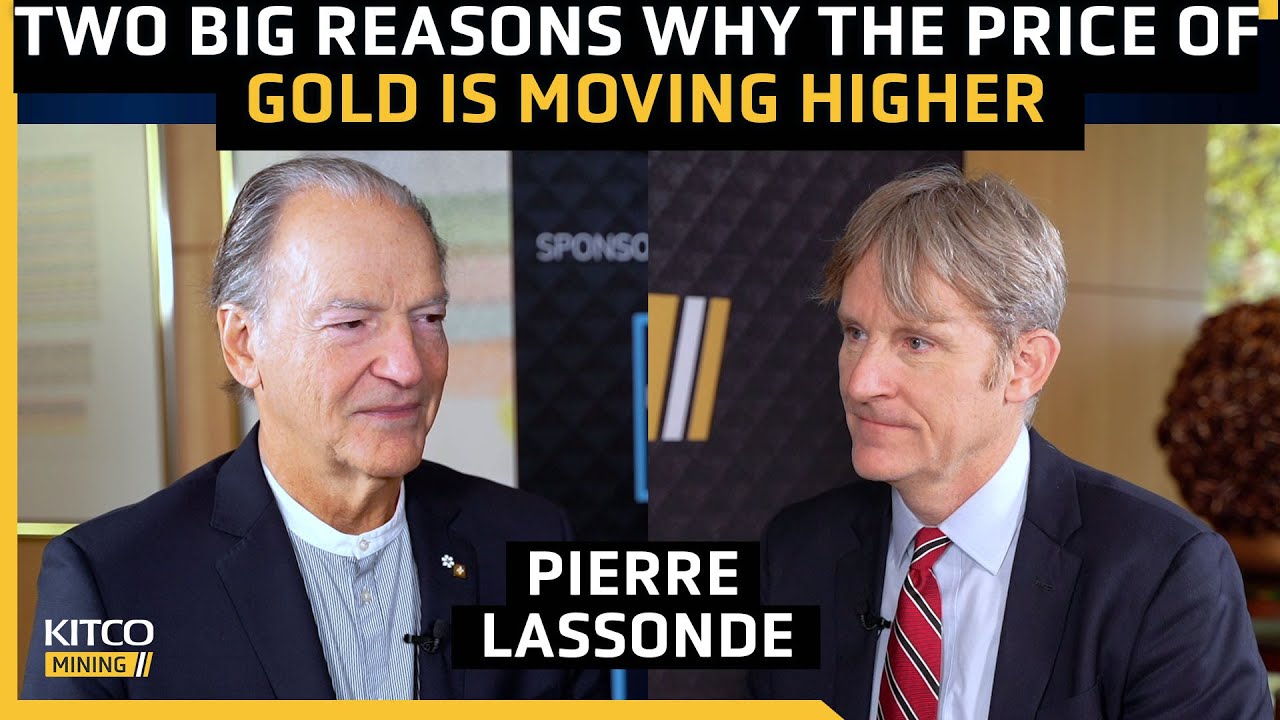 YouTube
Cryptocurrencies maul gold - Pierre Lassonde assesses the damage
Gold should be running higher during this period of inflation, but the metal was held back by the rise of cryptocurrencies, said Pierre Lassonde, chair emeri...
No comments yetBe the first to add your insight!