Sidni Standard@sidnistandardJuly 28
$29.3m follower assets
We're in a Recession
One of the worst things you can ever do is lie to yourself about where you are right now. It’s one thing to be delusionally hopeful and put the work in towards what you want to create, and it’s another thing to lie and say you are doing one thing when you are clearly NOT doing that thing. Right now, the US Government (and some economists) are gaslighting us all by saying that we’re “not in a recession” when the definition suggests something entirely different based on the recent GDP numbers. "The U.S. economy shrank at an annual rate of 0.9% in the second quarter despite average expectations calling for a 0.3% increase..."
According to Investopedia:
A recession is a significant, widespread, and prolonged downturn in economic activity. Because recessions often last six months or more, one popular rule of thumb is that two consecutive quarters of decline in a country's Gross Domestic Product (GDP) constitute a recession.
The recent GDP numbers suggest EXACTLY that, and yet we are being told the opposite by those in power. I don’t want to make this about politics so I’m going to refrain from blaming either party, but what’s clear is that whatever is being done, is not working.
“The U.S. economy unexpectedly shrank for a second quarter in a row this year, according to data released Wednesday, signaling the start of a technical recession even as economists predict signs of a slowdown will only grow in the coming quarters, likely prompting the government to officially declare the economy has entered a recession.” (source)
"We do not think the economy is in recession at present, but if our forecast is correct, this is not so much of a head fake as it is a harbinger of worse to come," says [Tim] Quinlan [Wells Fargo Senior Economist], who argues the negative GDP growth in the first half of the year isn't likely a function of weak underlying demand but instead due to “one-off” volatile factors such as net exports and inventories. “We expect the loud wailing of an actual recession to begin early next year,” he adds. (source)
I love to think positive as much as the next person, but there comes a point where that positivity can become toxic. I think one of the major issues that the US economy is having right now—outside of rising inflation—is that productivity hasn’t really increased, even with the flush of cash that was pumped into the economy through the stimulus package(s). Unless new industries are created that make our economy much more productive, it’s unlikely that we’ll see a complete turnaround for a while. To have a rise in net exports means that we have to be producing products that people want, and we just have not been doing that as of late; countries like China are really winning when it comes to industries like manufacturing due to lower prices. Empires rise and fall, and it’s quite possible that the bull run of America is on the decline, with regimes like the CCP getting passed the baton as a result of American hubris, bad decision-making, and a lack of highly-skilled labor to keep up with the growing tech industry.
Productivity in an economy is extremely important because it greatly impacts the standard of living of a populace. Raising it allows people to get what they want faster or get more in the same amount of time. Supply rises with productivity, which decreases real prices and increases real wages.
One of the major issues to increased productivity in the US is underskilled workers who aren’t prepared to take on the jobs/careers of the future. An increase in physical productivity causes a corresponding increase in the value of labor, which raises wages. That is why employers look for education and on-the-job training. Knowledge and experience increase the human capital of the workers and make them more productive.
Massive change needs to occur in order for the US to keep its #1 spot, and that starts first & foremost with education. It’ll be interesting to see how the American populace responds to the reality that America is in a recession, and hopefully, it has a positive effect rather than a negative one. In order to change any situation, you must first be willing to admit that you are in that situation in the first place, take full responsibility for it, and then start from where you are to make it better.
So yes, we are in a recession, but that doesn’t mean that life is over. Looking at it in a positive light, there is so much opportunity for growth, upskilling, and trying new approaches as a means to overcome it. In the meantime though, you can always purchase a lottery ticket… 😂😭 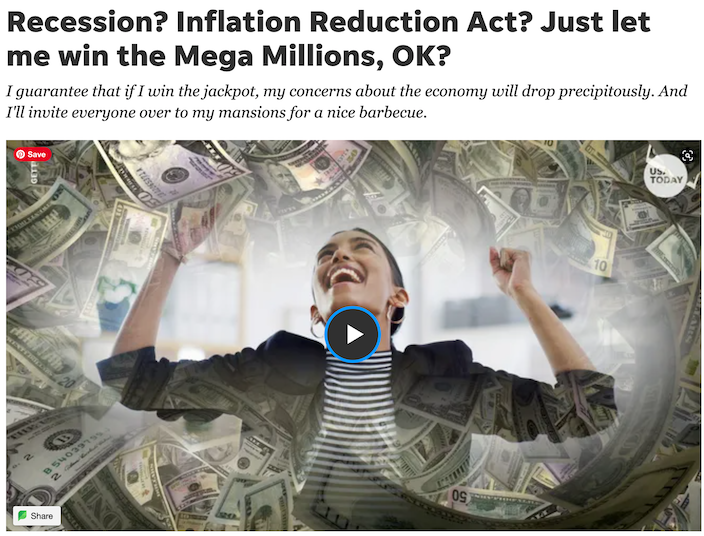 Rihard Jarc@rihardjarcJuly 28
well put. Throwing smoke is not the answer, I don't understand why everything has to be hidden under a cloak and not sound bad for the average person. The world is not full of roses all the time...