Conor Mac@investmenttalkMay 10
$316.8m follower assets
Starbucks Domestic and the Search for Greater ROI
All things considered, Starbucks' North American segment is doing relatively well. Churning out $5.45B in revenues (+17%) during the quarter, the region was supported by a 12% growth in comparable sales, a 5% increase in transactions, and a 7% increase in average ticket. Starbucks has enacted several price events over the last year to offset inflationary pressure with “negligible customer attrition”. This fact is similarly exemplified through the fact that both average ticket and transaction volumes hold strong. Even so, price events were not enough to outpace inflation, as demonstrated by the segment’s struggling EBIT margins. $SBUX

Sitting at 17.1%, down 220bps YoY, there was some lapping of government subsidies that should be taken into consideration, but supply chain costs, investment in labour, and enhanced store partner wages and training costs, are the primary culprits here. With the announcement of further wage increases (likely to combat the union propaganda), and the continuation of an inflationary environment, it might be some time before things crawl back to equilibrium.
I chose the title for this memo because Starbucks is seemingly at risk of an impasse after its 50-year history, which Schultz plans to navigate by transforming the business once again. Cold beverages, for instance, is a product category that equates to anywhere between 70% and 80% of total beverage sales in a given quarter. Yet, despite the insatiable demand, Starbucks stores are not optimised for cold beverage output. Naturally, Schultz plans to reinvest in this area, expanding cold beverage station capacity in stores. That’s just one example, but the reality is that Starbucks was once a “third place” for consumers to physically park their posterior and chill for an hour or two and it’s still built for that reality.
Today, increasingly complex cold beverage orders are a larger part of that equation. Mobile Order & Pay, a $4B business in its own right which has grown 4x over the last 5-years, drove over 70% of store volumes in the States alongside an increasing demand for drive-thru. Delivery, another $500M business, is one which has grown 30% YoY as consumers continue to favour Starbucks from their homes or office. Even the way customers engage with Starbucks has changed. With 26.7M active Rewards members in the United States (120M total members), an approximate $11B or so is spent at Starbucks stores each year, from pre-loaded cards. 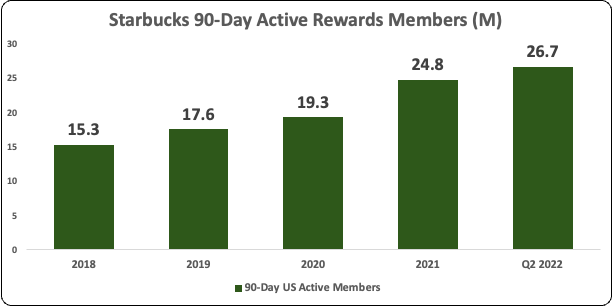 It comes as no surprise that Starbucks needs to get with the times. Schultz appears to be ready to do just that:
“Given record demand and changes in customer behaviour we are accelerating our store growth plans, primarily adding high-returning drive-thrus, and accelerating renovation programs so we can better meet demand and serve our customers where they are.”
He later remarked that ~90% of all new store openings would be high-returning drive-throughs. So, a multi-year investment cycle which understandably has to take place, but one that is going to cost a pretty penny. This was no doubt on Schultz’s mind during his first action as CEO, to shut down the share repurchase program and preserve liquidity. I had imagined, at the time of the announcement, that this was mostly related to the balance sheet, as Starbucks’ leaves a lot to be desired.
This was echoed in the call, but supplemented with a narrative that ROI is stronger when reinvested into US stores, which are cited to exhibit a ~55% ROI compared to annualised buybacks that sit at a ~10% ROI each year. Put simply, “investments in our stores - have an outsized return relative to what we could do with buybacks”. As a shareholder, with a time horizon of longer than 2 weeks, I don’t hate this. Sure, EPS will suffer from no share repurchases, but dividends and heavy buybacks are oft signs that the company feels it has no other attractive avenues for reinvestment. To bemoan the assertion that management now feels it has a better way to use that capital is nonsensical.
NFTs
Speaking of nonsensical, I sighed as I listened to Schultz, a 68-year old man, enthuse about NFTs and Web3. More specifically, talks of a “big breakthrough idea” related to the launch of a “unique platform for NFTs” from Adam Brotman, the architect of the Starbucks digital app. If his app design is anything to go by, I am not optimistic about what he does with NFTs. Having long expressed a desire for Starbucks to gamify its app and rewards program, this is not what I had intended. Talks of creating a “digital third place” with the ability to create incremental revenue unto itself as a separate business, feel very 2021 to me.
However, I must admit, that I am eager to see what they will do to rejuvenate the rewards program, whilst remaining sceptical about the means through which they plan to do so.

Jensen Butler@jensen6d
What a write-up. I just started building my $SBUX position in the last week after having it high on my watchlist the last two years. Will take a while to scale in as I just recently started slowly deploying during these conditions.
Have you ever been to a Starbucks Reserve storefront? I’ve been to the one on Michigan Ave in Chicago. Would be interested in seeing those financials in particular, and as a part of their overall bottom line (however marginal).

Conor Mac@investmenttalk6d
Author
@jensen Thanks Jensen, more to come tomorrow.
Regarding reserve, they are mostly a branding thing imo, not a real driver of growth, but would be interesting to see numbers for those stores.

Edmund Simms@valuablMay 10
Another titillating piece, Conor. A couple of questions:

Conor Mac@investmenttalkMay 10
Author
@valuabl Thanks Edmund, working on something longer, this is the intro.