The Science of Hitting@tsoh_investingSeptember 22
$33.8m follower assets
Starbucks: Reinvention Roadmap
This is an extended preview of today's write-up, exclusively for Commonstock readers. To read the remainder of the post, please subscribe to the TSOH Investment Research service.
https://thescienceofhitting.com/p/starbucks-reinvention-roadmap
“Our partners are co-creating the future with Starbucks. This is not a project in some ivory tower, it's a bottoms-up approach. It's a democratization of innovation at a company that has unique scale, engaging the people who have a unique window into America and who are most proximate to the challenges and the opportunities that the marketplace provides us…”
In the June 2022 Starbucks deep dive, I wrote the following:
“With the benefit of hindsight, Starbucks had significant operational issues arise over the past two to three years due to changes in customer behavior, which were exacerbated by the pandemic. The fact that Schultz needed to return, yet again, is indicative of the challenges Starbucks faces (and potentially speaks to the severity of the situation)… It also speaks to the need for best-in-class management that can provide stores with the proper support / incentives while also balancing the need to deliver long-term results for owners.”
At the beginning of September, we received our first indication of what the plan looks like for life beyond Schultz (hopefully for the last time): Laxman Narasimhan, Reckitt Benckiser’s leader for the past three years, was named the coffee chain’s next CEO. The specifics of the C-suite transition are a bit unique: for a six-month period beginning in October, Narasimhan will shadow Schultz, before taking the official CEO title in April 2023. As noted in the press release, this is an opportunity for Narasimhan to “be fully immersed in the company” and to gain “in-depth exposure to the brand, company culture, and Reinvention plan”. Given the cultural issues discussed in the deep dive, I think that this is a reasonable compromise; as opposed to coming in as an outsider and putting his feet to the fire, Narasimhan now has an opportunity to learn firsthand alongside Schultz. (That said, the fact that Starbucks / Schultz felt that an outside hire was a necessity is worth thinking about.)
In addition to the changes in the C-suite, Starbucks hosted an Investor Day event on September 13th to outline its vision for the future. Today’s update will focus on a few key announcements from the Investor Day event, along with some updated thoughts on the investment thesis and the valuation.
Reinvention: “Convenience and Connection”
Before we talk about the future, let’s start with a short history of the recent past: COVID pressured Starbucks’ business in interesting ways, most notably by accelerating the importance of drive-thru, mobile order & pay (MOP), and delivery options, which collectively accounted for roughly 70% of the business in YTD FY22 (with drive-thru’s alone at 47% of its U.S. company-owned mix, up from one-third in 2018). Over the past 18 months, the company’s primary issue in the U.S. hasn’t been revenue generation; it has been effectively serving customer needs while maintaining reasonable expectations of its employees (baristas). In short, ensuring effortless convenience for customers led to significant strain for baristas. As one Starbucks executive put it, “We haven’t lived up to our end of the bargain with our partners.” 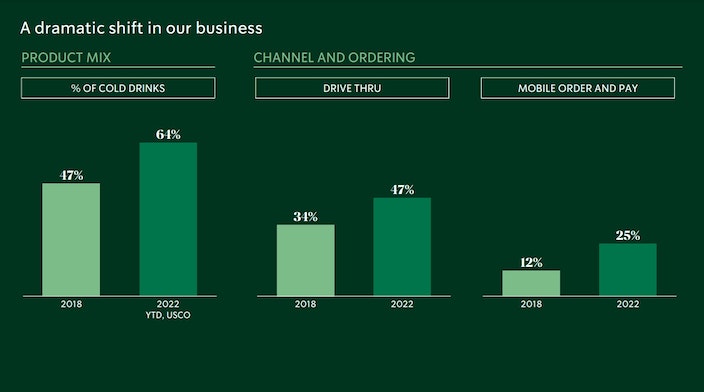 Management now recognizes the severity of the problem and is looking to improve employee relations through a number of initiatives: more thorough training, equipment and technology investments to make barista’s lives easier, improved total comp (wages and benefits), flexible scheduling, and long-term opportunities to grow / build a career within the company. (“Our job is to automate the work and simplify it so that [the barista’s] job is easier.”)
Each of these initiatives will come with significant incremental costs for Starbucks. That said, if I owned the business, I would be fully supportive of these decisions. In my mind, they are critical components of what makes Starbucks unique; it covers some key inputs that have driven the attractive long-term financial outputs that the company has delivered for decades.
As Schultz often says, Starbucks offers “affordable luxury”. While affordability is relevant, Starbucks has also demonstrated a clear ability to take pricing when they deliver against customer’s expectations (depending on the type of transaction, that ranges between convenience and connection / “third place”). These investments are focused on ensuring that Starbucks continues to live up to its end of the bargain with customers; when they do, I think they can pull the necessary levers to ensure that attractive unit economics remain.
China: “Playing The Long Game”
The difficulties that Starbucks has faced in China as of late were perfectly captured by Belinda Wong, the company’s leader in the region:
“In Q3, China faced its most severe COVID disruption since the onset of the pandemic. Mobility restrictions and lockdowns were implemented faster and eased more slowly under China's ‘Zero COVID’ policy. Shanghai, our largest market with more than 940 stores, was completely locked down for two-third of the quarter. In Beijing, 150 stores or one-third of our stores in the market, were closed for almost six weeks, with the balance of our Beijing stores operating without indoor dining. We entered Q3 with over 1,300 stores, or close to 25% of our total portfolio, temporarily closed. We exited the quarter with roughly 2,000 stores across nearly 50 cities operating with mandated reductions in seating capacity or other COVID restrictions…”
As shown below, store closures and other market disruptions culminated in -44% comps for Starbucks China in Q3 FY22. On top of those (hopefully) short-term COVID pressures, there’s also heightened concerns about geopolitical risks for U.S. companies operating in China. (Former Disney CEO Bob Iger in January 2022: “The tension between the United States and China has not made it any easier to do business there. I think my optimism about certain markets, which was extraordinary at one point, has been diminished a bit.”) In the face of those risks, the Investor Day made it clear that management remains fully committed to further long-term investment in the region. (Schultz: “We've been in China now for 21 years. We lost money in China, I think, for the first nine years. It took us a while to get it right. And in the last decade, I think we've proven that the power of the Starbucks brand and the experience in literally creating an industry that did not exist and a category that did not exist… We’re playing the long game.”) 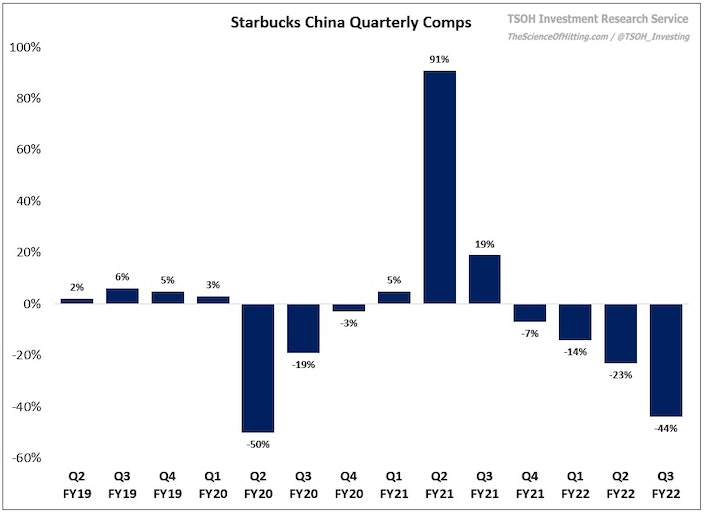 (End of Preview)
https://thescienceofhitting.com/p/starbucks-reinvention-roadmap
Starbucks: Reinvention Roadmap
“Our partners are co-creating the future with Starbucks. This is not a project in some ivory tower, it's a bottoms-up approach. It's a democratization of innovation at a company that has unique scale...
thescienceofhitting.com

Jensen Butler@jensenSeptember 22
Thank you! Long $SBUX cheers 🍻 (<- however those are Pumpkin Spice Lattes)