Paul Cerro@paulcerro5d
$37.8m follower assets
Why Walmart has a case of the (Cyber) Mondays
The strategy: Walmart’s latest Office Space-inspired ad campaign "Case of the Mondays" is a clear shot across the bow at Amazon and part of a bigger strategy to compete with the ecommerce giant head-on.
The ad campaign highlights Walmart’s “Black Friday Deals for Days” promotions, which feature new deals available online every Monday through November.
The campaign seems designed to address the recent decline of Thanksgiving weekend as both online and offline shopping activity has plummeted on Thanksgiving and Black Friday—historically Walmart’s sweet spot for the holiday season, per NRF. 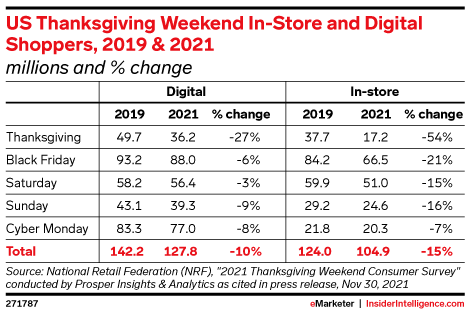 This ad campaign not only aims to stanch the bleeding but reveals an apparent competitive front against Amazon by (1) going after Amazon’s dominance of online shopping holidays, (2) cultivating a stronger third-party marketplace, and (3) competing more directly with Amazon Prime.
Taking on Amazon: Walmart has traditionally owned the big offline shopping days during the holiday season, Thanksgiving weekend, and other weekends. As shoppers return to work on Mondays, they shifted their holiday shopping online—often on sites other than Walmart.
Walmart’s “Case of the Mondays” campaign aims to keep weekend in-store customers shopping with Walmart when the weekend ends. Any progress Walmart makes in capturing more ecommerce market share will likely come at Amazon’s expense.
Cultivating a stronger third-party marketplace: Walmart is quietly but aggressively building out its third-party marketplace. It recently rolled out a suite of new self-service tools to make onboarding and launching campaigns easier for third-party sellers. It’s also rolling out the red carpet to digitally native D2C brands—most of which have resisted selling through Amazon—with the promise of promoting high-performing brands on the marketplace onto Walmart store shelves.
Walmart is using its competitive advantage (physical stores) to attack where Amazon is weak on product selection (D2C brands). This helps Walmart improve selection, which attracts more shoppers, and creates the proverbial flywheel effect for which Amazon is so well-known.
That strong marketplace model is the foundation of a powerhouse retail media network. It’s not a coincidence that Amazon monetizes at much higher rates than its nearest competing RMNs. 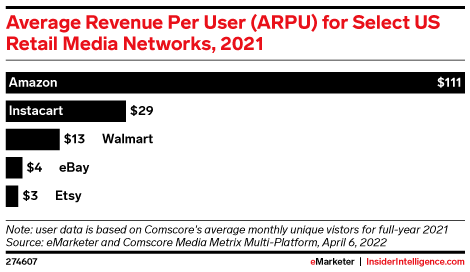 Strong marketplaces provide the traffic scale and quality desired by brands, and the ad auction density to drive price efficiency—which in turn encourages more investment from brands. Amazon’s monetization may not be realistic in the near term, but if Walmart could even close the gap with Instacart on average revenues per user, it would add a couple billion dollars in ad revenues.
Competing with Amazon Prime: The Walmart+ paid membership program has been gaining steady traction since its 2021 inception, with 16% of shoppers indicating they are members, according to our latest Bizrate Insights survey.
To encourage even more adoption, Walmart offered an annual membership for 50% off during a recent two-day promotion.
In the short term, Walmart is sacrificing a lot of margin to encourage more membership, and it likely has to do with its fast-growing retail media business, Walmart Connect. Improving its loyalty program and digitizing more transactions are critical to building out its first-party data strategy, the fuel for Walmart Connect.
With a huge portion of its brick-and-mortar transactions happening with non-traceable tender (aka “cash”), Walmart is currently at a relative first-party data disadvantage to its nearest competitors Amazon and Kroger, both of which have almost all transactions via traceable tender.
The big takeaway: Walmart’s flywheel strategy is now coming into sharper focus, and it’s not shying away from competition with Amazon in the process. The bigger a foothold it grabs in ecommerce, the faster that flywheel will accelerate. That’s why Walmart is leaning into ecommerce this holiday season with a major case of the Mondays.

Jensen Butler@jensen5d
$WMT a monster. Hard to not want to own

Nathan Worden@nathanworden5d
The question: Can Walmart become Amazon faster than Amazon can become Walmart?
Amazon's traceable data advantage is a big one. But Walmart's geography / real estate footprint is another 🤓

Joshua Simka@tomato4d
I hadn't thought of the disadvantage of such a large portion of transactions taking place in cash. On another note, is Walmart+ any good? I see free membership in that is a benefit of the AmEx Platinum. I wonder how many AmEx Platinum cardholders are regular Walmart shoppers?

Paul Cerro@paulcerro3d
Author
@tomato you'd be surprised. I have the chase Sapphire reserve and I actively use my benefits just because of that