Steve Matt@interrobangbrosMay 10
$1m follower assets
$UPST Earnings vs. What I Was Looking For
Spoiler alert: I think it was a good-but-not-great-but-not-awful quarter!
My updates below are in italics.
Here's what I'm looking for:

Revenue of $310MM. Beat their own guidance but came up well short of what I was hoping for. Management also issued guidance for next quarter that was identical to Q1 guidance. This is the first time their QoQ guidance wasn't significantly higher. Near-term headwinds indeed.

Their pristine balance sheet took a hit here. Borrowings increased almost 11% and loans on their books more than doubled. Thats a big surge in loan exposure.

Conversion rate and contribution margin both declined YoY (22% to 21.4% and 48% to 47%, respectively). Percent of loans fully automated, however, increase from 71% to 74%. I'm most bullish on that last number. It shows their AI is working. 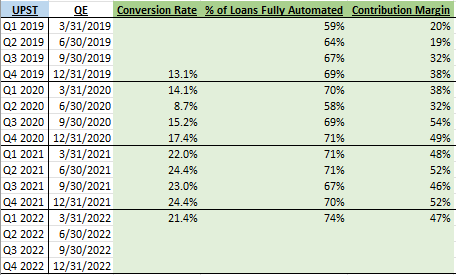 I remain bullish but I'll be watching their balance sheet closely going forward as well as the KPIs in the screenshots above and concentration risk. I did increase my total cost basis by ~11% this morning.
Here's my original post:
https://commonstock.com/post/c52fb343-5779-4740-a7c5-d32d23a2f669