Dividend Dollars@dividenddollarsNovember 19
$25.5m follower assets
Stock Market Week in Review (11/18/22) – Fed Talks and Retail News
This is just half of the market recap that I write every weekend! I share here the unbiased news and events from the week. You can read the full article here which contains an opinion piece by me on my direction of the market! Enjoy!
"The market had a slight pullback this week following the recent big run. Trading reflected some consolidation efforts and growth concerns in a slowing economic environment.
The Fed has been in the middle of those growth concerns. Fed officials have reiterated that they are not done yet raising rates. Comments from St. Louis Fed President Bullard were the most impactful for market participants this week. He acknowledged that the fed funds rate is not yet at a sufficiently restrictive level and then showed in a Taylor Rule exercise that it may need to go to 5-7% in the battle to get inflation under control. 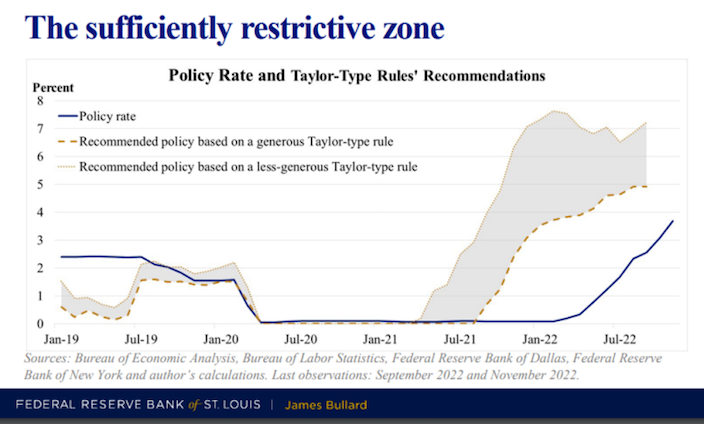 Other remarks from Fed (FOMC voters) officials included:
Fed Governor Christopher Waller said “we’ve still got a ways to go” before stopping interest rate hikes. Later in the week he said, that he’s more comfortable stepping down to a 50-basis point hike at the December FOMC meeting following the economic data releases from the last few weeks.
Fed Vice Chair Brainard said it may ‘soon’ be appropriate to slow the pace of rate hikes.
Kansas City Fed President George for her part said a real slowing in labor markets and a contraction in the economy may be needed to reduce inflation.
Boston Fed President Collins said in a CNBC interview that a 75 basis point rate hike is still on the table.
The continued inversion in the yield curve this week shows worries about the Fed over tightening. The 2-yr Treasury note yield rose 19 basis points this week to 4.50% while the 10-yr note yield fell one basis points to 3.82%.
We received some data this week that played into the concerns of a deteriorating economic outlook. The October Producer Price Index showed some welcome disinflation at the producer level with total PPI up 8.0% yr/yr, versus 8.4% in September, and core PPI, which excludes food and energy, up 6.7% yr/yr, versus 7.1% in September.
There was also the Retail Sales Report for October which showed a 1.3% increase after a flat reading from last month. Despite the stronger-than-expected retail sales data, there is are worries that discretionary spending activity may slow in coming months as more spenders feel the pinch of rising interest rates, stubbornly high inflation, a reduced wealth effect, and increased layoff announcements and concerns about job security.
Retailers Target ($TGT) and Walmart ($WMT) acknowledged that consumers were pulling back on discretionary purchases after reporting earnings this week. Walmart reported good results for its fiscal third quarter, but CEO John David Rainey noted that consumers were 'making frequent trade-offs and biasing spending toward everyday essentials.'
In general, there was a positive response to earnings reports from retailers this week. Lowe’s ($LOW), Macy’s ($M), Bath & Body Works ($BBWI), Ross Stores ($ROST), Foot Locker ($FL), Gap ($GPS), and Dow component Home Depot ($HD) all traded up after reporting their respective quarterly results.
For the tech sector, Cisco ($CSCO), Applied Materials ($AMAT), and Palo Alto Networks ($PANW) also enjoyed some gains after their earnings reports.
On the flipside, William-Sonoma ($WSM) and Advance Auto ($AAP) both fell after disappointing with their earnings reports.
An added point of concern that market participants dealt with this week is that earnings estimates for 2023 are too high and will be subject to downward revisions. Investors took some money off the table this week and are mindful about how much they are willing to pay for every dollar of earnings.
To be fair, some contrarian buying interest was stoked by BofA Global Fund Manager Survey early in the week that showed an elevated cash position of 6.2%.
There was a knee-jerk response to a halting report earlier this week that a Russian bomb had killed two people in NATO state Poland. This development raised the market’s anxiety level about the geopolitical situation and potential for a wider conflict in Russia’s war with Ukraine. However, follow-up intelligence reports suggested the missiles were not fired by Russia and there wasn’t any deliberate action here. That finding helped mitigate the angst surrounding the initial report.
Also, the cryptocurrency market continues to be in focus as more news emerges about the FTX meltdown.
Only three S&P 500 sectors squeezed out a gain this week, utilities (+0.8%), health care (+1.0%), and consumer staples (+1.7%). On the flip side, energy (-2.4%) and consumer discretionary (-3.2%) were the biggest losers."
Full article here contains my thoughts on the data and market direction. Thanks for reading!

Stock Market Week in Review (11/18/22) – Fed Talks and Retail News | Dividend Dollars
Weekly market recap contains information on Fed speeches, retail earnings and data releases, the brief NATO shock in Poland, plus the author's opinion piece on the direction of the market.
Dividend Dollars
No comments yetBe the first to add your insight!