Uday@upluskNovember 18
$95.3m follower assets
Luxury's impressive resilience
Luxury has been one of those few brighter spots in a dull economic environment this year. A research report from Bain & Co predicts the market to be worth over $350bn in 2023, growing 3-8%. 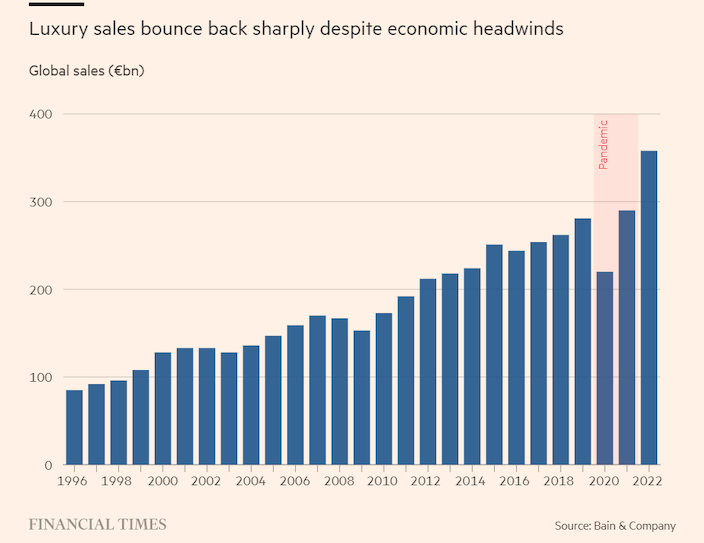 The pandemic was an unexpected tailwind that accelerated sales across leading brands as the consumer had more savings to splurge on. Luxury products, that are predominately sought after by wealthier customers, did even better as the savings rates among the richest spiked even higher due to lower spending on other categories.
The market is expected to grow ~60% on a cumulative basis till 2030. China has been one of the largest drivers over the last decade given the increasing wealth across social classes in the country, and their propensity to spend on western brands and products. With the eventual full reopening of the country, one could expect higher growth rates in the near term as the Chinese start traveling again.
I was quite fascinated to read that the top 2% of spenders account for 40% of global luxury sales. One of those rare cases where concentration protects you from economic downturns, as the wealthiest tend to get hit the lowest during these times. Luxury's resilience is quite impressive, indeed.
I intend to share more on the market and the luxury business as I learn more about $LVMHF (LVMH) and its comps $PPRUY (Kering) and $HESAY (Hermes).
No comments yetBe the first to add your insight!