Paul Cerro@paulcerro5d
$37.7m follower assets
A timeline of how consumers have adjusted to inflation in 5 charts
For almost two years, consumers and businesses have battled the effects of inflation. Let’s rewind to see how we got here … and take a peek at what’s ahead.
March: Inflation rears its head 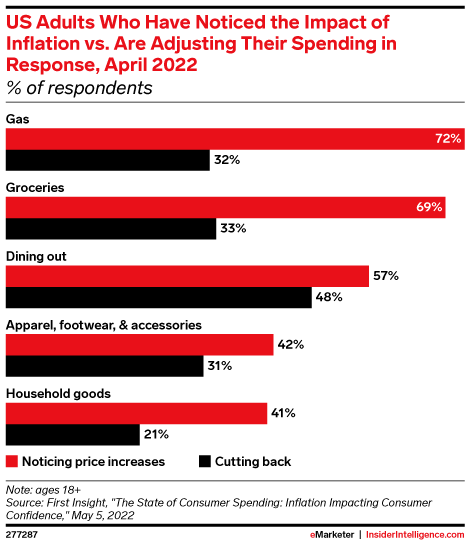 Though inflation had been steadily creeping up throughout 2021, it reached a boiling point in March 2022, when the consumer price index hit a 40-year high. Prices would climb again later in the year.
At this point, many consumers began noticing price increases at the store, at the gas pump, and at the dinner table. But in most categories, only about a third (or less) adjusted their spending in response. Still, concerns about the economy began to surface, with over half (57%) of consumers reporting they were worried about whether they would lose their job or income security due to inflation.
May: Starting to feel the burn 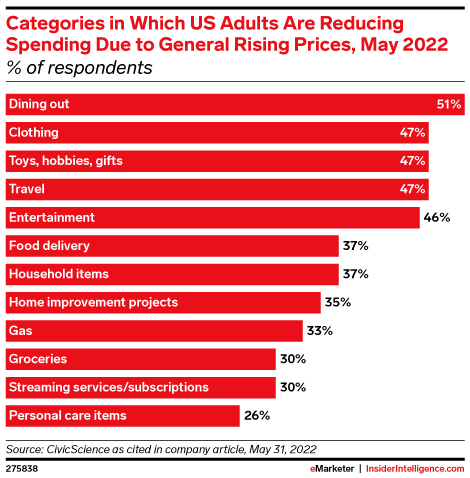 By May, consumers began cutting back on discretionary categories like dining out and clothing. But less than a third said they cut back on gas, groceries, or personal care items.
Interestingly, consumers were hesitant to cut down on streaming services/subscriptions, despite the fact that other entertainment options were among the top five categories where spending was reduced.
July: Prime saves the day? 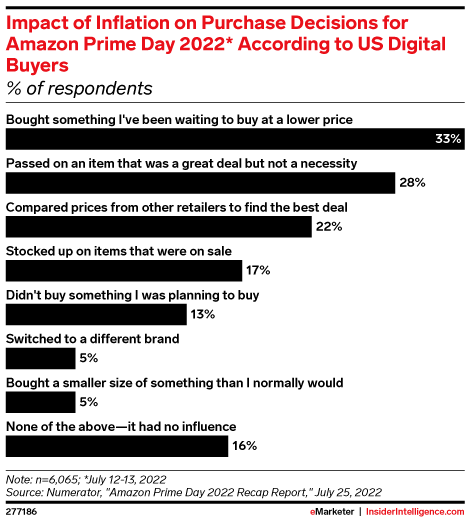 Though inflation had started to cool in July, consumers were still feeling the pressure. Some even started to curb spending on groceries and gas, despite the fact that they were ranked as high spending priorities.
In hopes of drawing shoppers in with deals and discounts, Amazon held its first Prime Day event in July. During the two-day event, which was its biggest yet, a third of consumers reported buying something they have been waiting to purchase at a lower price. Nearly as many (28%), though, passed on an item that was a great deal but not a necessity, another sign consumers buckled down on spending.
Sales from Amazon’s second Prime Day event in October were also dampened by rising prices; nearly 80% of shoppers said that inflation impacted their choices.
It wasn’t just consumers feeling the pinch. July was the worst month for ad spending since July 2020, declining 12.7% year over year. (Spoiler alert: It hasn’t gotten much better.)
August: Getting priorities straight 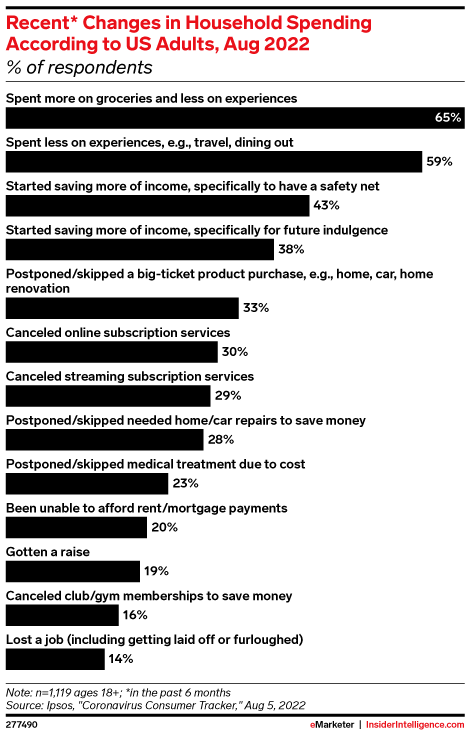 Rising prices of food, shelter, and medical services drove the consumer price index up again in August, though gas prices started to ease, giving consumers a little reprieve.
Predictably, a majority of consumers reported spending more on groceries and less on experiences. Additionally, 43% of consumers said they began saving more income in order to have a safety net, showing consumers were less than confident about their economic futures.
September: Value above all 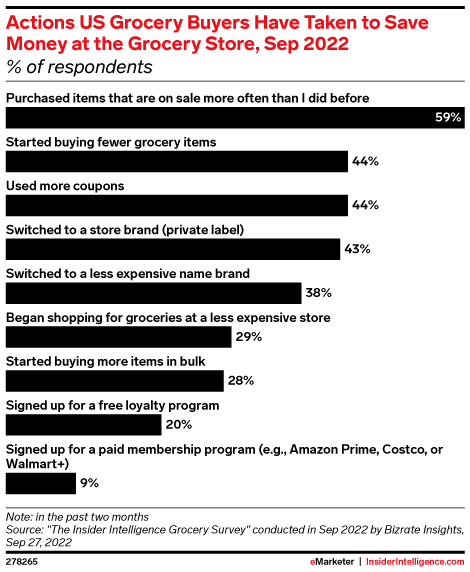 Though many retailers have suffered from the pullback in consumer spending, some have come out swinging, particularly in the grocery category.
Discount retailers like Dollar General and Dollar Tree have seen an influx of consumers who are looking to get more bang for their grocery buck. Walmart, too, reports that nearly 75% of its grocery share in the third quarter came from households making more than $100,000 annually.
October and beyond: Cautious optimism
While still high, inflation has begun to level out, but consumers are still holding tight onto their wallets as we enter the holiday season.
When asked how inflation will impact holiday shopping plans, a third of consumers said that it wouldn’t change anything, according to TransUnion. For those that are adjusting their spending, most plan to buy fewer gifts with less money, though more practical gifts and cheaper versions of gifts are also ways shoppers will keep costs down.
Recession fears persist among many financial analysts and consumers alike. Even if inflation eases, how long will it take for consumer spending to return to somewhat normal levels?

Buyingyourtime@buyingyourtime5d
Good post!
The consumer HAS to psychologically feel as though they're in a recession. I wrote briefly on this topic in my recent Substack.
Even those that are fairing well in the current environment will eventually succumb to the "feelings" of having to cut back spending if enough news, information, and chit-chat, regarding a recession enters their day-to-day life.