The Science of Hitting@tsoh_investingJune 21
$27m follower assets
Howard Schultz: "I'm Here Now"
This is an extended preview of today's update on global coffee giant Starbucks ($SBUX).
T**o read the complete analysis, please subscribe to the TSOH Investment Research service.**
https://thescienceofhitting.com/p/howard-schultz-im-here-now
In March 2017, a month before Howard Schultz prepared to step down as CEO of Starbucks (for the second time), the company held its annual meeting in Seattle, Washington; COO Kevin Johnson, who was set to replace Schultz, offered some prescient words to a reporter after the meeting: “Howard casts a big shadow”. Fast forward five years, and the coffee giant finds itself amidst a difficult period. In mid-March, Johnson announced his retirement; but despite the fact that he had told the board of his intentions a year earlier, they were apparently unable to find a suitable replacement (Rosalind Brewer, who was viewed internally as the most likely replacement, left in February 2021 to become the CEO of Walgreens Boots Alliance). As a result, the company announced that Schultz would return for his third stint as CEO.
According to board chairwoman Mellody Hobson, the “interim” title is a real one: “Is there any chance Howard would stay for good? Zero. It will be a short term assignment.” (In early June, Schultz reiterated those comments: “My plan is to leave the interim CEO title at the end of calendar Q1.”)
The Return of “Uncle Howard”
Upon his return, Schultz wrote the following:
“Our company, like many companies, is facing new realities in a changed world. Pinched supply chains, the decimation caused by COVID, heightened tensions and political unrest, a racial reckoning and a rising generation which seeks a new accountability for business… We can either choose to rise to this moment - or stand idle. I am returning to the company to work with all of you to design that next Starbucks — an evolution of our company deep with purpose, where we each have agency and where we work together to create a positive impact in the world.”
The clearest immediate change from Howard’s note was the decision to suspended the company’s share repurchase program (“This decision will allow us to invest more profit into our people and our stores — the only way to create long-term value for all stakeholders.”). As we think about that decision, note that Starbucks returned >100% of net income to shareholders, primarily through repurchases, during the final three years of Schultz’s prior stint as CEO. Said differently, it seems Schultz has had a change of heart, at least for now, on the role of share repurchases at Starbucks. 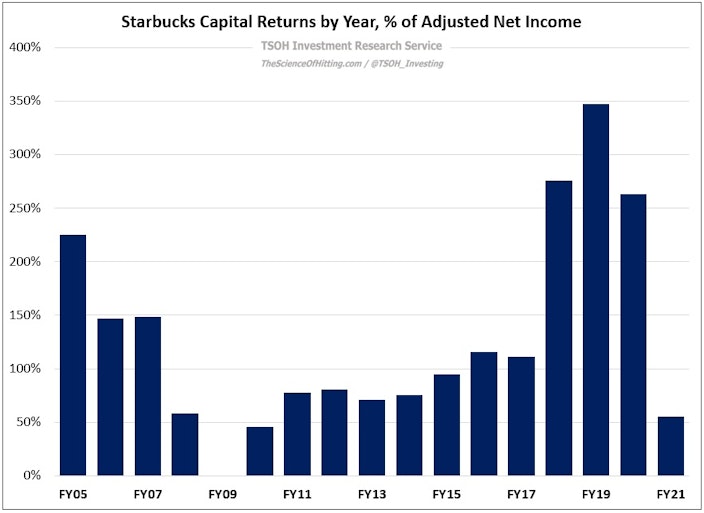 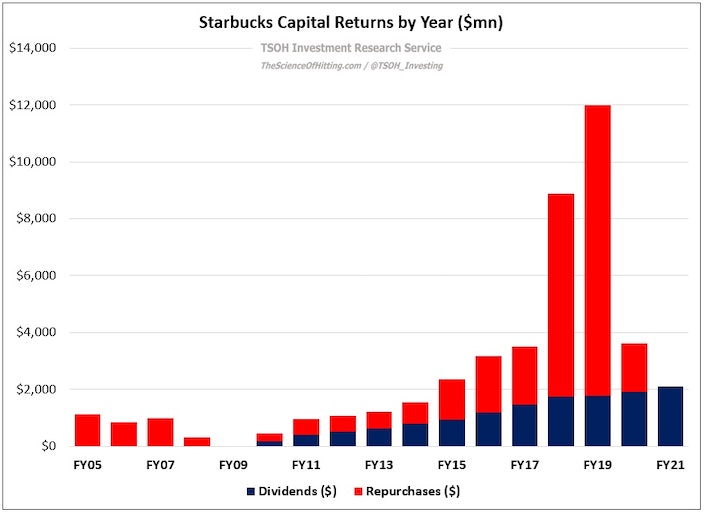 The most obvious reason for this shift is that Starbucks faces internal pressure from its employees. As noted in a recent WSJ profile, “Worker dissatisfaction has spawned a unionization push, with more than 200 of the company’s 9,000 U.S. locations filing to be represented by the Starbucks Workers United union.” (As of June 16th, workers in nearly 300 stores have filed to unionize; to date, 158 stores in 30 states have won union elections.)
In a town hall meeting, Schultz addressed the unionization efforts:
“We can't ignore what is happening in the country as it relates to companies being assaulted in many ways by the threat of unionization… I'm not anti-union; I am pro-Starbucks. Pro-partner, pro-Starbucks culture, pro-heritage, the history of our company... We didn't get here by having a union.”
There’s recent developments present an important question for us to consider: how did we get here? How did Starbucks, a company that built a decades-long reputation for best-in-class employee relations, end up in this position? Based on my research, I think there are two primary reasons.
First, there has been a structural change in the business towards increased complexity (which was exacerbated during the pandemic); as opposed to the days when most customers would walk into a Starbucks store and stand in-line to order a hot coffee, >70% of the business is now attributable to drive-thru’s, mobile orders, and delivery (“dramatic changes in customer behavior that Starbucks stores and systems were not designed or built for”). That development, in combination with customer demand for customization and a significantly higher mix of cold beverages (~80% of the business), has put increased pressure on employees (“Less like a lineup of drinks and more like a buffet of ingredients to be mixed together in unorthodox ways to create off-menu drinks that may list 10 separate customizations on the side of the cup”). From discussions I’ve had with people inside the company, along with reporting from outlets like the WSJ, it also sounds like this coincided with a heightened focus on KPI’s like throughput (time to complete a drive-thru order) under Johnson’s leadership. When viewed through the eyes of a barista, you can appreciate how these developments put “enormous pressure” on them over the past few years (as Schultz put it on the Q2 call).
Second, the compensation / benefits gap may have narrowed in recent years. Consider a company like Costco, which announced in October 2021 that it was increasing its minimum wage to $17 per hour – up more than 30% from the $13 per hour that it paid in early 2018. By comparison, Starbucks announced in late 2020 that it was increasing its minimum wage to $15 per hour “within the coming two to three years”. When completed in summer 2022, the company expects an average wage for all U.S. hourly employees of “nearly $17 per hour” – a level that puts Starbucks in the same ballpark as companies like Chipotle (~$15 per hour) and Target (“a new starting wage range from $15 to $24”). In my opinion, these examples speak to the perception among some partners that Starbucks has ceded some of its lead. (“We used to be the leader in pay and benefits, now almost every QSR has the same. What are we going to do again to become the leader?”) Notably, Schultz echoed that sentiment on the Q2 FY22 call: “We've always been ahead of the curve, but I think we haven't done enough.”
Financials
The past 20+ years at Starbucks can be summed up in one word: growth.
The company ended FY21 with nearly 34,000 locations around the world, a roughly 6x increase from the unit count at the end of FY02 (unit growth CAGR of ~10% p.a.). That said, the realities of a massive global footprint are starting to show in the company’s results, with the pace of year-over-year unit expansion in FY20 and FY21 falling into the low-single digits. 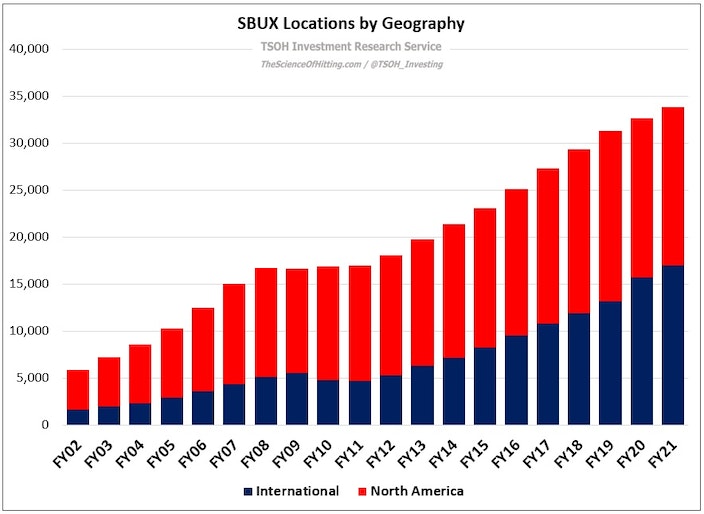 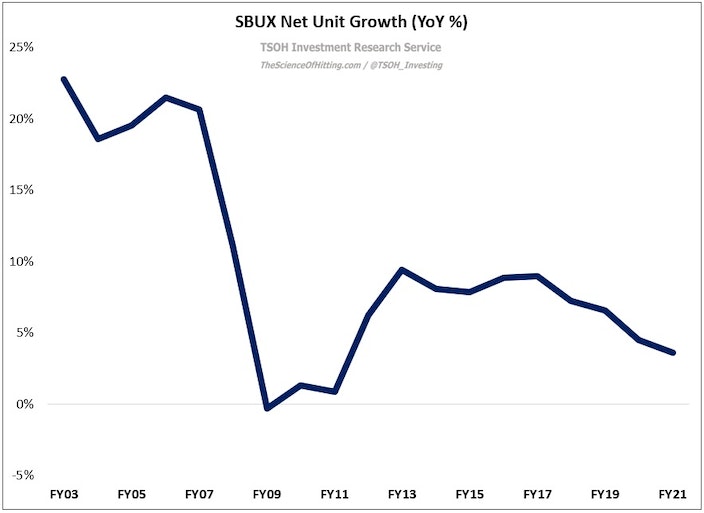 As shown above, unit growth has been driven by the expansion of the International footprint, with locations outside North America growing from ~1,600 at the end of FY02 to ~17,000 at the end of FY21. (To get here, the company has increasingly relied on outside partners / licensing: company owned locations dropped from ~67% of the mix in FY02 to ~50% in FY21.) 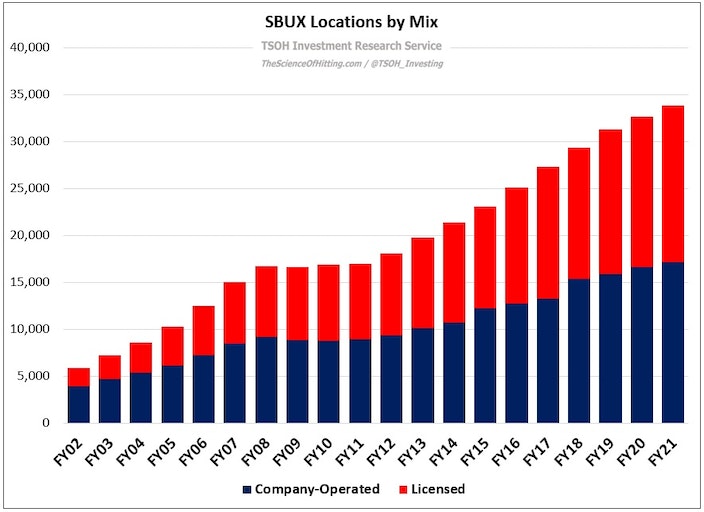 International unit growth has primarily been attributable to China: Starbucks, which entered this geography in 1999, ended Q2 FY22 with more than 5,600 stores throughout the country; it’s expansion in China has ran in parallel with the broader growth of the country’s coffee market (“People in the 1990’s and early 2000’s had heard of the word coffee, but they didn't actually know what it was because they hadn't grown up with it… Fast forward from that period of time to today, where there are now more coffee shops in Shanghai than Paris, London, or New York. The market has grown really, really fast and it continues to grow really, really fast.”) On the Q2 call, Schultz reiterated the company’s long held belief that China is a key market for Starbucks: “Our aspirations around China have never been greater and I remain convinced Starbucks’ business in China will be eventually larger than our business in the U.S.” Naturally, that outcome demands a prosperous long-term relationship between the U.S. and China (in addition to navigating COVID lockdowns in the near term, with China comps -23% in Q2); I’m far from an expert on that topic, but it’s safe to say that there are real questions about how that will evolve over the next 5 - 10 years. (Former Disney CEO Bob Iger: “The tension between the U.S. and China has not made it easier to do business there. And I think my optimism about certain markets, which was extraordinary at one point, has diminished quite a bit.”)
(End of Preview)
https://thescienceofhitting.com/p/howard-schultz-im-here-now
Schultz: "I'm Here Now"
In March 2017, a month before Howard Schultz prepared to step down as CEO of Starbucks (for the second time), the company held its annual meeting in Seattle, Washington; COO Kevin Johnson, who was se...
thescienceofhitting.com