The Science of Hitting@tsoh_investingNovember 21
$34.9m follower assets
Roblox: Growing Up
This is an extended preview of today's write-up, exclusively for Commonstock readers. To read the remainder of the post, please subscribe to the TSOH Investment Research service.
https://thescienceofhitting.com/p/roblox-growing-up
In “Bigger Than Play”, I wrote the following: “The important thing to note, in my opinion, is that Roblox is making these moves from a position of strength. Simply put, they’re investing aggressively in pursuit of what they believe is a massive long-term global opportunity: hundreds of millions of DAU’s spending multiple hours a day on the platform and collectively generating tens of billions of dollars in bookings. At a time when many of the traditional gaming companies are curtailing spend / investment in light of a difficult macro environment, Roblox is marching forward… That said, this still presents near term challenges, particularly for market participants / investors who are not following the story closely or who have become skittish as a result of significant volatility around some key numbers (TTM FCF margins have contracted ~1,500 basis points over the past year; at ~11%, FCF margins are well below the long-term target of 25%+).”
The Q3 results at Roblox, along with the commentary on the call, provided a clear indication that the current state of affairs will remain for the foreseeable future. As noted in the shareholder letter, management expects EBITDA margins to remain below 10% “at least through 2023”. A look at the company’s free cash flow is revealing: after reaching a record high of $558 million in 2021 (with 20%+ FCF margins for the year), FCF has been negative in each of the last two quarters (with TTM FCF of $57 million). 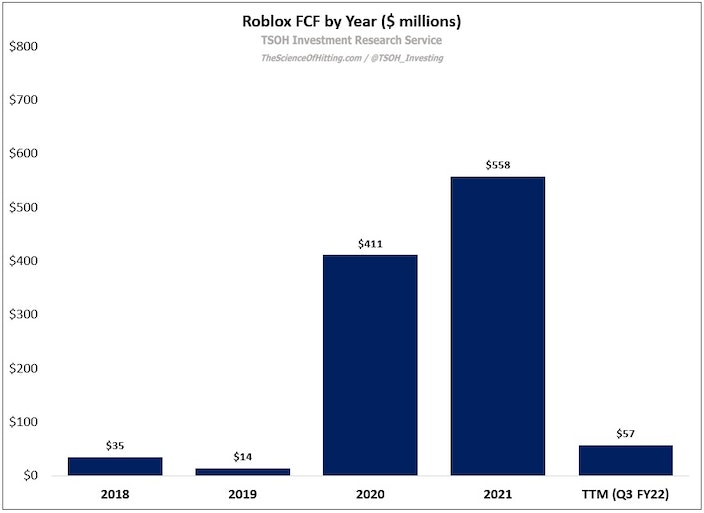 Based on this metric, or by looking at the ~75% decline for the stock over the past year, one might conclude that Roblox is yet another busted COVID story. My contention, as I’ll discuss in today’s write-up, is that this conclusion misses the mark. The real story is that Roblox’s business is evolving, most notably as it relates to older users (aging up). Management is making large investments in pursuit of an opportunity that has changed significantly from what existed a few years ago (or, at a minimum, their ability to compete in certain pockets has clearly improved). If they’re successful - with signs in the recent results that suggest they’ve made meaningful progress against that objective - I think Roblox’s business could end up being multiples of its current size by the end of this decade. (“Our investments compound at incredible rates when funneled through the creator community.”)

Users and Engagement
In Q3 FY22, Roblox reported 58.8 million daily active users (DAU’s), up ~24% versus the year ago period. As shown below, the significant DAU growth reported over the past few years has been attributable to meaningful gains in each geography. In addition, I’d call out the sequential growth in UCAN, the company’s most established market. While this region saw a meaningful uplift in the early days of the pandemic - from 7.8 million DAU’s in Q1 FY20 to 11.4 million DAU’s in Q2 FY20 - that proved to be a tough comp; over the next two years (Q2 FY20 - Q2 FY22), UCAN reported one million cumulative net adds. With the strong sequential gains reported in Q3 FY22 (+1.8 million DAU’s), there’s hope UCAN will break away, for good, from the COVID highs. 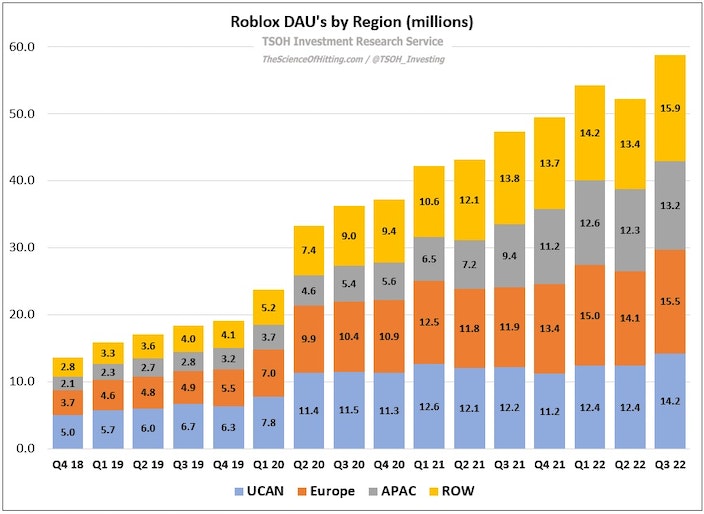 In addition to the broad based geographic growth, Roblox has seen continued success among its different age cohorts. In Q3 FY22, the number of DAU’s who were 13 years of age or older (13+) totaled 31.9 million – a number that has more than quadrupled over the past three years (7.1 million in Q3 FY19). As shown below, these 13+ year old users now account for 55% of all Roblox DAU’s – up 1,500 basis points from the mix reported in Q3 FY19.
(End of Preview)
https://thescienceofhitting.com/p/roblox-growing-up
thescienceofhitting.com
Roblox: Growing Up
In “Bigger Than Play”, I wrote the following: “The important thing to note, in my opinion, is that Roblox is making these moves from a position of strength. Simply put, they’re investing aggressively in pursuit of what they believe is a massive long-term global opportunity

Devin LaSarre@devinlasarreNovember 21
Not a company I follow closely, but I honestly appreciate how straightforward and digestible you make your analysis.

The Science of Hitting@tsoh_investing17h
Author
@devinlasarre Thanks Devin! Still a relatively new company for me, but have found it interesting to learn more about their history and their LT vision.