Nathan Worden@nathanworden02/23/2021
$332.6m follower assets
Bionano Genomics
Today I'm adding to Bionano Genomics. ($BNGO). I first wrote a brief memo about them back on January 12th. Back then the stock was at $5.36. It shot up and hit $15 about seven days ago, and is now back down under $10.
Here's some more background on what they do, and their competitive position. 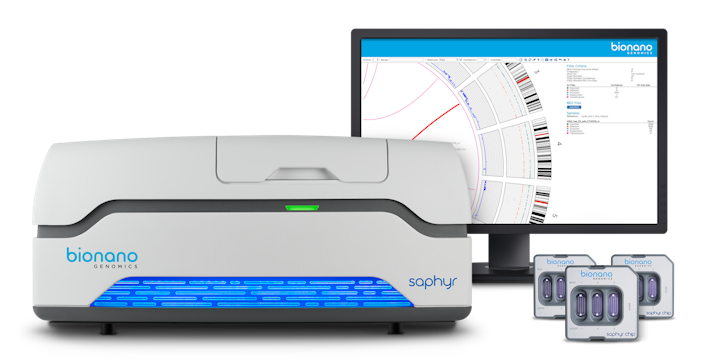 Bionano makes a machine called the 'Saphyr' which does genome imaging. The process they used is called Optical Genome Mapping (OGM).
Optical Genome Mapping involves four steps:
The reason this process is differentiated from Illumina and PacBio is that molecules are incredibly long, and many regions of the genome are very repetitive. You need to know not just the sequence but also the location of the sequence.
With Illumina the first step of sample prep results in highly fragmented pieces of DNA. That step destroys the structural information, losing important information about where the sequence was found in the genome. Illumina's sequencing is based on relatively short reads of around 150 base pairs or so. That type of approach is excellent at getting single base-pair resolution (if you map those base pairs back to the reference genome, you'd be able to determine if there was a single base pair change). But the problem is that the genome itself is highly repetitive.
Many chromosomes have sections that are relatively indistinguishable from other chromosomes. So when you are mapping a read from some section of the chromosome, you may not know what chromosome it belongs to. And that information is obviously biologically important- that's why we have 23 pairs of chromosomes to begin with. If you actually don't know where the read is coming from in the genome, it's difficult to understand the biological significance and it becomes challenging to determine whether there has been a change in genome structure if you're using that method.
PacBio has long-read sequencing- we're talking about 10,000 to 20,000 base pairs. The accuracy of those reads has improved dramatically over time. It's really an amazing platform for getting long reads that are highly accurate. But those reads have limitations in terms of looking at structural changes that are in the range of what's clinically relevant, which are on the order of hundreds of thousands of base pairs and millions of base pairs, not ten thousand.
One possibility is that Illumina and Bionano become complimentary. Sequencing and optical mapping working together in tandom. Sequencing for finding highly accurate single nucleotide changes, and optical mapping to reveal all of the structural variation that are 500 base pairs and bigger. With this setup it becomes possible to have comprehensive lists of genome variation, which is incredibly powerful in discovery research and has applications in clinical diagnostics.
I don't know the future, and so I own all three. My largest position is PacBio because of how quickly their technology is improving, but you could argue that PacBio could get stuck in the middle between Illumina and Bionano- winning "no man's land." This is why I am increasing my Bionano position.
I'm also increasing it because if you look at clinical diagnostics today, virtually every patient who is suspected of some form of a genetic disorder is having a structural variation analysis conducted. Guidelines from the ACMG prescribe the use of chromosomal microarrays, which is probably the best structural variation analysis that is used routinely today to look for structural variation. The same is true in cancer.
But the problem is, if you want to do structural variation analysis you have to use five different platforms :

Progress in the genome space has been driven by tools that are making it possible to drive up scale to industrial levels. Illumina has done an amazing job of making sequencing accurate, fast, and cheap. Bionano is going to take the five different tools required to do a complete structural variation analysis and turn them into one.
Because of this, I believe Bionano's Saphyr system will be used much more in discovery research. Rare disease companies will be empowered by the ability to search for repeat expansions and contractions in much broader patient populations. There are many more rare diseases that Saphyr can help uncover the driver mutations for.
Nature
ACMG Standards and Guidelines for constitutional cytogenomic microarray analysis, including postnatal and prenatal applications: revision 2013 - Genetics in Medicine
Microarray methodologies, including array comparative genomic hybridization and single-nucleotide polymorphism–detecting arrays, are accepted as an appropriate first-tier test for the evaluation of imbalances associated with intellectual disability, autism, and multiple congenital anomalies. This technology also has applicability in prenatal specimens. To assist clinical laboratories in validation of microarray methodologies for constitutional applications, the American College of Medical Genetics and Genomics has produced the following revised professional standards and guidelines. Genet Med 15 11, 901–909.

Noah Povis@noah40povis02/24/2021
does money go to rare disease research though?

Nathan Worden@nathanworden02/24/2021
Author
My bet is that most of the resources will go towards fighting cancer first. And if there are material advances made there (even just detecting it earlier), then there will be a flood of more money into rare disease research.
So yes, it's a bet that in the future rare disease research will be a much bigger market than it is today.
Might seem far-fetched, but consider this- Apple is a 2.1 Trillion dollar company, but they're not saving people's lives. Is it crazy to envision a future where the world's biggest companies are ones that are treating and curing life-threatening diseases? It's not currently the world we live in, but if gene sequencing, mapping, and editing tools are effective, that is a possible future.

Noah Povis@noah40povis02/24/2021
Also thank you for this detailed analysis. I actually sold my $BNGO position today at a loss... hopefully things work out for you!

Nathan Worden@nathanworden02/24/2021
Author
Happy to help!
And yep, I don't blame you- it's certainly higher risk and a bet on a future that I'd still have to consider speculative at this point.

Megh Reddy@meghz1702/25/2021
How are the unit economics and valuation today? Wondering if I don't have to repeat myself if you did that already.

Nathan Worden@nathanworden02/25/2021
Author
It's expensive any way you could look at it-
Bionano's Next Twelve Months Total Enterprise Value / Revenues is 187.53x <-- Which is kind of not meaningful since they haven't made a profit yet. Unit economics can't be great at this point, but the question is if they can improve a lot with scale (CEO Erik Holmlin thinks the total addressable market for the Saphyr system is 10,000 units).
The Saphyr system sells for $150,000, although I'm not sure if there are published numbers on the cost per unit to manufacture. Definitely interested though if someone has found some info on that.

Nathan Worden@nathanworden03/01/2021
Author
Well, from a top line revenue perspective, 10,000 units X $150,000 per unit would equal a a TAM of $1.5 billion.
I've seen BNGO company estimate of a total TAM of about $2.7 to $3.5 billion, which I think is taking into account revenue for ongoing supplies and services in addition to the $150k sticker price for the machine itself.
@imtinggg