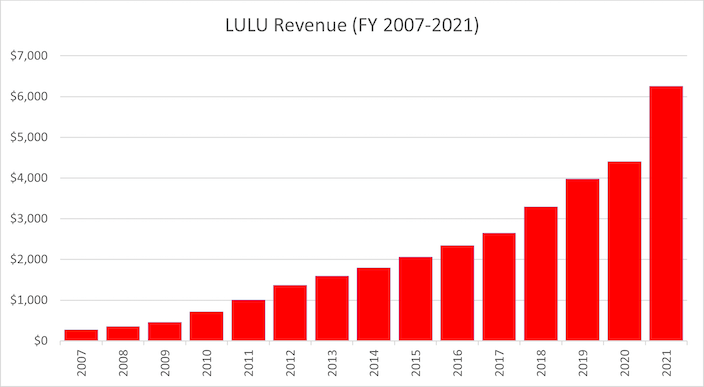 In 2019, the company announced a five-year growth plan called the “Power of Three”, which aimed to double company revenue by focusing on:
Perhaps aided by COVID-19 and rising remote work, Lululemon completed all these goals in three years, prompting them to release the new “Power of Three x2” plan earlier this year, aiming to once again double total company revenue in five years by focusing on the same benchmarks.
Despite recent growth acceleration, the overall macro picture cannot be entirely ignored: who wants to buy $120 leggings with 8% inflation? The answer: Lululemon customers, as the company has raised guidance on both revenue (6%) and earnings per share (8%) with each quarterly earnings report this fiscal year, as shown in the table below:

Lululemon was public during the Global Financial Crisis; so how did economic pressures affect them as a high-end retailer? They increased store count 69%, increased average revenue per store by 45%, and nearly doubled EPS from 2008-2010 – all impressive statistics when you consider their age and size of the company at the time.
Lululemon’s revenue per store has consistently been between $4-5 million every year since 2010 (excluding FY 2020, where most stores were closed due to COVID). This consistency jumps out because they have increased store count 559% since their first year as a public company. Clearly management excels at researching locations and setting themselves up for success. 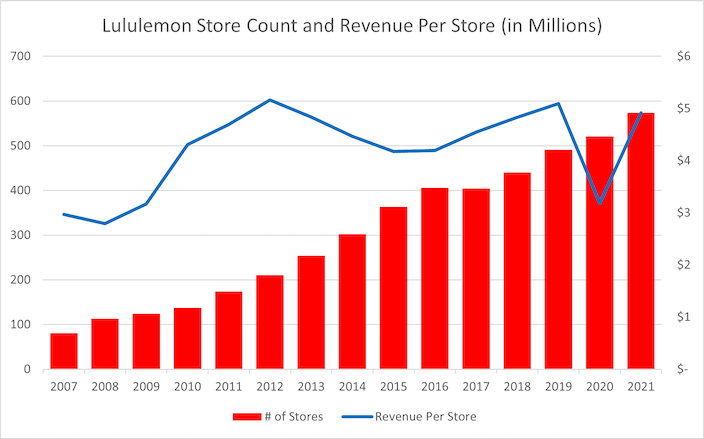 Lululemon has continued innovating: building out their men’s products, expanding their accessories, and most recently, expanding to women’s shoes (Author’s note: while my experience is anecdotal, I was blown away when the day after the shoe release, I tried to buy some for my wife and found that a lot of color and size combinations had already been sold out). Management seems to have excellent foresight for what their customers want, investing in R&D to develop and strengthen that relationship.
Despite all this progress in the business, the stock price is down 21% YTD and 29% over the last 12 months. Some of that can be attributed to the overall market crash, some of that can be attributed to a re-rating of sales and income multiples, and despite their P/E ratio demanding a premium at 35, it is one of the lowest ratios the stock has seen since the end of FY 2017 when their revenue was $2.6 billion, and their EPS was $1.90. If you had purchased the stock at the close of the last trading day of that fiscal year, you would have almost quadrupled your money in four years. Sometimes quality businesses demand premium prices, and Lululemon fits that bill.
Thus far, we have covered positive reasons for investing in Lululemon; however, management made a potential $500 million error in their capital allocation of digital fitness manufacturer MIRROR, as sales estimates were reduced by 50% from initial projections and management seems to be struggling to scale that business. Randall Konik, the most bearish analyst on Lululemon, has been calling the top on Lululemon since 2016, saying athleisurewear, their digital growth, and international opportunities have peaked. Last month, he defended his downgrade with the following:

After years of low (and incorrect) price targets, his most recent thesis can be reduced to: “Eventually, they will stop executing this well,” despite their history as a public company under multiple CEOs proving otherwise. Of course, their growth cannot continue forever, but it is hard to bet against a management team that beats their five-year plan in three and sets new ambitious targets for the next five years. Management has shown the ability to scale responsibly and consistently grow revenue, earnings per share, and free cash flow year over year. Lululemon is armed with experience and ambitious growth plans, they are constantly innovating and expanding into new product lines, and the market should greatly appreciate their consistency in 2023.

Conor Mac@investmenttalkSeptember 23
A man after my own heart! Great succinct way to pitch $LULU my friend!

Capisce Capital@capisce_capitalSeptember 23
Author
@investmenttalk @slt_research I honestly think I would have cried if a) Conor didn't contribute, and b) said I did a bad job LOL I aim to make fellow lulu fanatics proud :)

Nathan Worden@nathanwordenSeptember 23
Look at those buys! 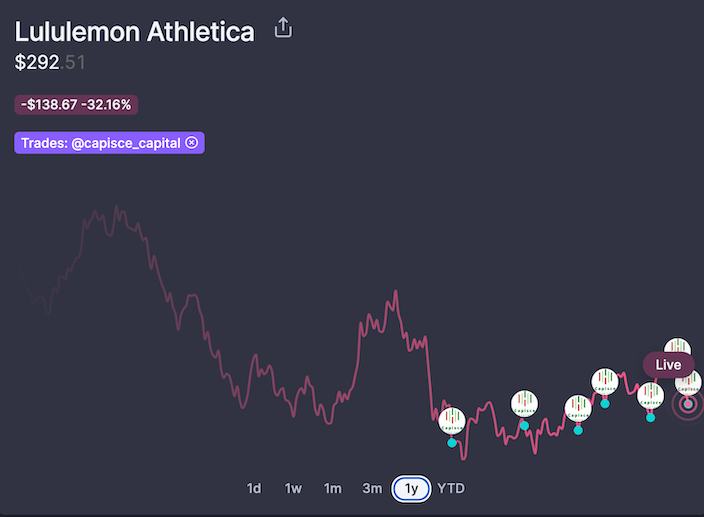 Capisce Capital@capisce_capitalSeptember 23
Author
@nathanworden I like to put my money where my mouth is, that's why I'm here ;) Just wait if it breaks that 52-wk low, I'll be selling organs to get more money into $LULU

SLT Research@slt_researchSeptember 23
Great pitch, there are so many things to write about $LULU and doing it with only 750 words is such a challenge.

Capisce Capital@capisce_capitalSeptember 23
Author
@slt_research Thanks, it really was difficult! I told @nathanworden last night that I was at like 840 and unsure of how to cut it down.. hopefully I hit enough of the pertinent points in my 750!

Capisce Capital@capisce_capitalSeptember 23
Author
If it helps get me any more votes... I promised my wife that I'd let her take a good amount of the winnings and go wild at Lululemon if we win - happy wife, happy life!!

Christian@christian7621September 25
This is very well done. It’s kinda funny I had no idea this was written yet I was researching the stock this weekend as well. Well first I started looking at ULTA, if you haven’t looked at them they are worth looking into as well, then I got into LULU. Both run exceptional especially during covid. Both have strong customer base with amazing loyalty. Both have a very clear plan for the future-something I really like