Before the FDA was formed, there were serious problems with food in the United States. False claims and improper ingredients were rampant. Rotten meat and spoiled packaged foods were staples of the American diet. Unsurprisingly, this led to all kinds of nasty illnesses.
Something had to change.
Henry Heinz was a vocal critic of the shady practices ubiquitous in the food industry, and he put his money where his mouth was by advocating for the Pure Food and Drug Act. Everyone else was selling food products in metal tins and opaque glassware to hide their disgusting lower-quality products. Heinz valued transparency and decided to use clear, uncolored glass - allowing the consumer to see exactly what they were purchasing. It also helped that his vibrant sauces were tasty enough to mask the unpleasantries of common questionable meats.
Herbert Riley, a Heinz employee, coined the term 'quality control' and helped develop strict sanitation practices for the production processes in the Heinz factories. Heinz Ketchup exemplified consistency, allowing the company to build a bond of trust with consumers. As it turns out, not ingesting botulism was something people cared about (and still is!)
While most food companies were busy trying to evade new legislation, Heinz was winning over the minds of consumers, and what started as a consumer preference quickly became a global affinity. The company grew, expanded its product offerings, and swiftly took substantial market share. From its founding in 1869 to the present, Heinz has continually won over the world’s condiment connoisseurs. 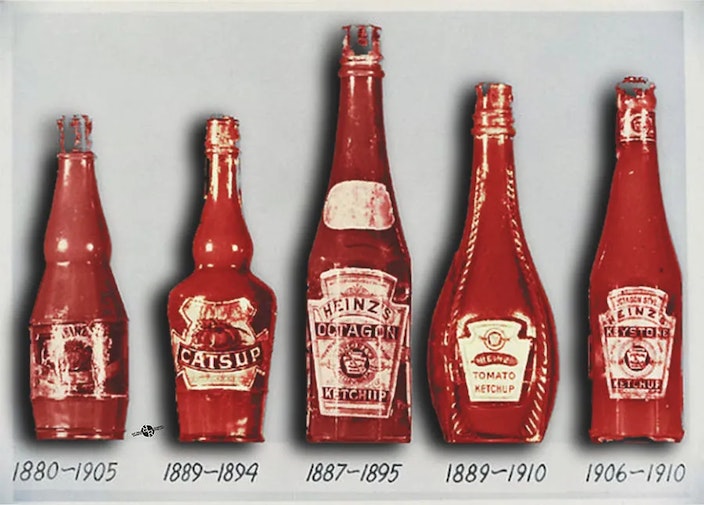 There are very few businesses with such tremendous staying power. Yet, even Heinz has not been untouchable. Thanks to technological improvements, modern production processes allow anyone to become a private label competitor after a few quick phone calls. Feeling the pressure, Heinz merged with Kraft in 2015 to broaden product offerings, extend global reach, and further enhance economies of scale. It’s difficult to say how the fight will continue to unfold, but for many of us, one thing hasn’t changed: We still feel a small sense of disappointment when a restaurant doesn’t have Heinz on the table. The ability to generate that kind of emotional response will probably carry KHC farther than most people think.
Too many investors gloss over evaluating competitive advantages. Few put in the time to truly identify distinct advantages, to what extent they are held, how defensible they are, and what kind of durability they can provide.
In an entire league of their own are the businesses whose secret sauce seems no secret at all. It could be brand, regulation, economies of scale, physical proximity, or a mix of these and more. Cigarettes. Ketchup. Rocks. When a business can operate transparently - as if putting its magic in a clear glass bottle - and it’s so effective that competition still can’t win, that’s something to behold. They wield an invariant strategy. From The Daily Coach:
"Back in the 1980’s Michigan Football had one of the best offensive lines in all of the college game. All-Americans and future NFL stars at every position. In one game when they were playing cross-state rival Michigan State, leading 14-0 the Michigan State defender Smiley Criswell hears Michigan’s play call from the huddle and immediately starts yelling, “off tackle right, off tackle right.” When Michigan’s left tackle Bubba Paris hears all of this as he waltzes to the line of scrimmage across from Criswell and says, “That’s right, it’s an off-tackle play. It’s coming right at you, and we’re snapping it on three and there ain't nothing you can do to stop it.” Three seconds later, Paris pancakes Criswell, and the tailback walks into the end zone for a touchdown."
What team are you going to bet on?
Read more at the link below:
https://invariant.substack.com/
invariant.substack.com
Invariant
Valuation. Business analysis. Markets. Finance with curiosity, creativity, and skepticism. Click to read Invariant, by Devin LaSarre, a Substack publication with thousands of readers.

Joshua Simka@tomatoJanuary 20
Wow! I'm really into food history. I didn't know that about this history of Heinz and the glass ketchup bottles. Some of those bottles look really cool. I suppose there's a kind of irony in how some diners and greasy spoons would surreptitiously refill the glass Heinz bottles that lived next to the napkin dispenser on every table with off-brand catsup!