BanklessDAO@banklessdaoJune 14
$9.3m follower assets
Zero Degrees Celsius
Dear Bankless Nation,
During bull markets, stuff like hacks, rug pulls, and de-peggings are shrugged off as one-offs and novelties as everyone’s too busy printing money.
In a bear, though, every unseemly exploit takes on a more apocalyptic tone. Scary tweet threads and whistleblower LARPers abound. There’s panic in the charts.
But there’s a signal within all the noise. Bear markets have a purpose.
These periods re-incentivizing building, teach the industry valuable lessons and separate the wheat from the chaff.
The collapse of Terra taught us about the importance of sustainable mechanism design.
This week’s unfolding case of Celsius and stETH is teaching us about the importance of transparency.
It also proves (again) why Decentralized Finance is better than Centralized Finance
A Very Long Tl;dr of stETH
Lido is a liquid staking protocol upon which users deposit ETH towards Ethereum 2.0 staking and receive stETH — “staked ETH” — in return.
stETH is a liquid staking derivative (LSD — nice!) that accrues staking rewards via rebases and represents a claim on the underlying ETH held by the protocol, which is routed to a variety of validators to be staked on the Beacon Chain.
Lido provides a valuable service by removing the opportunity cost of staking, enabling ETH holders to accrue staking rewards while retaining liquidity and the ability to utilize their assets within DeFi.
The protocol has been immensely successful, having accumulated more than 4.12 million ETH, a 31.9% share of the all ETH staked on the Beacon Chain. 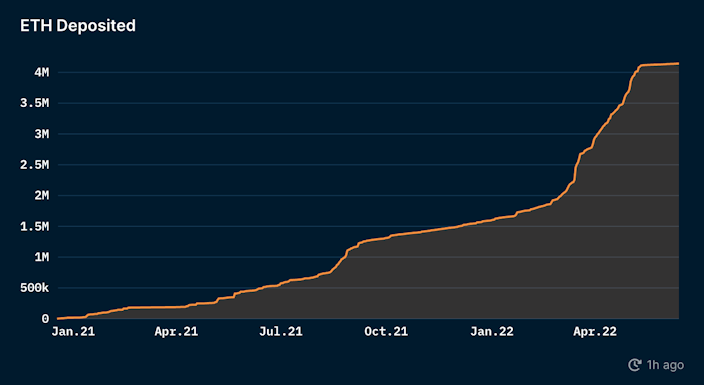 ETH Deposited in Lido: Source - Nansen
Beacon Chain withdrawals will not be enabled until after the merge, at which point each stETH will be able to be redeemed for a proportional share of the total ETH deposited into Lido. In the meantime, the only way in which stETH holders can exit their position is through secondary markets on DEXs.
It’s a feature, not a bug — right? The current lack of redemptions or liquidity for stETH poses little issue for holders confident that the Merge will be successful. It presents a big problem for entities looking to exit positions in size at pace.
So, about that…
The stETH “Non-Depeg”
The largest source of liquidity for stETH is the stETH-ETH pool on Curve. This pool intends to maintain a 50/50 balance between the two assets. It currently sits at a ratio of 21.7% ETH to 78.2% stETH.
At its current size, the pool holds just 127,155 ETH to 510,388 stETH. This means that not every stETH holder is able to exit their position. 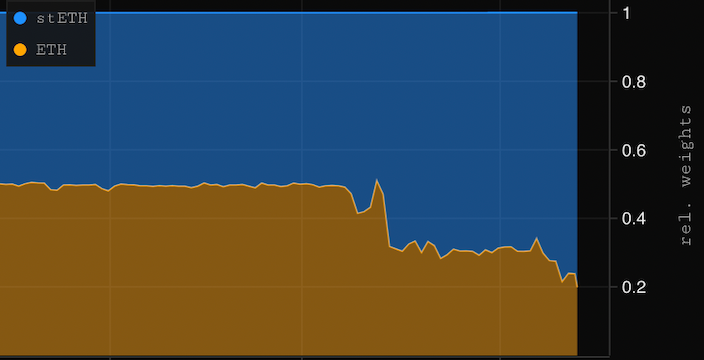 ETH/stETH Curve Pool Weights - Source: Parsec
This imbalance is the result of both liquidity providers withdrawing ETH and major stETH holders — in particular Alameda Research — exiting positions.
This has led the price of stETH/ETH (stETH relative to ETH) to fall from ~1 to ~0.935 on the exchange over the past five weeks.
In these uncertain times, it's clear that certain market participants are prioritizing liquidity.
It’s important to note that stETH does not have to trade at parity with ETH. The price of the LSD has no impact on the functioning of Lido nor the Ethereum 2.0 merge. In fact, this discount is to be expected during a bear market when liquidity is at a premium and fear is high.
However, the decline does pose significant risk to protocols that use stETH as collateral, and to the holders with the most exposure to it.
DeFi Exposure to stETH
Within DeFi, the exposure of stETH as collateral is largely concentrated within two protocols: Aave and Maker.
While just 4.9% of the total stETH supply is locked in Maker vaults, Aave has far greater exposure, with the protocol holding more than 1.46 million stETH, worth ~$1.85 billion and accounting for ~34.6% of the LSD’s supply
Many DeFi users have utilized Aave to gain levered exposure to the intrinsic staking yield of stETH by employing a strategy that looks like this:


This strategy has been so popular that it has even become tokenized by various asset management DAOs, with Index Coop and Galleon launching products like icETH and ETHMAXY to satisfy this demand from users. 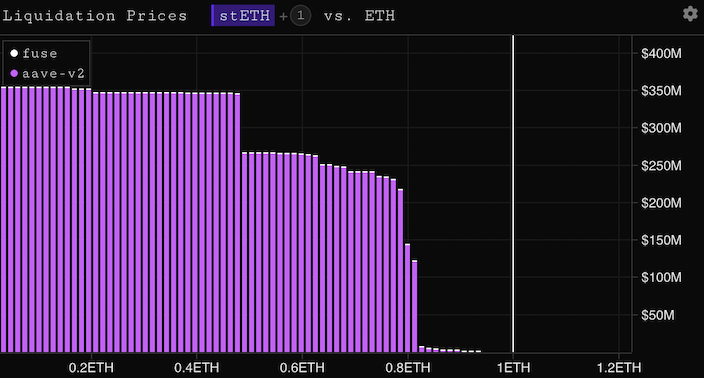 stETH Liquidation Prices - Source: Parsec
While this recursive looping can be lucrative — and theoretically low-risk when the stETH/ETH ratio is close to 1 —users can still get liquidated should this ratio fall. This is exactly what has been happening.
There is currently ~$236 million of stETH eligible for liquidation should the stETH/ETH price hit 0.75. That number is about the same as Aave’s trading volume for a single day, and that ratio is a long way off.
Although Aave does not expect to incur bad debt should stETH/ETH fall further — and the protocol is considering taking precautionary measures to reduce risk — these liquidations could result in the price of stETH dropping even more.
However, the greatest damage from the decline in the stETH/ETH ratio won’t be within DeFi, but instead: CeFi.
Celsius Contagion
CeFi lending platform Celsius is reported to have considerable exposure to stETH.
The lender, which in 2021 was reported to have $28.6 billion in AUM, currently claims to have 1.7 million users and 151,534 in BTC.
The Celsius platform is notorious for its yield farming endeavors that generate yield for customers. As Celsius is centralized, its lending book is opaque. There is no way for users and speculators alike to assess the health of the platform. Instead, the company’s wallets are tracked by on-chain analytics platforms like Nansen.
Celsius places a lot of assets around the ecosystem. It’s exposed. That’s why it’s vulnerable. It has allegedly lost north of nine figures between several different DeFi exploits, though this figure has not been confirmed by the company. 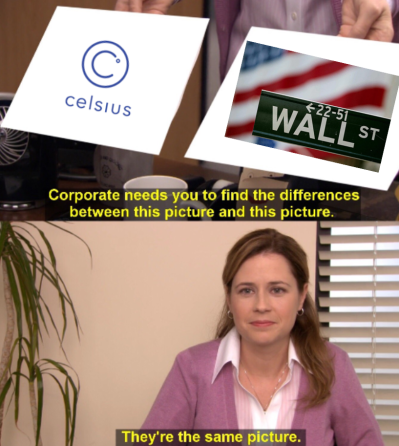 With a stETH liquidation run in play, the company must find a way to liquidate these holdings in order to satisfy withdrawal requests from customers. Given that on-chain liquidity is drying up, the price of stETH is falling.
Redeeming the asset for locked ETH is not an option. Meanwhile, Celsius’ own CEL token has plummeted over 64% in the past week. 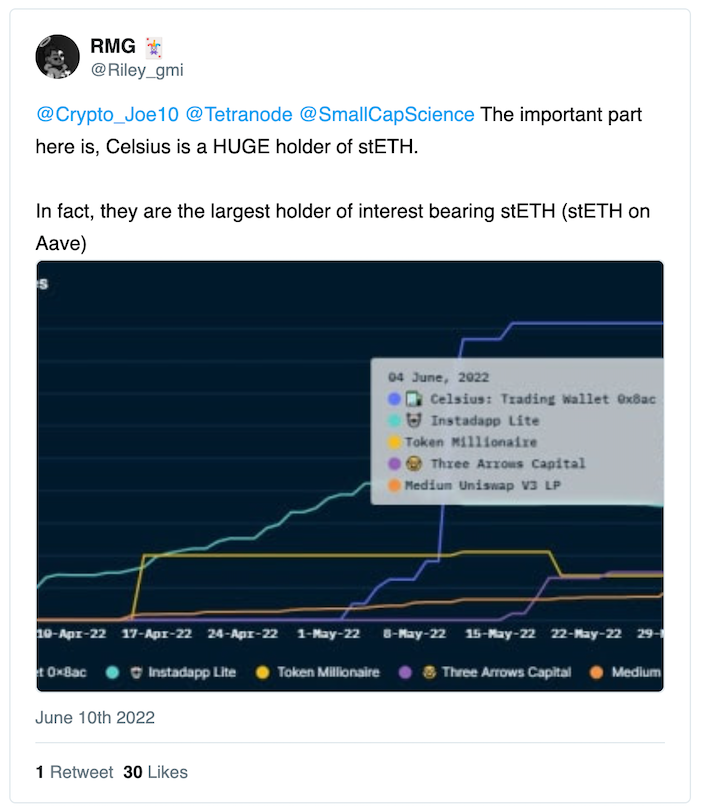 On June 12, Celsius paused withdrawals, swaps, and transfers on the platform. This comes after some users were alleging the company placed accounts into an enforced “HODL Mode,” a security feature that temporarily restricts withdrawals from a users account. There is currently no timeline for when things will change.
Halting withdrawals from the platform is an ominous sign. The recent actions of Celsius and the opacity of its CeFi infrastructure have further fueled uncertainty. Celsius halting withdrawals during a bank run significantly damages trust among present and future users. It just reinforces the very type of system DeFi is being built against.
It’s unclear if this poses a risk to the solvency of the platform, but it doesn’t look great. Over the past 7 days, the CEL token has dropped from $0.76 to $0.15. This time last year, it was over $7. Yikes.
Should Celsius require depositors to take a haircut, or worse, go insolvent, it would be a damning indictment of CeFi and a volatile market event for Ethereum. Celsius overheating could cause contagion among CeFi institutions exposed to the platform. A similar situation is also unfolding at Swissborg, another centralized bank.
Both Celsius and its counterparties could become forced sellers — if they aren’t already — worsening the already substantial sell-off in the markets that we’ve seen over the past few days.
The Bigger Picture = Why DeFi > CeFi
This fiasco sternly reiterates the use case for DeFi — and in particular, its transparency. CeFi apps like Celsius are not decentralized finance platforms, they’re crypto banks.
With DeFi, we can monitor the risk and solvency of a platform 24/7/365 in real-time. We can see exactly how much exposure Aave has to stETH, at what prices these positions would be liquidated, and how much liquidity is available to service them. As a result, users can more easily make informed decisions.
In the case of Celsius and other CeFi platforms, we don’t have insights and are forced to trust clearly fallible entities with huge vulnerabilities. And this deep in the bear, it’s open season for soft, white underbellies.
Ultimately, this represents a case of the crypto industry taking out the trash.
Vulnerabilities, weak infrastructure, and centralized points of failure will be exploited by market forces. It’s nauseous short-term, but ultimately healthy in the long run.
Within the Ethereum ecosystem, everything is connected, so that could cause big volatility for ETH in the short term. However, it’s worth pointing out that aside from Aave and Celsius, known, concentrated exposure to stETH is relatively limited.
Should LSD continue to bleed against ETH, it may present an attractive opportunity for savvy investors to grow their stack when withdrawals on the Beacon Chain are enabled.
It’s unclear how things will play out — and what fate has in store for Celsius.
But by the end of it all, DeFi will be antifragile and bulletproof.
----------------------------------------
This article is by Ben Giove, for Bankless
email.mg1.substack.com

BanklessDAO@banklessdaoJune 14
Author
@007 Thanks Jon— this is a good tweet as well. We heard behind the scenes that the SEC was in communication with Celsius, which caused them to change the setup of their products a couple of months ago— namely, they created an 'Earn' account in addition to a Custody Account.
If you weren't an accredited investor, you couldn't move money into the earn account and get rewards like you previously had been. 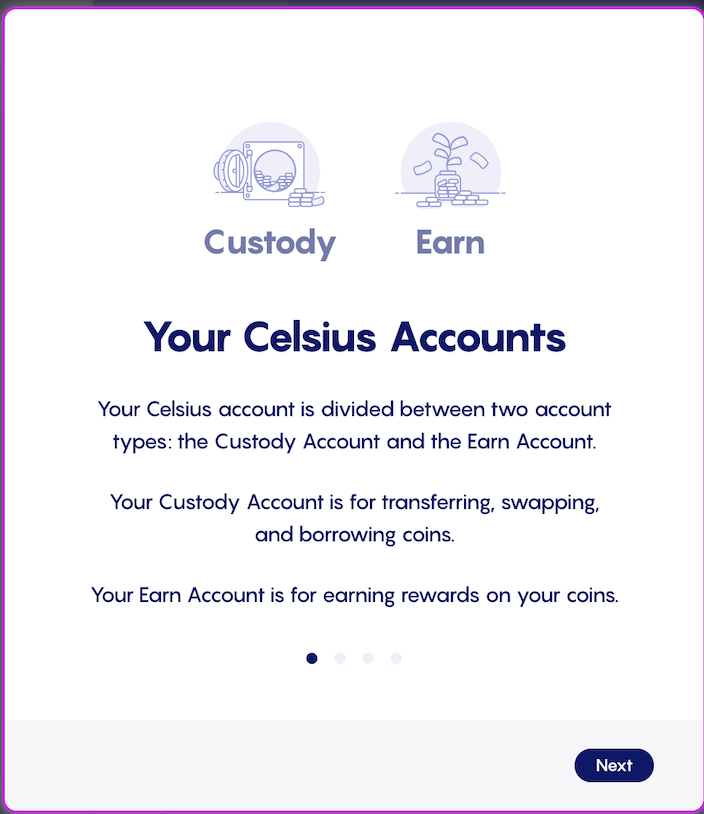 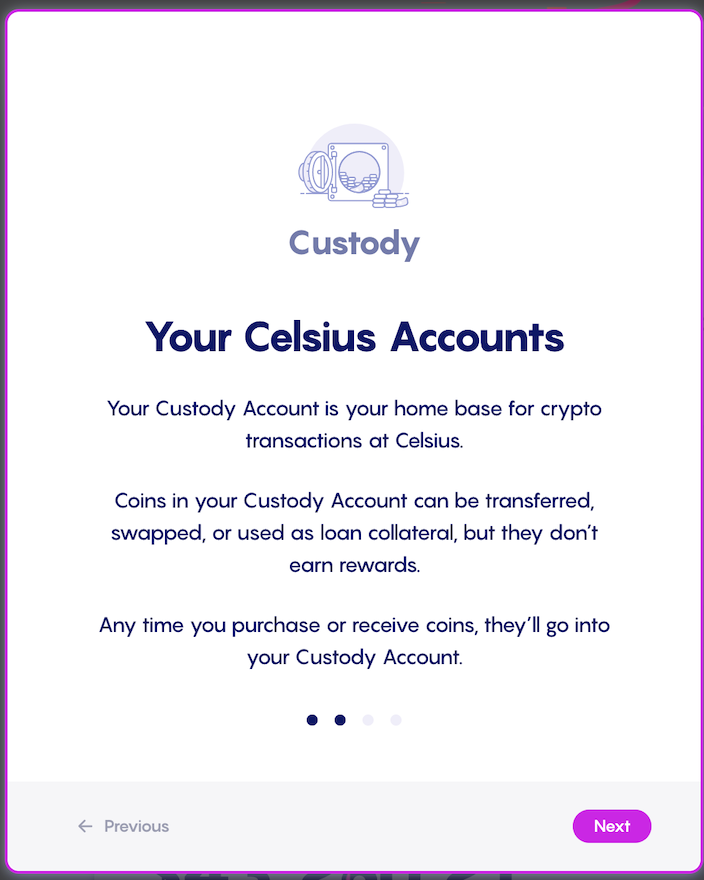 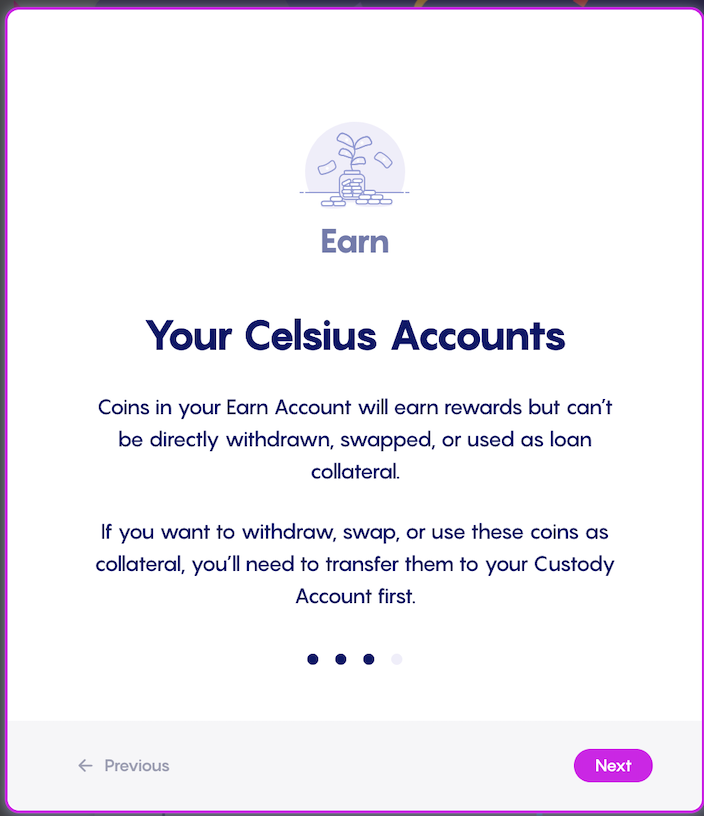 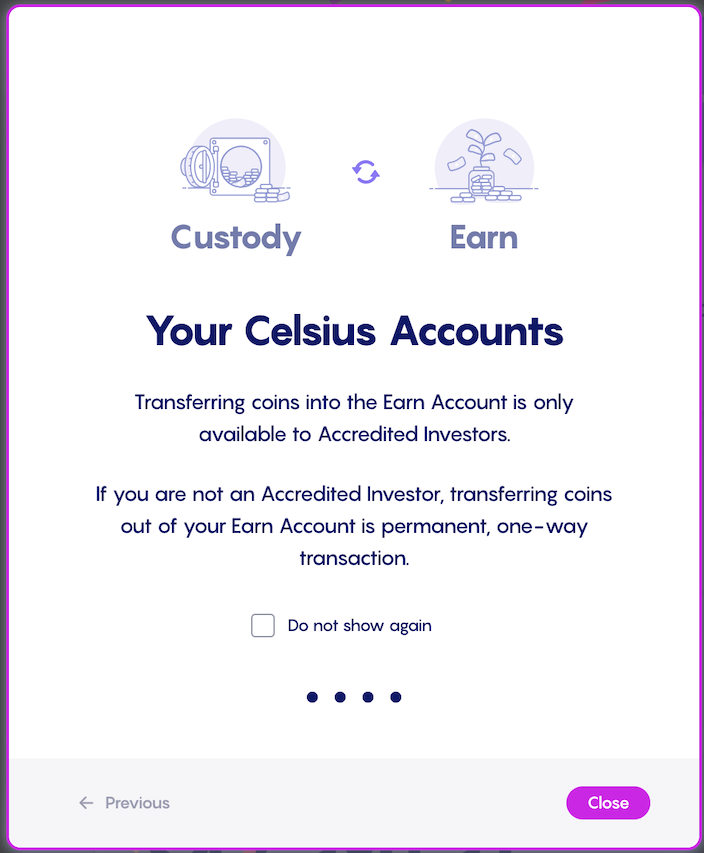