The Science of Hitting@tsoh_investingJanuary 16
$36.1m follower assets
"Regardless Of Price": Warren Buffett and Coca-Cola
This is an extended preview of today's write-up, exclusively for Commonstock readers. To read the remainder of the post, please subscribe to the TSOH Investment Research service.
https://thescienceofhitting.com/p/regardless-of-price
In the summer of 1988, Warren Buffett began aggressively accumulating shares in a new investment: The Coca-Cola Company. He spent $593 million to buy 226.8 million shares of the company’s stock that year at an average cost of ~$2.6 per share (split-adjusted). He purchased an additional $431 million in 1989, bringing Berkshire’s position to 373.6 million shares. Finally, in 1994, he purchased another $275 million of Coca-Cola stock, bringing the position to 400 million (split-adjusted) shares at an average cost of ~$3.2 per share. (Interestingly, the average share price paid for the 1994 purchases was more than 3x higher than the 1988 and 1989 purchases). 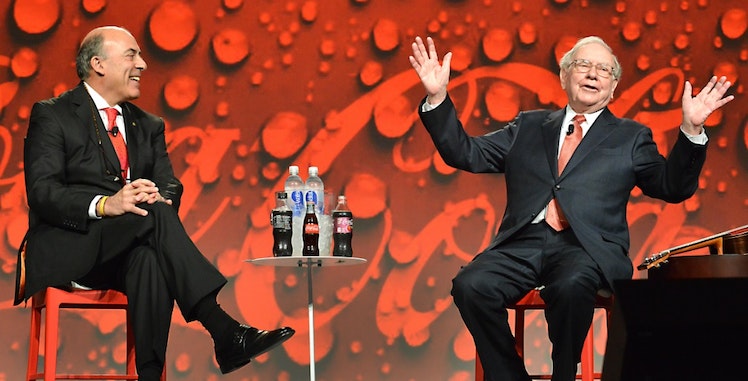 At yearend 1994, the Coca-Cola stake had a market value of $5.2 billion on a total cost basis of $1.3 billion; at that point, Coca-Cola accounted for ~34% of Berkshire’s total common stock portfolio (note that Berkshire’s total assets had a value of $21.3 billion at yearend 1994). Simply put, this was a very significant position for Buffett – by far the largest investment, in dollar terms, that he had made up to that point in his career (the second largest position at yearend 1994 was Gillette, with a market value of $1.8 billion).

It’s interesting to think about what occurred throughout this period (call it the 17-year window from 1988 – 2004). First, Coca-Cola’s stock went on a huge run. While the company generated significant earnings growth throughout much of this period, with EPS increasing at a mid-teens CAGR from 1988 – 1998, the stock did even better: as opposed to the ~15x trailing P/E Mr. Market ascribed to the business at yearend 1988, the stock ended 1998 with a P/E of ~45x trailing earnings. As a result of those two variables, the market value of Berkshire’s position in Coca-Cola at the end of 1998 was $13.4 billion, or >10x higher than its cost basis. (The company’s market cap at yearend 1998 was ~$165 billion, compared to ~$16 billion in 1988.)
Another notable series of events took place at Coca-Cola when Roberto Goizueta, the company’s CEO since 1981, passed away in October 1997.
As Buffett wrote in that year’s shareholder letter, Coca-Cola “lost the leader responsible for its outstanding performance” over the past 15+ years, someone who “displayed a brilliant and clear strategic vision that was always aimed at advancing the well-being of Coke shareholders”. As retold by Alice Schroder in “The Snowball”, Buffett was displeased with the direction the company was heading towards under Goizueta’s replacement, Doug Ivester (Buffett had been on the Coca-Cola board of directors since 1989, a position he would retain until 2006). In late 1999, Buffett told Herbert Allen that “we picked the wrong guy”; before the year came to a close, Ivester saw the writing on the wall and told the board he would step down from his post.
Ivester’s successor, Doug Daft, faced his own share of challenges as the soda giant’s leader. He ultimately decided to resign in February 2004, which sent Coca-Cola’s board searching for its fourth CEO in the past seven years. By the end of that year, the stock was at ~$21 per share – roughly 50% below where it traded at the 1998 highs (the P/E contracted back to 15x - 20x).
In summary, this was a very significant position for Buffett (it accounted for more than 30% of Berkshire’s common stock portfolio throughout the entire 1990’s). In addition, the stock price experienced significant volatility during the 1990’s and early 2000’s, with the P/E swinging from the mid-teens to more than 50x earnings (at the 1998 highs) and back again to the mid-teens. Finally, the company was navigating material internal developments that Buffett was intimately familiar with (given his seat on the board of directors), most notably as it related to finding a suitable replacement for Goizueta.
That brings us to the part of the story that I find very interesting: Despite all of this, Buffett didn’t buy or sell a single share of KO throughout this entire period; in fact, Buffett hasn’t bought or sold a single share of Coca-Cola for Berkshire Hathaway since 1994 (nearly three decades). 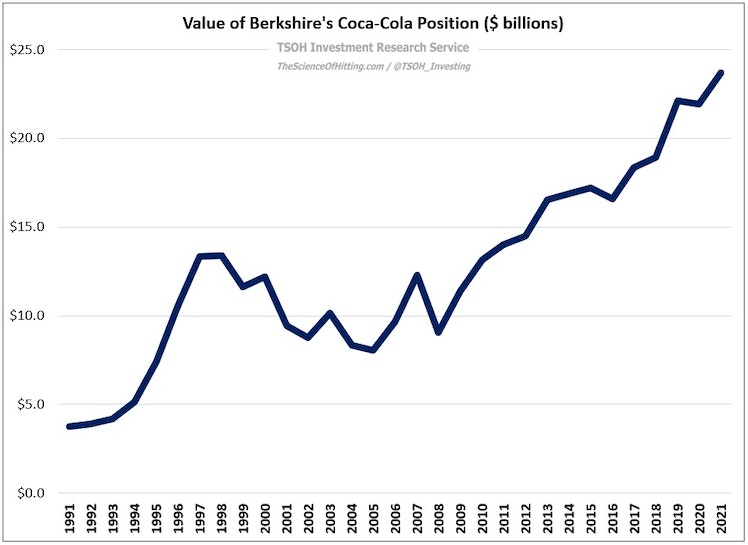 Put yourself in Warren Buffett’s shoes for a moment: if you had 30%+ of your equity portfolio invested in a single company, how closely would you be watching - and reacting to - these large stock price swings?
Whether this was the “right” decision - specifically, to continue owning KO in the late 1990’s - is a worthwhile discussion...
(End Of Preview)
https://thescienceofhitting.com/p/regardless-of-price
thescienceofhitting.com
"Regardless Of Price"
Warren Buffett and Coca-Cola

Joey Hirendernath@joeyhirendernathJanuary 16
"if you had 30%+ of your equity portfolio invested in a single company, how closely would you be watching - and reacting to - these large stock price swings?" - This one is a difficult one to answer as we often see Buffett's actions with the advantage of hindsight. One of those times I guess where Pascal's quote comes in use - “All of humanity's problems, stem from man's inability to sit quietly in a room alone.”