Nathan Worden@nathanworden08/25/2020
$332.7m follower assets
Is It Too Early to Invest in the Metaverse?
The "Metaverse" has been getting a lot of buzz lately; an always-on, real-time world in which an unlimited number of people can participate at the same time.
Sounds like science fiction, right?
Well, yes, today it is. And it will be decades or centuries before we can do everything we imagine we'd want to do in the virtual world.
But just because we're early doesn't mean we're too early. Especially if you're like me and believe that some form of the Metaverse is an inevitability. I think it will happen, and when it does, a huge amount of creativity and value will accrue to that space.
So the question I'm trying to answer is when.
If you invest too early, your capital is wasted because it could have been put to more productive uses in the meantime. If you invest too late, there's no upside because the gain will have already been realized. The little sliver of a moment thats "just right" is actually quite small- its right before everyone else realizes the imminent opportunity and right after all of the hardest work building the thing has already been done.
I don't think there is much chance of hitting the goldilocks zone spot on. But I'll settle for the "Window of acceptability" where I invest admittedly too early, but its close enough to the right time that its really the only probabilistic shot I have at riding the wave. 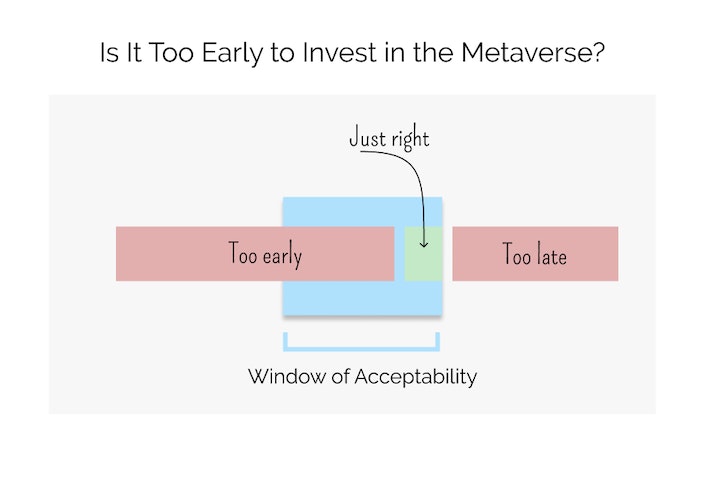 The Metaverse is likely to emerge as the different entry points to the online world such as gaming, online concerts, and augmented reality begin to connect. Looking at companies in this space and their technology efforts, my bet is that we're 30+ years away from some fully realized version of an online shared reality.
Though the Metaverse won't be something that is suddenly switched on, I still personally think we are still in the leftmost side of the "Too early" rectangle in the diagram above. But I'll be keeping a close eye out for indications that we are entering the "Window of Acceptability."
No comments yetBe the first to add your insight!