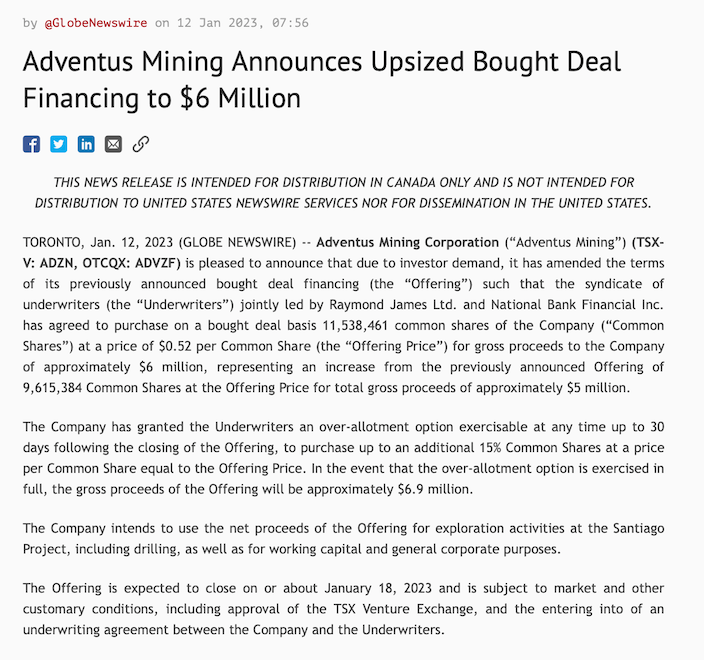 This morning Adventus Mining announced that due to investor demand, they would be increasing the amount of their previously announced bought deal financing from $5M to $6M. Underwriters Raymond James & National Bank agreed to purchase common shares at a price of $0.52. With no warrants, I felt this was a reasonable offering. As usual, with dilution the market doesn't respond positively and the share price is taking a dip to $0.51. This seemed like an excellent opportunity to BTD, as I anticipate more positive developments in the near term for the company. Worth noting that they also recently signed an investment contract with the Ecuadorian government. 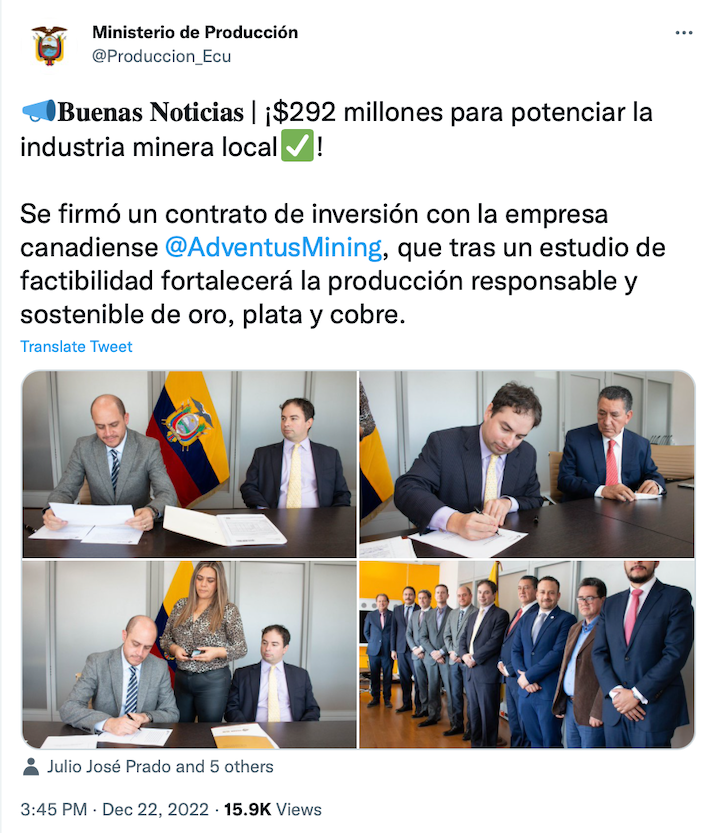 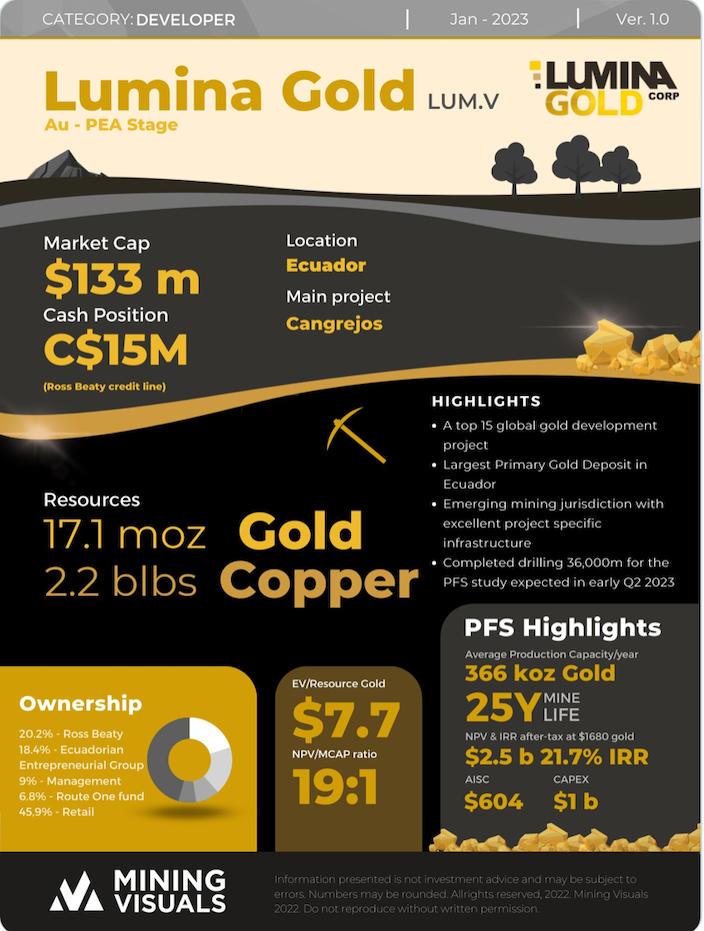 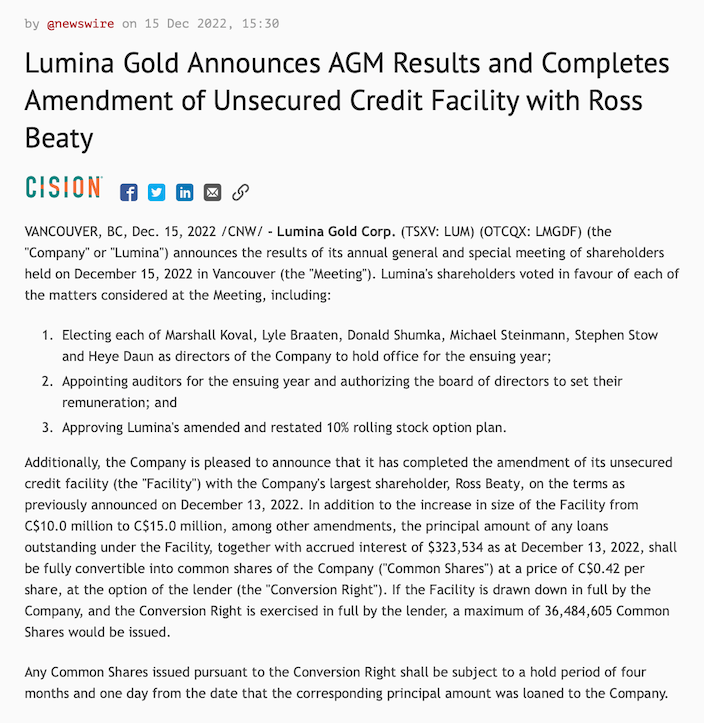 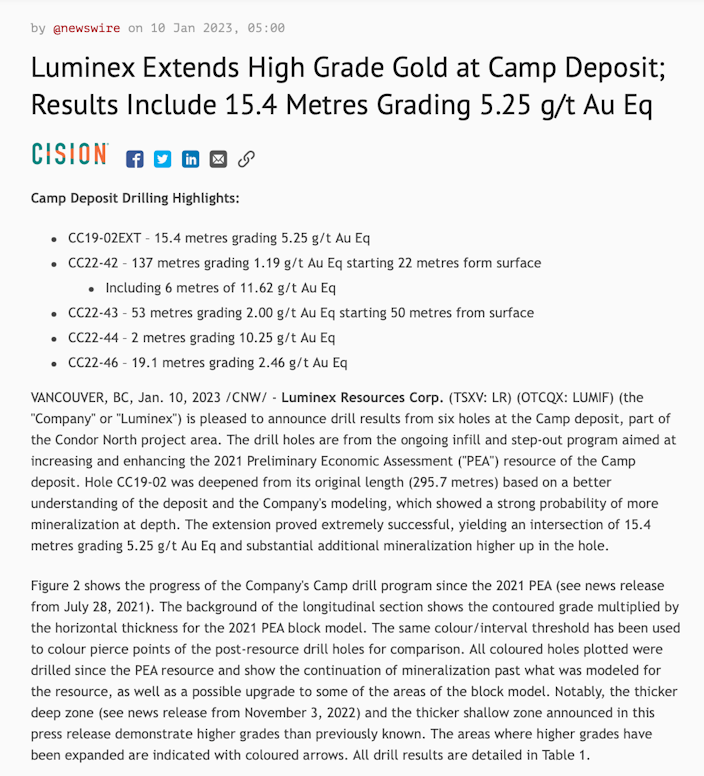 Luminex announced drill results from their Camp deposit on January 10th, aiming to enhance the 2021 PEA resource.
https://ceo.ca/@newswire/luminex-extends-high-grade-gold-at-camp-deposit-results
Another positive development for Luminex as their partner, Anglo American commenced drilling at the Medusa Copper Target: 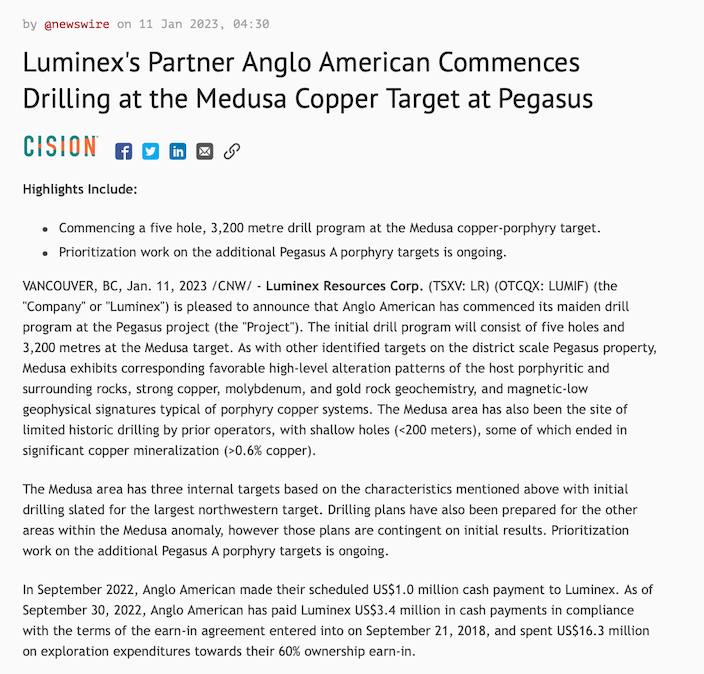 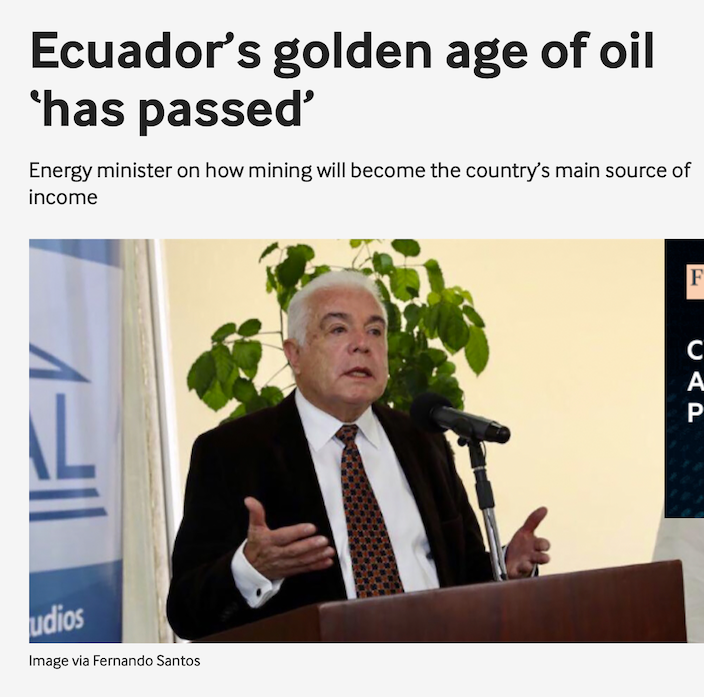 https://www.fdiintelligence.com/content/interview/ecuadors-golden-age-of-oil-has-passed-81769
After a decade under the government of president Rafael Correa and his leftist Citizens’ Revolution, followed by an unremarkable presidential term of his protégé-turned-foe, Lenín Moreno, Ecuador has pivoted since Guillermo Lasso was elected in 2021, to show the world that Ecuador is “open for business”.
Mr Lasso has passed legislation, with varying degrees of success, to liberalise key sectors, such as oil, mining and telecoms. Ecuador’s energy minister, Fernando Santos, tells fDi that mining will replace oil as Ecuador's main source of income.
**_"We believe that the mining of copper and gold will replace oil as the main source of income for the coming years. There are bigger mines in the late stages of exploration that we are excited to see come online soon, as mining overtakes oil.
_**
Our reputation for foreign investment was tarnished by Mr Correa’s presidency. Our new president has passed laws giving guarantees to foreign companies to come back to Ecuador, and has rejoined the International Centre for Settlement of Investment Disputes.
Mr Lasso has also been active with the indigenous communities to educate them on the benefits of foreign investment. This is a big challenge — engaging with the indigenous communities. We have to right the wrongs against them. We have to work in harmony with them and make sure that the extractive industries do not destroy their lives, but rather improve them." 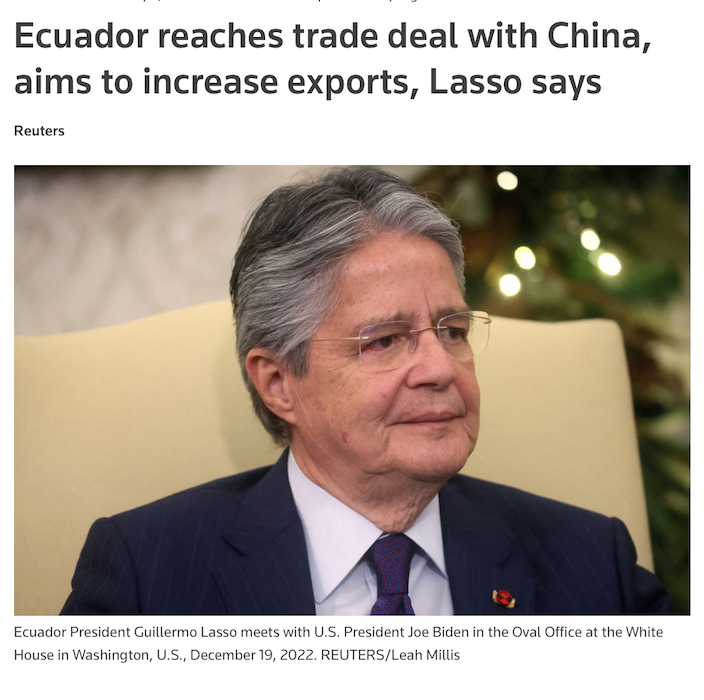 https://www.reuters.com/markets/ecuador-reaches-trade-deal-with-china-aims-increase-exports-lasso-says-2023-01-03/
Ecuador President Guillermo Lasso said on Tuesday the country has sealed a free trade deal with China, an agreement expected to increase exports and boost growth in the South American country's industrial sector.
"Good news to start 2023. The negotiation between China and Ecuador has been successfully concluded," Lasso tweeted.
With the deal, Ecuadorean exports will have preferential access to China.
https://commonstock.com/post/2b5a44b3-a1cb-4b0d-a05f-8bac581ee0d4 by @jennymanydots
As always, please DYODD - junior mining stocks carry a higher risk than other sectors. I am happy to answer any questions that I can.
Benjamin Albers@benjaminalbersJanuary 12
Great post. Thanks for sharing