Conor Mac@investmenttalkSeptember 11
$334.7m follower assets
The Services iPhone
Source: (Stratechery)
It was in “2016 that Apple first articulated the so-called “Services Narrative”; after a quarter in which the company’s new iPhone 6S posted relatively disappointing sales, CFO Luca Maestri made the case on the earnings call that it was a mistake to think of Apple as a hardware company, subject to the vagaries of consumer demand.” Since the birth of the services narrative, Apple’s trailing number of paid subscriptions across its suite of services has expanded from 150M to 860M. $AAPL 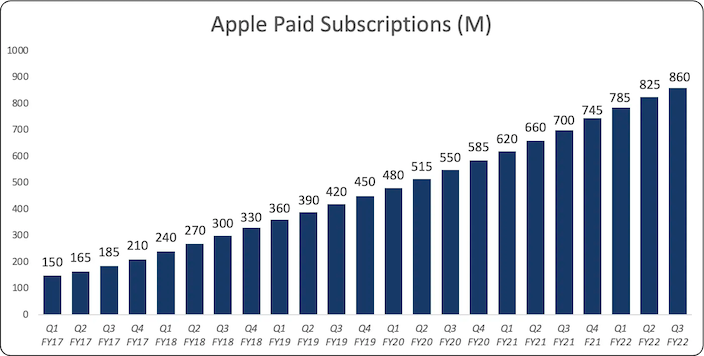 Services revenue stood at $24.3B in 2016 and would expand to $68.3B by 2021, with the rate of growth accelerating from mid-teens to mid-20s in the five years before and after Luca coined that sentence. Already this year, with one quarter remaining, services have racked up $58B in revenue. Not only has the segment grown, but it has also become a more integral piece of Apple’s revenue composition, accounting for ~19.4% of the revenues Apple has collected so far in 2022, up 810 bps from 2016. 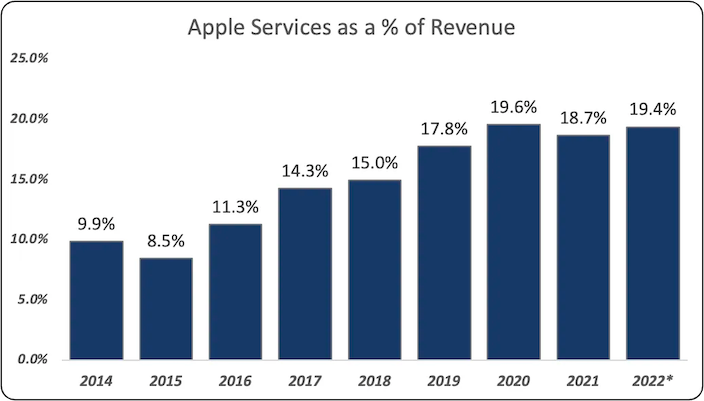 Ben Thompson, someone who has been writing about Apple for near enough a decade, possibly longer, felt unconvinced about this new narrative in 2016; remarking that “Apple’s services revenue numbers are impressive, but it is very clear that the company remains a differentiated hardware company”. It is typical of a premium hardware business to focus on product quality and be unrelenting on cost. Conversely, it is the intention of a services business to focus on increasing the number of subscribers. These two goals appear to be in competition with one another. Apple has long juggled both of these contesting factors but has historically placed more emphasis on the former. Put differently, they have been a hardware business first, and a services business second. In this memo that I share today, Thompson revisits a plethora of his older articles discussing Apple’s product launches and competitive position, and fathoms an updated conclusion on Apple’s services narrative based on the actions that the company took in their latest September product release.
On a somewhat related sidenote, I wanted to shout out Liberty for his perspective on Apple in a recent edition of Liberty’s Highlights.

A common critique of Apple is that “they don’t innovate anymore”, and this grates me somewhat because it demonstrates a lack of understanding with regard to the business life cycle and the nuances of innovation; a word which has lost much of its meaning today. Radical innovation, that which is truly paradigm shifting, is like lightning. It comes around seldom, and when it does it strikes hard and fast before disappearing. Incremental innovation then takes the reigns and moves the world along one piece at a time. This is particularly true in more mature markets; as voiced by Jim McKelvey:

Quote from The Innovation Stack
Just 15 years ago, few knew what a seamlessly internet-enabled smartphone was, let alone an iPhone. Today, we are essentially cyborgs with supercomputers (and high-quality cameras) strapped to our palms; capable of things that would be thought unimaginable at the turn of the century. 15 years is such an incredibly short space of time, and it amazes me how few people appreciate that. You could argue that following the iPad in 2010, there has been no radical innovation, sure. But the incremental innovation that has taken place in between has still been phenomenal in my book. This is not me suggesting Apple is still as dominant 30 years down the line. Rather, the notion that Apple is past its peak is strenuously exaggerated.
325: Thoughts on iPhone 14, Cloudflare Infrastructure, Inside the CCP, Airlines Pilot Shortage, Chi...
"This isn’t just about feelgood, it’s about effectiveness and productivity."
www.libertyrpf.com

Invested Thought@investedthoughtSeptember 11
Loved reading this. I've never thought about how the replacement cycle magnifies the upgrade in the mind of the consumer since you're going from a 2-3 year old device to a new one, but it's so true!

Conor Mac@investmenttalkSeptember 12
Author
@investedthought Yea, works in practice too. I have a 12 right now, but not super compelled to upgrade to a 14. When I had a 10, the leap from 10 to 12 was pretty huge imo.
My partner went from an 8Plus to a 13 Pro Max and it was like night and day.

StockOpine@stockopineSeptember 11
Fantastic piece Conor. Especially, the explanations on what innovation is.

Conor Mac@investmenttalkSeptember 11
Author
@stockopine innovation was my masters subject. Not that this really means anything, but it helped me appreciate just how special radical innovation is.

StockOpine@stockopineSeptember 11
@investmenttalk it definitely means something especially when you perform stock analysis. You have an edge on that which others may not.