The Science of Hitting@tsoh_investingJanuary 9
$36.1m follower assets
Floor & Decor: “A True Category Killer”
This is an extended preview of today's deep dive, exclusively for Commonstock readers. To read the remainder of the post, please subscribe to the TSOH Investment Research service.
https://thescienceofhitting.com/p/floor-and-decor-a-true-category-killer
“I was able to see customers' reactions to a retail company that reinvented a category. Home improvement was historically done in lumber yard type settings, small hardware stores, or a combination of both. The Home Depot really came in and reinvented the way that was done.
I was on the floor when someone walked in and saw a Home Depot store for the first time… I saw how they were overwhelmed by the assortment, by what the store was. And they'd complain, ‘My gosh, this place is too big and there's too much stuff.’ So, when I got recruited to come to Floor & Decor [in 2012], and I walked into the store in Boynton Beach, Florida, I saw the same reaction from customers I’d seen in the 1980’s and the 1990’s [at The Home Depot]… That experience of being on the floor and seeing the customer’s reaction to our stores was huge.”
- Floor & Decor CEO Tom Taylor (HD employee from 1983 – 2006)
In 2006, after 23 years at The Home Depot, Tom Taylor took off his orange apron. He spent the next six years at a private equity firm before returning to the world of retail; in December 2012, he became CEO of Floor & Decor (FND), a chain of 31 stores with $335 million in annual sales. As noted in the above quote, Taylor accepted the position because he could see the significant opportunity ahead; as he later said at an investor event in 2017, “Floor & Decor is a true category killer.” In Taylor’s first decade, Floor & Decor experienced astounding success: 2022 revenues will be nearly $4.3 billion – an increase of more than 10x since 2012 (10-year CAGR: +29%). 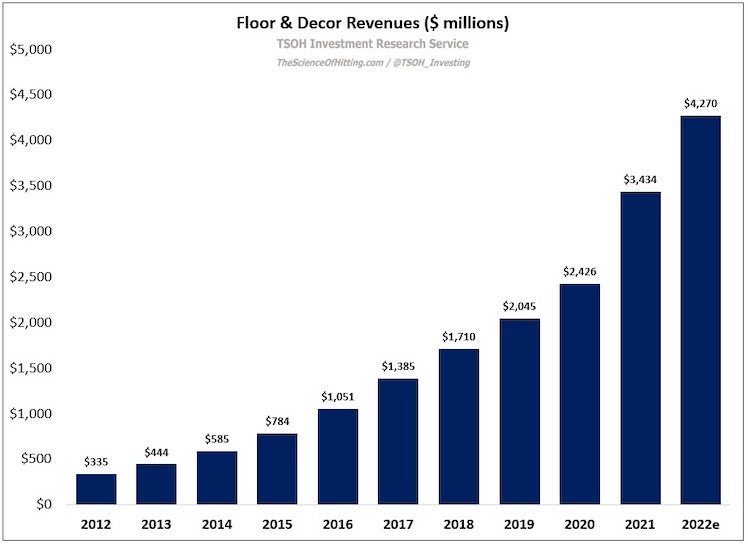 That growth reflects a combination of improved unit economics (sales per average store roughly doubled over this period, to ~$24 million in 2022e) and a meaningful increase in the total store count (up ~6x since 2012). 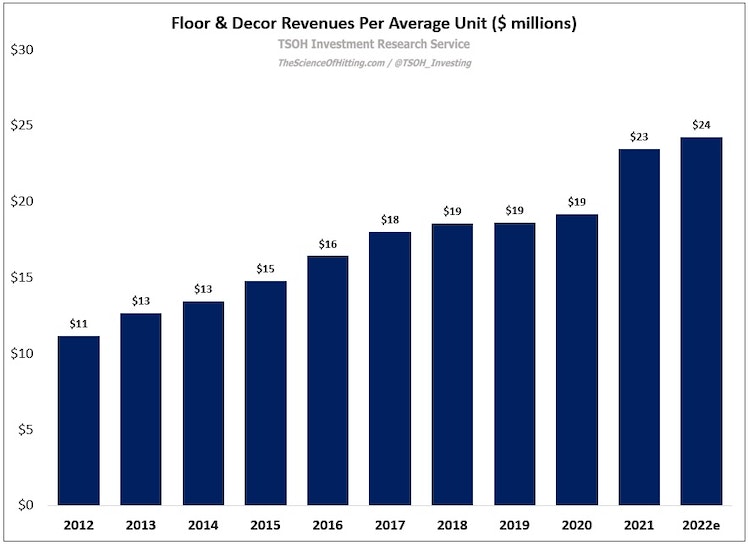 As we think about the per store productivity at FND (revenues per average unit and same store sales growth), it’s important to understand the typical maturation of a store. As discussed at the company’s 2022 Investor Day event, a new store typically generates year one sales of roughly $15 million. Over the course of the next 4-5 years, the store will mature to normalized (average) sales of roughly $27 million annually. As we think about same store sales (SSS), with new stores included in the SSS calculation after they’ve been in operation for 13 months, there’s a sizable tailwind (waterfall) that positively impacts FND’s comps (“we've historically said new stores added about 400 basis points to our overall comp”). In addition, as it relates to average unit volumes, the metric naturally benefits over time from a rising percentage of mature stores in the base (2021 annual report: “almost 60% of our stores have been opened for less than five years”). 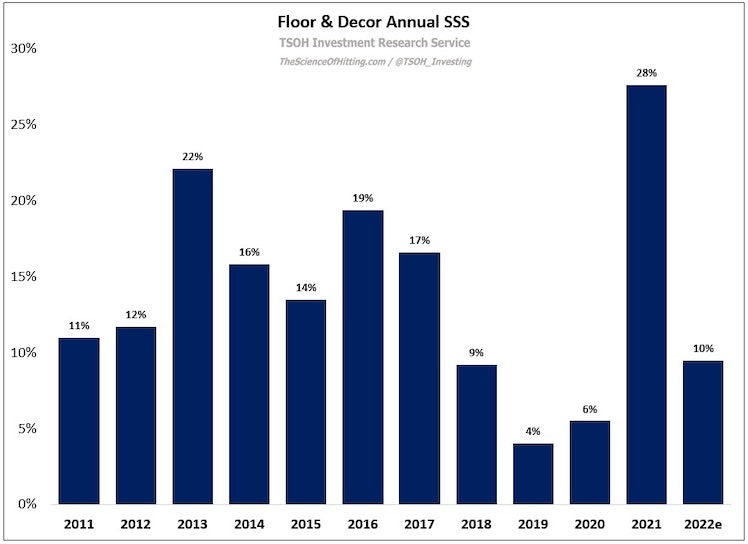 Before digging deeper on the company’s financials, let’s take a step back: what is Floor & Decor’s positioning within the flooring marketplace and what explains its impressive results over the past decade?
At a high level, the company’s competitive set can be placed into two buckets: (1) independent and specialty flooring stores and (2) large box home improvement retailers like The Home Depot and Lowe’s.
Starting with the independent and specialty flooring stores, these competitors have broadly faced market pressures for some time: as President Trevor Lang noted at a recent investor conference, the number of independent competitors has shrunk significantly over the past 15 years (from ~22,000 to ~14,000), with a corresponding hit to their position in the marketplace (“we have a lot of opportunity to continue taking market share from smaller competitors”). Independent and specialty flooring stores are disadvantaged relative to FND on a number of important variables (brand recognition, scale, supply chain and sourcing, etc.); as I see it, there’s no real solution to that problem, and it will grow larger over time. Independents typically operate much smaller boxes than Floor & Decor (~20,000 square feet and ~80,000 square feet, respectively); in addition, they face pressures from the working capital / cash flow requirements associated with carrying a significant quantity of in-stock SKU’s (“A lot of times, they don't have the inventory; they have to special order… It makes it incredibly difficult to compete with us.”). Overall, while independent and specialty stores still account for a meaningful percentage of the market, my bet is they will be ongoing share donors.
On the other end of the spectrum are the home improvement chains, most notably Home Depot and Lowe’s. While they clearly do not suffer from a lack of name recognition or access to capital, they sell a broad range of merchandise to customers. As noted in Home Depot’s annual report, the company generated $9.2 billion in flooring revenues in 2021, or roughly $4 million per store; as noted above, the average FND generates roughly $24 million in annual revenues. (That said, as I’ll discuss in the next paragraph, note that HD is generating that ~$4 million from a few thousand square feet of selling space, compared to ~80,000 square feet at FND.) 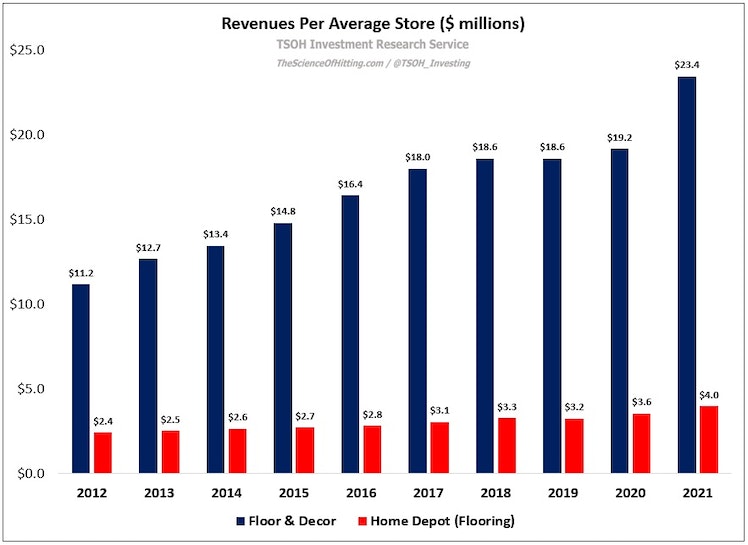 (End of Preview)
https://thescienceofhitting.com/p/floor-and-decor-a-true-category-killer
thescienceofhitting.com
Floor & Decor: “A True Category Killer”
“I was able to see customers' reactions to a retail company that reinvented a category. Home improvement was historically done in lumber yard type settings, small hardware stores, or a combination of both. The Home Depot really came in and reinvented the way that was done

Devin LaSarre@devinlasarreJanuary 9
Enjoyed the full writeup. Hadn't looked into this company previously and found the payback period and performance of mature stores vs costs especially impressive.

Benjamin Tan@consumeowntechJanuary 9
I am invested in $FND as well. Fun fact - Tom Taylor is my neighbor, and I hear the flooring in his house is awesome !

The Science of Hitting@tsoh_investingJanuary 12
Author
@consumeowntech This is great! If you're friendly with him and he's willing to read the post I'd LOVE to hear his thoughts :) That said, I assume he's a pretty busy guy haha.

Benjamin Tan@consumeowntechJanuary 12
@tsoh_investing In the two years I have lived in this neighborhood, I have never seen him! One day perhaps, when a neighbor throws a party and invites everyone ;)