The Science of Hitting@tsoh_investingJuly 25
$35.4m follower assets
$NFLX: “In The Right ZIP Code”
This is a preview of today's TSOH write-up (Netflix: "In The Right Zip Code"). To read the remainder of the post, please subscribe to the TSOH Investment Research service.
https://thescienceofhitting.com/p/netflix-in-the-right-zip-code
“Most companies that are great at something — like AOL dial-up or Borders bookstores — do not become great at new things people want (streaming for us) because they are afraid to hurt their initial business. Eventually these companies realize their error of not focusing enough on the new thing, and then they fight desperately and hopelessly to recover. Companies rarely die from moving too fast, and they frequently die from moving too slowly.”
- Netflix co-CEO Reed Hastings
On Tuesday, Netflix reported its Q2 FY22 financial results. As expected, it was a difficult quarter: the company lost 970,000 paid subscribers globally, with outsized declines in the UCAN region (Netflix’s home market and its largest geography by revenues). And while the company projects a return to sub growth in Q3 (+1 million), it will still be well below the pre-pandemic levels that investors were accustomed to. In addition, Netflix plans to crack down on password sharing and launch an ad-supported (AVOD) tier in 2023 – moves that will add incremental complexity to the company’s business model. 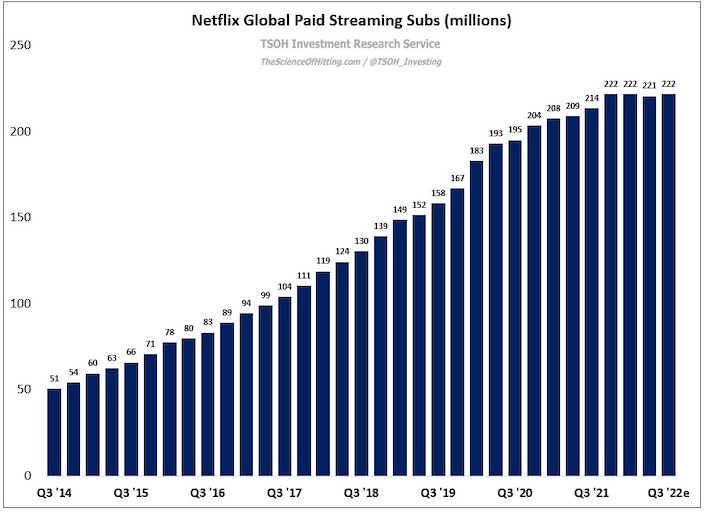 Mr. Market is clearly concerned by this recent course of events; despite a nice pop for the stock in response to the Q2 results, NFLX is still down ~70% from its November 2021 highs. The question that matters most to me is what these recent results indicate about the long-term health of the business; is Netflix wilting in the face of heightened competition, or does it have some combination of factors – namely competitive advantages and a best-in-class leadership team - that will enable the company to navigate through this current malaise while continuing to hold onto the leadership position that it has established in the global streaming / VOD business?
International
As discussed in “Regional Economics and Global Scale”, Netflix’s International business has been the primary driver of the company’s subscriber growth over the past few years (+73 million subs since YE FY18). As shown below, each of the company’s International geographies reported YoY subscriber growth in Q2, led by strength in APAC (+25% YoY); in total, these regions have added 12.2 million net subs over the past year. 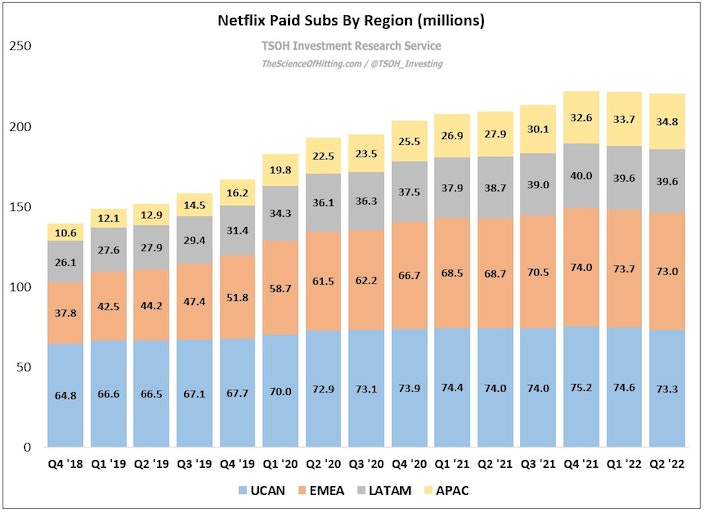 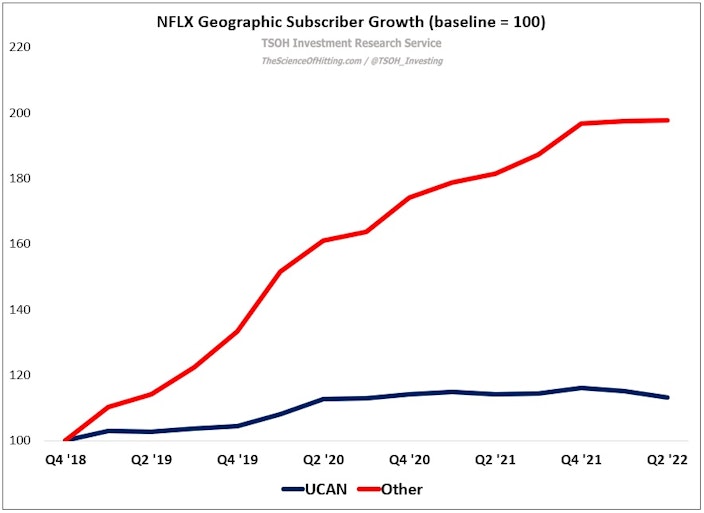 It appears from the commentary in Netflix’s Q2 letter that India may be seeing improved sub growth (“ARM in APAC was -2% YoY on a F/X neutral basis, due to the impact from our price decrease in India last December as well as plan mix”). But as we’ve seen with Disney, growth in markets like India presents a bit of a conundrum for investors: simply put, all subscribers are not created equal (from an economic perspective). I think that’s a manageable “problem” for Netflix, particularly if content can travel globally (there have been numerous examples in the past few years to support that conclusion). They can be thoughtful about their local content investments to appropriately account for the attractiveness of the current opportunity, while leveraging the strengths provided by global scale. Importantly, that puts them in position to be a relevant competitor in a large market that may become a meaningful contributor to the business over the next decade. Said differently, while most competitors are ”forced” to narrow their focus to what’s most appealing today, Netflix can truly invest for the long-term. (India is a notable / extreme example, but this thought process applies in other regions too.)
With all that said, the pace of International subscriber growth at Netflix continues to decelerate; as shown below, non-UCAN subs grew 6% YoY in Q2 2022 (to 147.4 million) – the slowest YoY International growth rate on record for the company. As discussed last quarter, management believes that external factors, such as the pace of connected TV (CTV) adoption and macro headwinds, are presenting short-term challenges for the business. 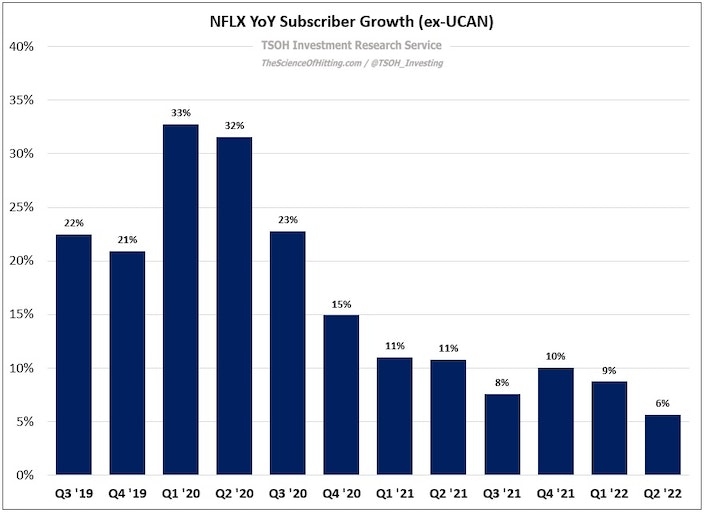 The big question is whether the International business will eventually exhibit penetration rates comparable to UCAN, which would imply a sub base that is at least 2x – 3x larger than today. (“Netflix actually wasn't trying to compete with HBO; they're trying to compete with the cable bundle.”) To achieve that outcome, as the company is learning in regions like India, they will need to tweak pricing and plan structures, localize content offerings, etc., to meet the unique needs of each market. Even success will undoubtedly take many years to attain; that said, I think Netflix remains in the pole position among its industry peers to achieve that long-term objective (with Disney as a clear #2).
UCAN
On Thursday, Nielsen reported that Netflix accounted for ~7.7% of all U.S. TV time in June 2022. That outcome, which reflects the massive success of “Stranger Things” (season four generated 1.3 billion hours viewed in the first four weeks following its release), represents a nearly 100 basis point improvement in Netflix’s engagement share (% of total U.S. TV time) from the prior month. Said differently, Netflix’s incremental viewership gain from May 2022 to June 2022 was comparable to HBO Max’s total usage in June 2022. (Think about that for a minute.) By the way, note that streaming has gained ~500 basis points of market share (total U.S. TV time) in the past five months; that data point provides some supporting evidence for Reed’s prediction on the Q2 call: “It's definitely the end of linear TV over the next 5-10 years”. 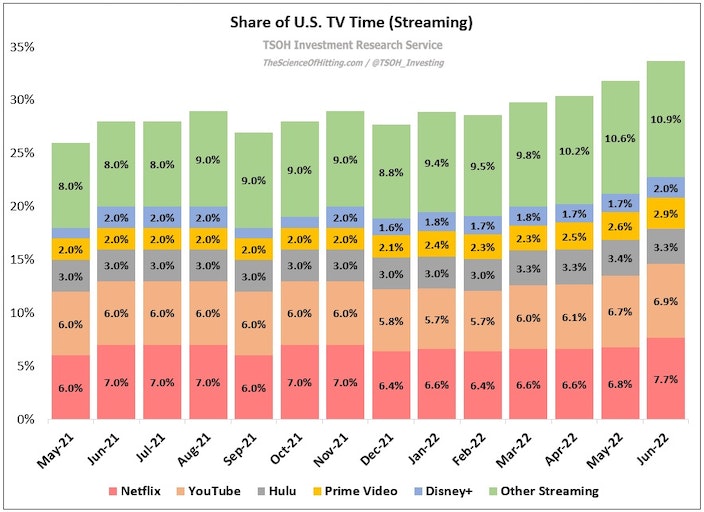 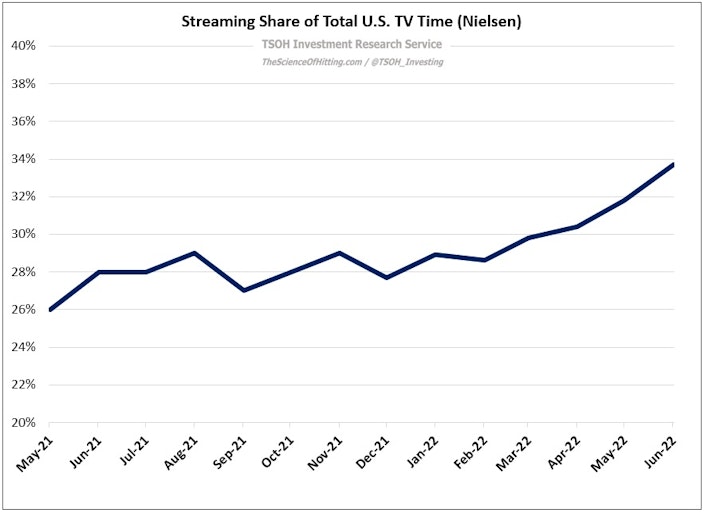 Conor Mac@investmenttalkJuly 25
Feel like YouTube is so underrated still to this day, when it comes to media/tv time, and socials (shorts).

Karan Malhotra@karan10489July 26
@investmenttalk I think people look at differently because of the user generated content (instead of originals) + being a cog in the Google ad machine which lumps it together with FB/TikTok instead of the streaming giants. That said I definitely watch more YouTube than Netflix, I just don’t remember what I watched as much