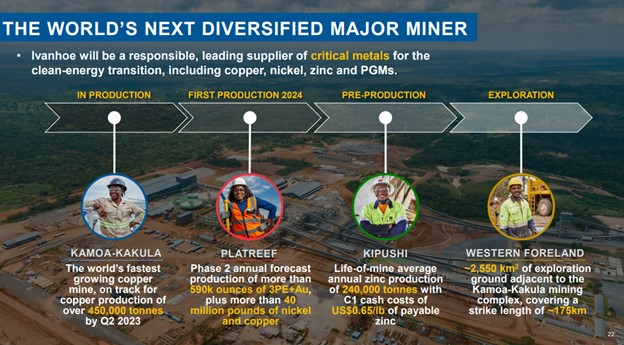 Ivanhoe Mines offers significant upside potential for those investing in the mining space. With an excellent balance sheet, exposure to copper, zinc, nickel, gold, and the platinum-group-metals, $IVN.TO is a cash printing machine - all during what many are calling a commodity super-cycle.
For those new to investing in the mining sector, one of the key pieces of advice offered by seasoned investors is to “follow the name”. Certain individuals are revered in the industry due to their phenomenal track record. Among the most well-known is American/Canadian billionaire financier Robert Friedland. Recently inducted into the American Mining Hall of Fame for his accomplishments, Ivanhoe President Marna Cloete stated that Friedland has ‘been recognized by leaders of the international financial sector and mineral resource industries as an entrepreneurial explorer, technology innovator and company builder. He has successfully developed a portfolio of respected public and private companies whose initiatives have led to several of the world’s most significant mineral discoveries and mine developments, applications of disruptive technologies and contributions to significant economic growth in established and emerging markets in the Asia Pacific Region, Southern Africa and the Americas.’ Among his many successes, it is Ivanhoe Mines that may prove to be Friedland’s greatest legacy.
Platreef Project:
On May 9, 2022, Ivanhoe Mines announced the completion of the Platreef Project's Shaft 1
changeover to a production shaft, as well as the first blast on the 950-metre level, which marked the commencement of lateral mine development toward the high-grade Platreef platinum-group-metals, nickel, copper and gold orebody, with first production anticipated in the third quarter of 2024.
In February 2022, Ivanhoe Mines announced the outstanding results of a feasibility study for the Platreef Project confirming the viability of a new phased-development pathway to fast track Platreef into production in Q3 2024. The Feasibility Study yields an after-tax NPV8% of $1.7 billion and IRR of 18.5% at long-term consensus metal prices. At spot prices as of May 6, 2022, the after-tax NPV8% increases to $3.5 billion and the IRR increases to 27%.
Kamoa-Kakula Project:
Commercial copper production was declared early for Phase 2 at the Kamoa-Kakula Mining Complex, which set a new quarterly production record during the period, with 55,602 tonnes of copper in concentrate produced. Copper production from Kamoa Copper’s first two phases is projected to exceed 450,000 tonnes per year by Q2 2023.
During Q1 of 2022, Kamoa-Kakula had an operating profit of $380.5 million. Phase 3 will increase total processing capacity to more than 14 million tonnes of ore per annum, and grow annualized copper production to approximately 600,000 tonnes by the fourth quarter of 2024. This production level will elevate Kamoa-Kakula to the world’s third-largest copper mining complex, and the largest copper mining complex in Africa.
Western Foreland Project:
During Q1 of 2022, Ivanhoe commenced a regional drilling program, expected to total
approximately 95,000 metres on its Western Foreland licences, which cover approximately 2,407 square kilometres.
Kipushi Zinc Poject:
In February 2022, Ivanhoe Mines and Gécamines signed a new agreement to return the
ultra-high-grade Kipushi Zinc Mine back to commercial production. Ivanhoe Mines announced the positive findings of an independent feasibility study (sensitivity analysis at spot zinc prices of approximately $1.70/lb. (May 6, 2022), results in an after-tax NPV8% of $2.4 billion with an after-tax real IRR of 75.8%) for the planned resumption of commercial production at Kipushi based on a two-year construction timeline.
Balance Sheet:
Ivanhoe Mines has a strong balance sheet with cash and cash equivalents of $562 million as at March 31, 2022, and expects that Kamoa-Kakula’s expansion capital for Phase 2 and Phase 3 will be funded from copper sales and facilities at Kamoa.
As always, please DYODD and if I can answer any questions you may have, I am happy to do so.

Jennifer@jennymanydots6d
Author
@007 It definitely is! Working on a suggested reading list, and that one is among the top.

Jon Bond@0076d
@jennymanydots you gotta hand it to him. Made 3 of the greatest mine discoveries in the history of prospecting. Voisey Bay, OT and this one in the DRC - all unbelievable finds. 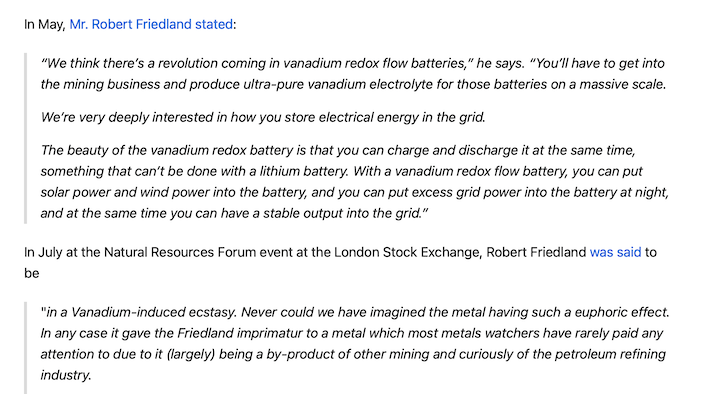