BanklessDAO@banklessdaoJune 23
$9.3m follower assets
How to Spot the Next Bear Market Flop Token (Before It’s Too Late)
Hint: it has to do with tokenomics, treasuries, and governance.
By Ben Giove for Bankless
Bear markets are opportunity markets.
As valuations compress and bull market froth is rinsed away, projects with strong fundamentals, dedicated teams, and enough runway to weather the crypto winter are positioned to survive first and then thrive. This presents a huge opportunity for investors.
If the 2018-2019 bear market was any indication, there will be a select handful of performers that deliver outsized returns even as the carnage plays out.
For example: during a relatively muted 2019 for the wider market, Chainlink (LINK) and Synthetix (SNX) rallied 486% and 2924% respectively.
Picking winners is extremely difficult, but investors can drastically increase their odds of doing so by not only focusing on quality projects, but by also training themselves to identify projects to avoid.
Let’s walk through some warning signs to keep in mind when researching a project so your bear market bags don’t go kaboom. 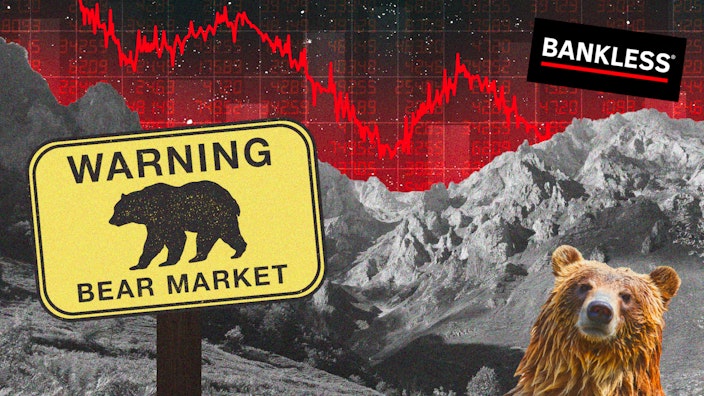 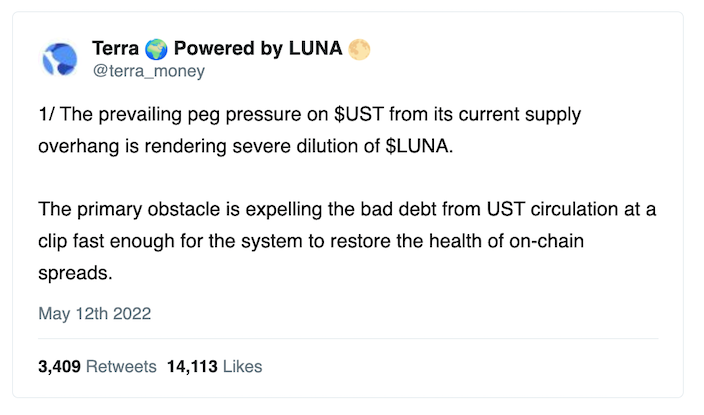 Tokenomics are about supply and demand. While no token can stave off the unrelenting sell-pressure that comes with a bear market entirely, the nuances of tokenomic distribution and supply schedule can allow investors to get a better sense of where sources of structural selling may lie.
When looking at a token’s supply dynamics, the most crucial factor to look at is what percentage of its supply is circulating. Many tokens — particularly in DeFi — launch with a “low float,” or with a small percentage of its supply circulating.
This can often lead to significant discrepancies in a project's market-cap relative to its fully-diluted valuation (FDV), as new tokens are often raised to unreasonable valuations shortly after launch due to retail investors bidding up this smaller pool of tokens.
While it differs by the token, those with a low float — especially ones with a rich valuation — are more likely to have sources of structural selling to endure during the bear market. Those with a higher percentage of their supply circulating on the open market are likely to brave the bear more effectively. 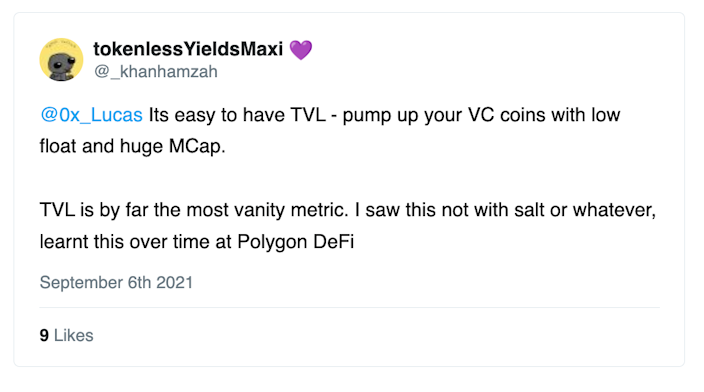 The sell pressure for these low float tokens typically comes from two sources:
The first is insider unlocks, as many tokens have a significant portion of supply allocated to team members and investors. These are typically structured with a cliff, the length of time after launch before unlocks begin, followed by a vesting period, or the period of time over which insider allocations will unlock.
While there is uncertainty as to whether an insider will sell their tokens as soon as they begin to vest, these unlocks present a source of sell pressure from entities who — despite weakness in the market — may have been able to invest at a cost basis that is significantly lower than the current price of the token.
An additional wrinkle of uncertainty is that private round valuations are rarely disclosed, placing current and prospective tokenholders at an information disadvantage.
Despite this information asymmetry, savvy investors can use tools like Dove Metrics, Unlocks Calendar, and Nansen to glean more insight into these rounds and see whether or not insiders are selling their tokens.
Along with unlocks, many tokens also face structural sell pressure from yield farmers. Even during this bear market, many protocols currently have active liquidity mining programs in which they are using their native token for incentives.
Further, many protocols have recently pivoted to inflation based ve-token models. These models see native token emissions increase in order to incentivize liquidity to various pools and venues.
Regardless of the distribution mechanism, these inflationary programs place downward pressure on price as farmers realize their returns through the sale of these tokens.
The selling from both unlocks and inflation increases the likelihood of a token continuing to lose value throughout a bear market. But as we’ll see shortly, this selling pressure can also decapitalize a protocol and decrease the likelihood that it will survive a long winter.
Warning Sign #2: Native Token Treasuries
Another sign that a project may struggle to survive a bear market is the lack of a diversified treasury.
Per DeepDAO, DAO treasuries hold more than ~$8.1B in liquid and vesting assets. Of this, just $1.0B (12.3%) is in USD-pegged stablecoins like USDC, USDT, DAI, FEI, and FRAX. An additional $391.8M (4.8%) is in crypto-reserve assets such as ETH.
This data indicates a few things. First, it shows that many protocols are poorly capitalized, and lack the requisite funding needed to survive through an extended bear market. This lack of diversification also confirms that many DAO treasuries are highly concentrated in a protocol’s native token.
This presents a problem as it ties a protocol's ability to sustain itself to the value of its token, which poses issues when the market is bearish and prices are falling; as they are right now. 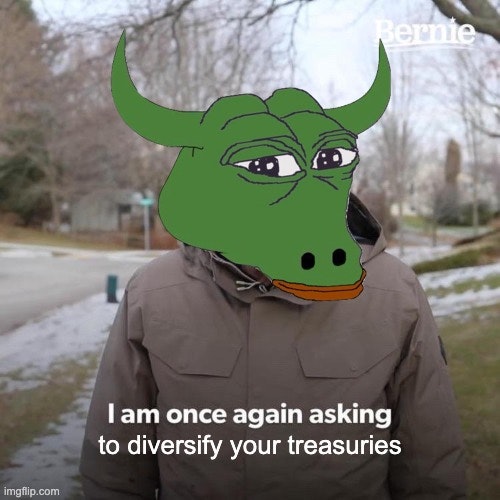 Further, it suggests that to pay contributors and cover other operational expenses, DAOs may be forced to sell their own tokens at depressed prices into increasingly illiquid markets. This not only exacerbates sell pressure on their respective tokens and further depletes the value of the treasuries, but likely causes strife within protocol communities, as selling tokens is deeply unpopular among tokenholders. This can further dampen morale and make life more difficult for all stakeholders.
The lack of a diversified treasury may force protocols to turn to alternative forms of raising capital. For instance, to acquire enough funding to survive, a DAO may be forced to turn to an OTC-deal in which it would sell locked tokens at discount to VCs or trading firms.
These deals are highly unlikely to be favorable to the protocol, as it has little leverage to negotiate favorable terms on behalf of tokenholders. While DAOs may soon have more financing tools at their disposal, such as the ability to do bond and debt offerings through protocols like Porter Finance and Debt DAO, this infrastructure is still in its infancy and presents new risks and obligations that many protocols may be ill-equipped to handle.
Although centralized companies working on the development of protocols, such as Uniswap Labs, may have requisite funding, investors and tokenholders have no way of knowing this for certain as their financial position is almost never disclosed to the public.
Investors would be wise to look at the composition of these treasuries in the hopes of avoiding projects who are overallocated to their native token.
Warning Sign #3: Bad Governance Practices 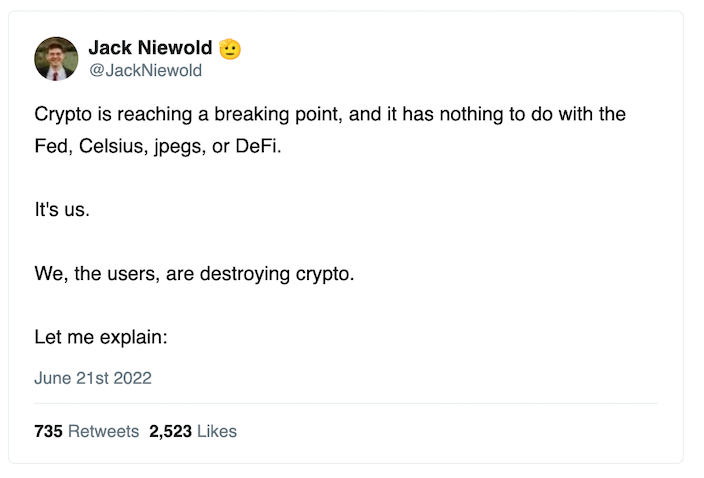 Unfortunately, at this still-nascent stage of the game, DAO governance is largely a mess across the board. That said, there are some warning signs of particularly bad governance practices of which investors should remain aware.
During a bear market, tensions are elevated, stakes are high, and trust is scarce. Governance can make or break a project. The decisions made through governance — and the manner in which those decisions are executed — can have massive ramifications for a protocol's long-term health and legitimacy.
As DAOs are still in their infancy, the industry has yet to converge around best governance practices and organizational structures. This, along with the proliferation of token holder voting — a practice that can easily lead to governance capture and a prioritization towards short-term value maximization — has contributed to many DAOs falling on either extreme of the decentralization spectrum in that they are too centralized or too decentralized.
On one end, some DAOs find themselves in a position in which they are too decentralized. While highly concentrated power causes problems, a complete lack of hierarchy brings with it issues of its own for a DAO. Overly-decentralized DAOs are highly inefficient, leaving them unable to make quick and timely decisions. Furthermore, these organizations may find themselves plagued with infighting and power struggles, leaving them unable to execute on a roadmaps.
On the other hand, many DAOs are DINO: Decentralized in name only. While claiming to be a DAO, these organizations have multiple factors that contribute to them being highly centralized. For example, many DINO DAO’s have a high concentration of token supply amongst insiders, with investors and team members having outsized allocations.
Often, these team members are the only entities able to implement proposals, enabling insiders in these “DAOs” to ignore or entirely bypass their stated governance process entirely and conduct “governance theater” in order to pursue their own ends.
We’ve seen several examples of behavior along these lines in the past week alone.
For instance, Bancor, a decentralized exchange, decided to unilaterally pause impermanent loss protection, a key component of its value proposition of providing liquidity on the DEX This was done without going through governance or by giving protocol participants advanced notice. 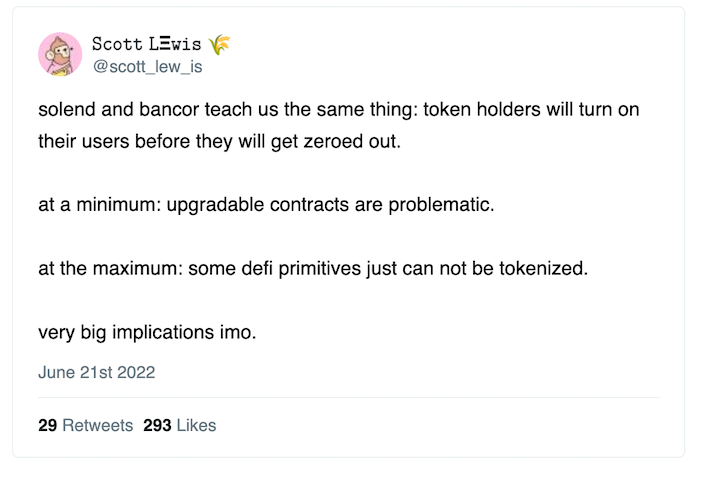 Another example of a governance failure involves Solend, a money market that spun up its on-chain voting system only to then immediately propose confiscating the funds of a large whale who was in danger of having a massive position liquidated. While the whale’s position posed a potential threat to the stability of the platform, and the team has since walked back pursuing that line of action, Solend, along with Bancor, have likely significantly damaged trust among their users and community.
Investors would be wise to avoid protocols that have shown an inclination towards disregarding governance, and those note making a clear and concerted effort towards identifying and following best practices.
Conclusion
To find the next bear market winners, investors must not only know what to look for, but also be able to identify warning signs that indicate that a project is one to avoid.
These include tokens with large supply overhangs that will be continually punished from structural sell pressure from insiders and yield farmers, DAOs with native-token heavy treasuries, as well as protocols that are exhibiting poor governance practices.
Bear markets are opportunity markets. Will you seize the opportunity?
Action steps

Author Bio
Ben Giove is an analyst for Bankless. He’s the former President of Chapman Crypto and an analyst for the Blockchain Education Network (BEN) Crypto Fund, a student-managed crypto fund built on Set Protocol. He’s also a proud member of the Bankless DAO and methodologist behind the GMI index.
The Ultimate Guide to GMI
Everything you need to know about the new DeFi 2.0 index
email.mg1.substack.com
No comments yetBe the first to add your insight!