Jennifer@jennymanydotsAugust 2
$23.6m follower assets
Trigon Metals - A Copper Conundrum
Did I sell? Not yet. I may even BTD...

It's rare that a junior miner checks all the boxes for me, but I felt like Trigon Metals did just that:
JURISDICTION
Fully permitted and in active development, Trigon’s projects are based in mining-friendly Namibia and business-friendly Morocco. Both are stable countries with great infrastructure and capable local workforces.
Namibia ranked as the second most favourable mining jurisdiction in Africa on the Fraser Institute Survey of Mining Companies Report, a significant improvement from its ranking of fifth position in 2020
_Morocco had the highest Policy Perception Index (PPI score) and ranked first in Africa.
_
MANAGEMENT
Trigon’s management combines an unique blend of expertise in the resource sector and capital markets, with a great track record of successful exploration, development and production.
JED RICHARDSON
PRESIDENT, CEO AND DIRECTOR
Mr. Richardson is a qualified mine engineer with a background that includes mine finance and resource development over a 20-year career. As CEO of Great Quest, a fertilizer resource developer active in Mali, West Africa, he gained valuable experience operating and creating shareholder value in Africa. He has also held an executive position at Amazon Mining developing resource assets in Brazil. Mr. Richardson spent a large portion of his career in capital markets working as a research analyst at Sprott Securities and RBC Capital Markets. He also worked as a Mining Engineer for Alcan Aluminum after graduating from the University of Toronto. Mr. Richardson holds a B.A.Sc in Mineral and Geological Engineering.
LARISA SPROTT
DIRECTOR
Ms. Sprott is the President of Sprott Money, an online retailer of gold, silver and platinum bullion to investors and collectors, founded by her father celebrated resource investor Eric Sprott. Prior, she worked as an investment advisor with Sprott Asset Management. Her work history includes experience in Public Relations with Toronto-based firm DKPR. Amongst a list of charitable work, she sits on the Board of Directors of the Sprott Foundation.
FANIE MÜLLER
VP, OPERATIONS AND COUNTRY MANAGER
Mr. Müller is a professional mining engineer registered with the Engineering Council of South Africa. Mr. Müller has a wide range of commodity experience with a strong focus on development to production stage assets. Mr. Müller started his career in the production environment, before also gaining experience in the technical and management divisions of operating mines. Mr. Müller gained experience on a variety of commodities as a mining consultant before mainly focusing on operational start-ups. In addition to a Mine Manager’s Certificate, Mr. Müller holds a Bachelor of Engineering (Mining) and a Master of Engineering (Project Management) from the University of Pretoria.
INSIDE OWNERSHIP

EXPLORATION UPSIDE
Silver Hill is located in an emerging copper and silver mining district in the Anti-Atlas region of Morocco, highlighted by ancient workings. 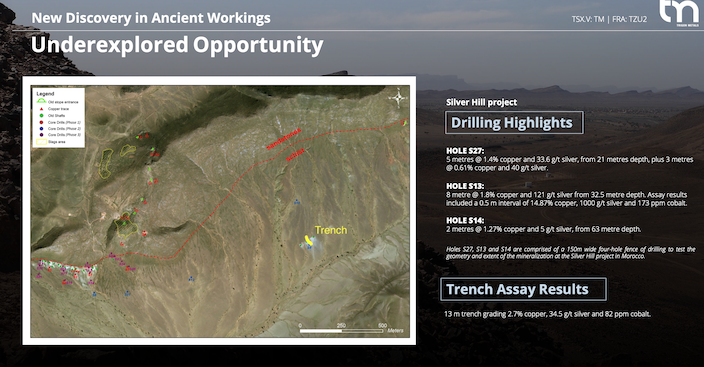 At Kombat, Trigon is taking a fresh look a major copper system in the Otavi Mountainlands. 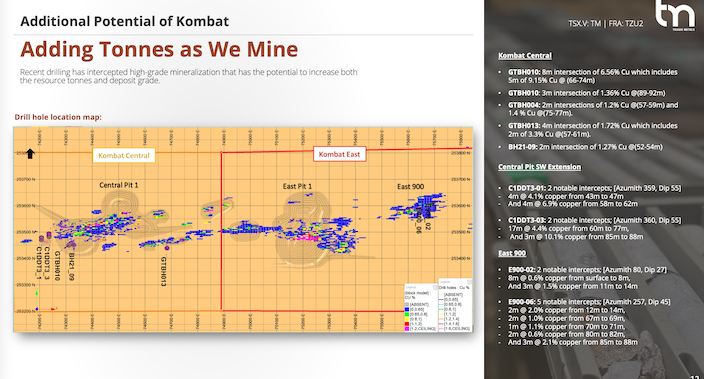 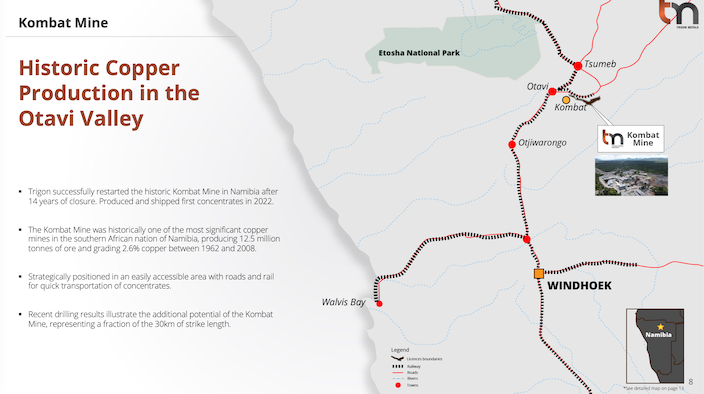 LOM (Life of Mine) 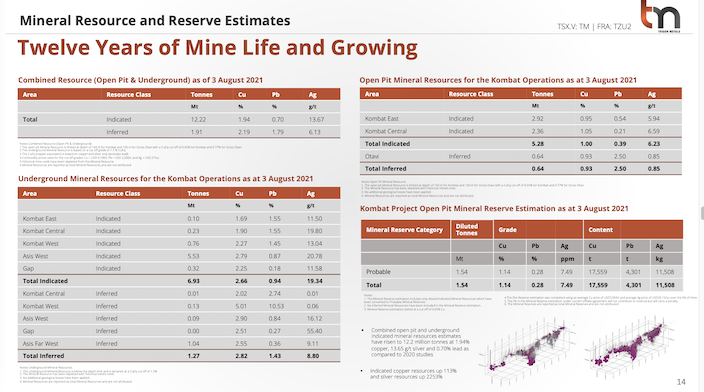 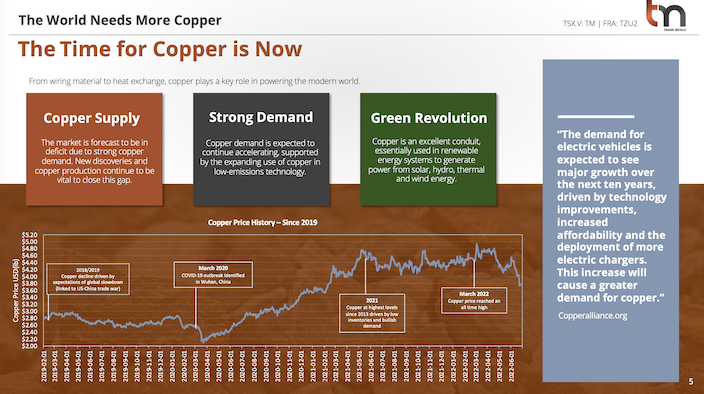 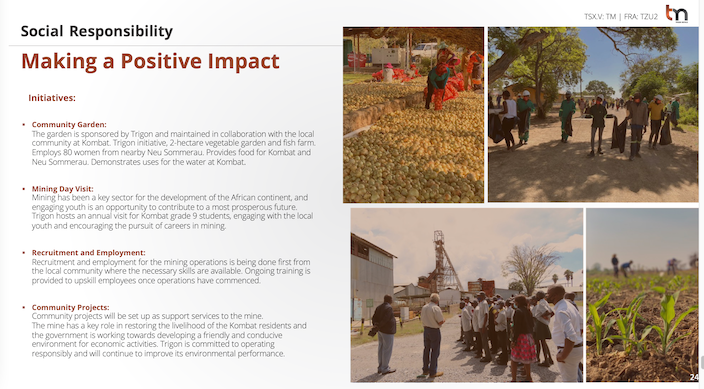 FUNDING
On July 20, 2022, Trigon announced a US$27.5M silver streaming term sheet with Sprott Streaming.
Pursuant to the Transaction, Trigon shall sell and deliver to Sprott 100% of silver produced from the Kombat Mine. The expansion of the Kombat Mine is projected to increase annual copper production and reduce forecasted operating costs. Proceeds will be used to complete ongoing works to dewater the mine, re-establish services, and continue exploration drill work, as well as to deliver a National Instrument 43-101 Compliant Feasibility Study for underground mining and for general corporate and working capital purposes.
https://www.trigonmetals.com/2022/07/20/trigon-announces-us27-5-million-silver-streaming-term-sheet-with-sprott-streaming/
So if Trigon checked all the boxes for me, why the concern now? 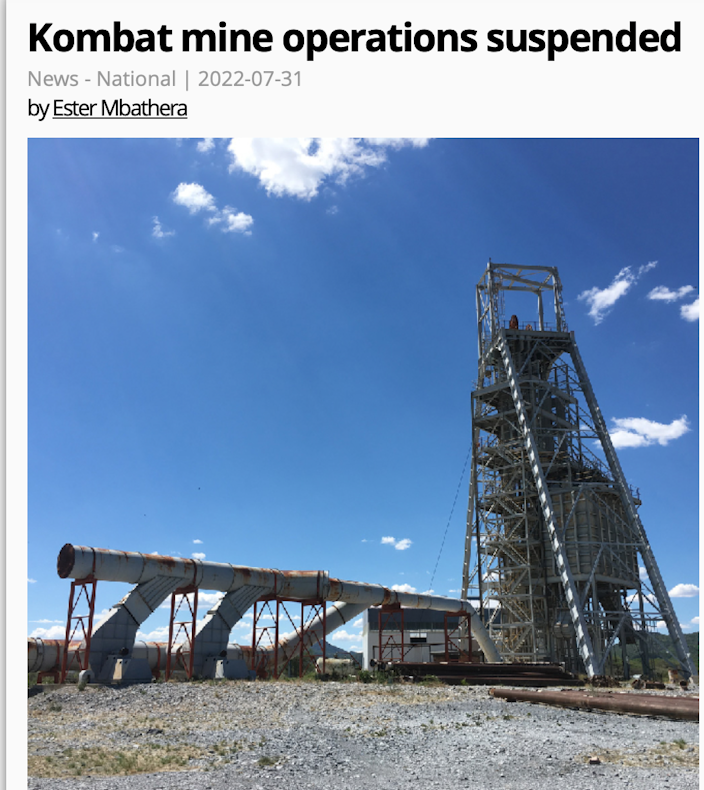 On July 31, The Nambian published an article stating that:
Trigon Mining is suspending its mining operations at its mine at Kombat, citing changes in global economic conditions which have affected copper prices.
Trigon believes the current pricing represents a temporary dip in the market, and that the price will recover to levels sufficient to support Kombat's operations in the coming months.
It also says operations are expected to resume if conditions allow the company to competitively return to the market.
This was followed up by an article on August 1 in the New Era Live, providing further details:
Over 200 workers of the Kombat copper mine in the Otjozodjupa region near Otavi have been ‘retrenched’, as the mine is allegedly expected to immediately
cease operations.
Community members who spoke to New Era, also on condition of anonymity, said the reason for the mine’s abrupt ceasing of operations is because some residents who occupy houses where new mining activity is supposed to start, refuse to move.
“So far, two houses have been bulldozed, but the rest of the people refuse to budge,” a resident said. The people speculate that the company will now mine underground, and therefore would need fewer workers.
On August 2, Trigon issued a press release:
...announcing revisions to its mine plan based on new information from mining the Kavango Open Pit. As planned, initial mining has begun in the area of the Kavango Pit. Management has noted marked improvements on grade control and recoveries, and are pausing operations to focus the mine plan on this type of mineralization to reduce mine wide operating costs at its Kombat Mine in Namibia.
The revised mining plan should dramatically improve operating costs at the mine. The move to take advantage of the higher grade and more consistent Kavango and Kombat trend mineralization should take operating costs down to $2.60-$2.80/lb of copper, from the $3.30-$3.50/lb forecasts from the original mining plan.
I was quite concerned initially by the two articles in the African media and planned to trim my position by quite a bit on the opening (currently 3% of my portfolio). Events like this are always an excellent wake-up call to reassess a position and determine your conviction level. I attempt to stay on top of all news releases and articles related to my investments, and this is a perfect example as to why. Thankfully management issued the press release prior to my placing a sell order, and given the recent decline in copper prices it makes sense to pause & improve the economics of the mine. It's understandable that retrenched workers are upset, but Kombat still offers significant upside.
As I write this post, Trigon's share price is down ~5% which is in line with several other copper equities today, proving that the market isn't all that concerned about the situation in Namibia either. I have decided to hold and may even BTD - because Trigon could prove to be a treasure.
Please DYODD, I am always happy to answer any questions I can.
https://neweralive.na/posts/kombat-mine-shafts-200-workers?fbclid=IwAR1X-IeZNQJgpJHQdGe2zjqkm6Gk2rppUCPfFJIskhEJ3P0ynYa1fEDSNq4
https://www.namibian.com.na/114730/read/Kombat-mine-operations-suspended
https://www.trigonmetals.com/2022/08/02/trigon-revises-mine-plan-to-optimize-production-based-on-new-information-from-kavango-pit-mining-namibia/
www.trigonmetals.com
No comments yetBe the first to add your insight!