Nathan Worden@nathanworden09/07/2021
$334.1m follower assets
Solana's Optimizations and Tradeoffs
On June 9th Solana announced that it had raised $314 million in a private token sale round led by Andreessen Horowitz and Polychain Capital. Since that date, Solana is up ~360% as its market cap has gone from $11B to $52B.
What properties does Solana have that the market is loving right now? And more importantly, what tradeoffs is it making in order to achieve those?
The scalability trilemma says that there are three properties that a blockchain tries to have, and that, if you stick to "simple" techniques, you can only get two of those three: 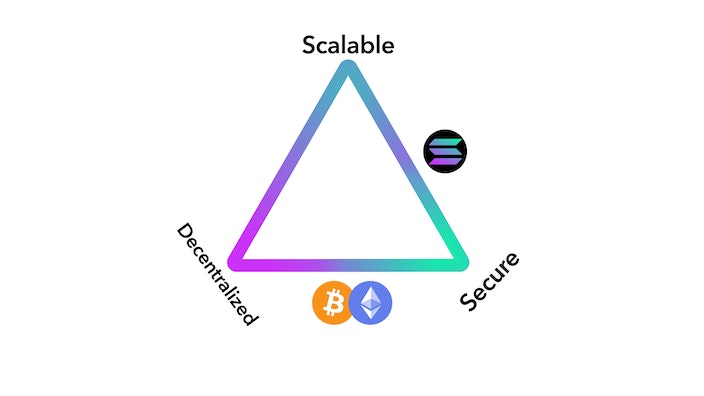 Bitcoin and Ethereum have chosen to optimize for Decentralization and Security, which has allowed each find their own niche:
Bitcoin: Store of value
Ethereum: Ultrasound internet money
Ethereum would like to become more scalable in order to expand its potential use cases, and plans to do so when it upgrades to Proof-of-Stake sometime in 2022. Bitcoin on the other hand already has almost a $1 Trillion market cap and doesn't need to evolve much more in order to be a global settlement layer. Both take decentralization very seriously.
But 'decentralization' has a lot of nuance; and this is where Solana teases apart what decentralization is supposed to achieve and makes some judgements based on what 'decentralized' parts it finds essential, and what it is happy to leave behind.
Decentralization is typically interpreted to mean that your node should not rely on trusting any of the other nodes in the network. For Bitcoin and Ethereum this means that your node can verify the full objective history of the chain going back to the beginning without relying on information from any other node.
Bitcoin and Ethereum care a lot about this. They're religious about the need to be able to verify independently that the chain was consistent from its root point at day zero, and that there were no invalid state transitions and nobody fiddled with the amount of $ETH.X or $BTC.X in existence.
$SOL.X in contrast, merely wants to have the most censorship resistant messaging network. Instead of insisting on a full, independently verifiable history (which adds a lot of baggage and slows things down), Solana claims that finding a way to share time when nodes cannot rely upon one-another is the key ingredient.
To that end, Solana is happy to uses Delegated Proof-of-Stake as it's consensus mechanism and leave Proof-of-Work behind.
Solana's Delegated Proof-of-Stake implementation relies on a semi-centralized structure in which a node leader is elected and all nodes agree to adopt one universal source of time.
That universal source of time is archived through 'Proof-of-History' which is "the implementation of the arrow of time in math" according to founder Anatoly Yakovenko.
Proof of History is what allows Solana to verifiably order transactions without all nodes needing to agree simultaneously.
The tradeoff enables Solana to process 65,000 transactions per second whereas Bitcoin can handle about 7 transactions per second, and Ethereum can handle 30 transactions per second.
I'll leave the community with some open questions to discuss:
twitter.com

T◎m@tdozzi09/07/2021
I actually had a great chat about this in a discord for an NFT I just bought. Was essentially chatting with the commissioner and we agreed on this breakdown
$BTC.X BTC: the digital gold standard
$ETH.X : Transaction currency for whales and institutions
$SOL.X : transaction currency for everyday people

I minted an ETH NFT the other day and for me, the gas was crazy, but for a whale it was nothing. When I mint a SOL NFT it was a much cleaner user experience for me

Nathan Worden@nathanworden09/07/2021
Author
So the question becomes- if gas fees keep everyday people from using Ethereum, but Solana provides a great experience for everyone, why wouldn't whales and institutions start to migrate over to Solana?

Leeor@leeor09/08/2021
@nathanworden I agree that there is a real chance of this occurring. That being said, still a much stronger ETH developer community, so Solana can’t just continue to be better -> it has to be an order of magnitude better over the next 1-3 years

Nathan Worden@nathanworden09/08/2021
Author
@leeor that’s a great point- and ETH 2 just makes it even harder to stay an order of magnitude better.

Gaurav Mishra@gmishra09/08/2021
@nathanworden @leeor If you’ll be active around the community! You’ll realize it’s not a small community, just folks are not as old as Eth community! Which is kinda great as the new blood would bring in new innovation.
This is classic new entrant vs incumbent question and all would depend on how quickly Eth2 actual becomes a reality. Given the history of Eth folks, it’s gonna take some time.

T◎m@tdozzi09/08/2021
@nathanworden that’s a good question, and I think ETH 2.0 presents some problems, but who knows when exactly it will be released.
I personally have been involved in solana community and I think a lot of great projects are being made. They also have the ignition hackathon coming up soon which could really showcase its power.

Nathan Worden@nathanworden09/08/2021
Author
Would you mind sharing the link to the discord where you hang with the Solana community @tdozzi?

Nathan Worden@nathanworden09/08/2021
Author
Actually, I think I found it on the website, is it this one? @tdozzi: https://discord.gg/solana

T◎m@tdozzi09/08/2021
@grant I’ve been following solanauts pretty closely. The commish is really active within the discord community and they are only minting 500 (7 sol per) which is low. Here is link to discord: https://discord.gg/DR7946xp

Gaurav Mishra@gmishra09/08/2021
@nathanworden You’re able to join their discord? It’s been not working for me.

Nathan Worden@nathanworden09/08/2021
Author
Yep, the link on their website worked for me: https://discord.gg/solana

Nathan Worden@nathanworden09/08/2021
Author
@gmishra The more I look into it, the more activity I'm seeing in the Solana community.
All in all it's bullish for the crypto industry in general- the more progress one community makes (like Solana) the more it motivates the other communities (like Ethereum) to keep getting better.

Aeric John@aeric09/09/2021
Great write up. PoH is just one of 8 innovations Solana has implemented that allows them to make all this work. For the decentralization piece, from what I have gathered, Anatoly is banking on Moore’s law continuing to scale and hardware becoming cheaper and cheaper.
So as time goes on, decentralization will become easier to implement (in theory).
https://link.medium.com/7vjqxMsLojb

Nathan Worden@nathanworden09/09/2021
Author
Thanks @aeric :)
Good point about the other innovations. And that’s an interesting point about Anatoly’s bet.