Nathan Worden@nathanworden08/18/2020
$332.7m follower assets
Ark Innovation ETF - Wright's Law
$ARKK is my first pick as a long term investment for the portfolio I am building for my future kid(s). I just bought two shares a moment ago. Today I'm going to talk a little more about why I think investing in innovation is a good long term bet, and how $ARKK goes about implementing its strategy.
Yesterday I talked about why I generally think innovation is a good idea. But speaking in generalities does not a good investment make. We need to dig further into the mechanics of innovative trends today in order to understand where they might lead us in the future.
First up: Wright's Law. In a nutshell, Wright's Law is the idea that the more you produce of something, the less expensive it is to produce each individual unit of the thing you're making. Its an efficiencies of scale dynamic.
Theodore Wright formalized the idea in the 1920s when he was studying airplane production. He noticed that the cost to produce the 2,000th plane was 15% less than that to produce the 1,000th plane, and the cost to produce the 4,000th plane was another 15% less than that to produce the 2,000th.
Formally, Wright's law states that for every cumulative doubling of units produced, costs will fall by a constant percentage. And it looks like this: 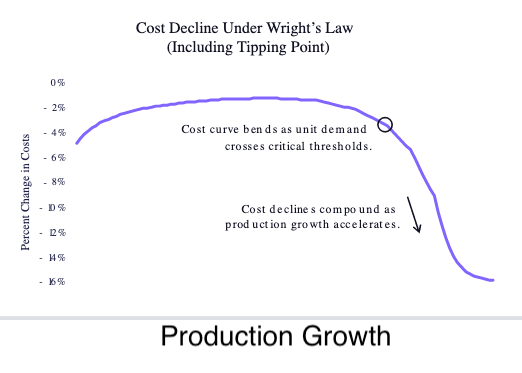 Humans do a really bad job of understanding compounding. Anytime you find a compounding dynamic, there could be an investment opportunity because most people don't intuitively understand them, let alone the second order implications.
In compounding you usually think in terms of how fast things grow; with Wrights law the compounding is in how how fast things shrink. Specifically, the shrinking of the cost decline itself. But the second order market implications are where things get really interesting.
When a good gets less expensive, more people are willing to buy it. This is called "price elasticity of demand" and it basically means that demand goes up as price goes down.
So what happens when you get a good whose price is going down at an accelerating rate? You get a surprisingly high level of demand. And this demand enables further scale of production and further price declines of the product, continuing to create even more demand. Its a virtuous cycle.
In Ark's $ARKK innovation ETF, they look for companies that are starting to hit a 'tipping point' where the cost declines of the product they are making are starting to compound.
There's so much more to talk about as far as the specific companies they are choosing that are near this threshold, but I'll leave that for another day.
No comments yetBe the first to add your insight!