MTS Insights@mtsinsightsSeptember 12
$15.2m follower assets
Manufacturing Weakness in Germany has Implications for Euro Area Growth
The weakening German manufacturing sector will be a major drag on growth in the euro area in the second half of 2022. Data for July suggests that demand destruction and persistent supply chain disruptions caused manufacturers’ orders and industrial production to decline at the start of Q2. Amidst a slowdown in activity is an energy crisis causing electivity prices to surge which is putting pressure on profitability, especially for small- and mid-sized firms.
The German statistical agency, Destatis, updated these two economic data points in the last two days. Industrial production fell -0.3% MoM in July which is slightly deceiving as stronger energy production (up 2.8% MoM) and construction production (up 1.4% MoM) offset a -1.0% MoM decline seen outside of those industries. The strongest decline was seen in consumer good production which fell -2.4% MoM. The July release also highlighted “energy-intensive” industrial production which fell -1.9% MoM in July and is down -6.9% since February 2022.
The next data point, describing a -1.1% MoM decline in manufacturers’ new orders in July, suggests that production is set to fall further in Q3. Sharp declines in domestic (down -4.5% MoM) and euro area (down -6.4% MoM) were partially offset by a 6.5% MoM increase in non-euro area orders. With Europe being Germany’s biggest customer, the looming recession and downgrades in growth expectations suggest firms will see thin order books in Q3 and Q4 as inflation and higher interest rates are destroying demand. The manufacturing sector is the linchpin of the German economy, so weakness there will eventually weaken the employment outlook which will feed into a consumer weakness.
Weak German Industry Means a Weak Europe
The weakness reported in the German industrial sector in the beginning of Q2 2022 should make the rest of Europe worried. The central European country’s production is an important source of economic activity to both the EU and the euro area and is vital to the GDP growth reported each quarter. In 2021, Eurostat reported that 27% of EU industrial production came out of Germany which is 11 ppts more than the second highest industrial producing nation, Italy. Germany produces the most motor vehicles, trailers, and semi-trailers with €160 billion, €196 billion, and €267 billion worth made, respectively. 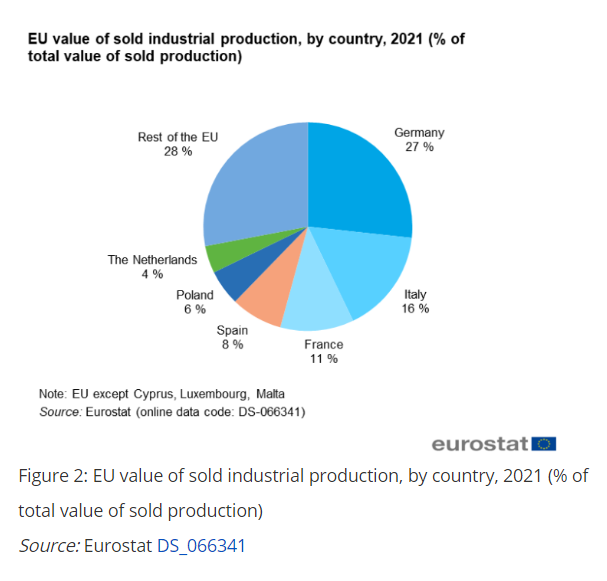 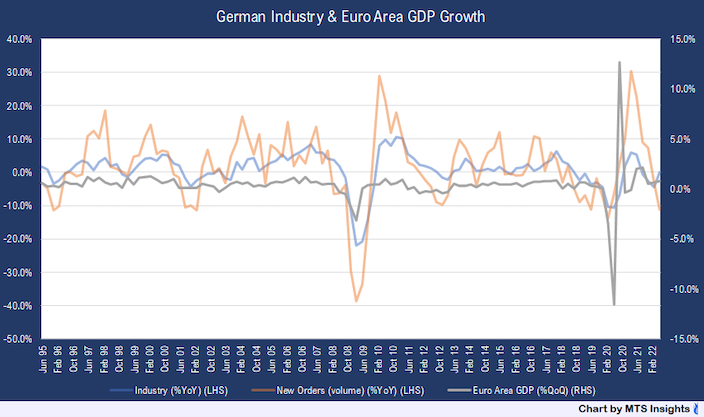 Forecasters have already caught wind of the weight that German industrial weakness will have on growth in the region. The IMF’s World Economic Outlook update in July shaved -0.9 ppts and -1.9 ppts off of the German growth forecast in 2022 and 2023, the largest downgrade out of the developed European economies mentioned in the report. Alongside that downgrade, euro area projections came down -0.1 ppts in 2022 and -1.1 ppts in 2023. The IMF also cites Germany as the G-7 country with the highest probability of falling into a recession (a 25% chance while other G-7 economies are at an estimated 15% chance).
The moral of the story is that Europe rarely evades a recession when its economic powerhouse is weak. Investors and policymakers should be paying very close attention to the data points coming out of Germany tracking the industrial sector. Even if the effects of inflation and supply chain deficiencies may vary by country, all euro area economies will likely face muted economic activity if these effects hinder German industry.
From MTS Insights
Manufacturing Weakness in Germany has Implications for Euro Area Growth - MTS Insights
MTS Insights covers economic and financial reports with a database of free reports accessible to anyone. There is more data available than ever before, get access to it.
www.mtsinsights.com
No comments yetBe the first to add your insight!