Rich Excell@stayvigilantNovember 16
$16.8m follower assets
Chart of the Day - risk management
I walked into the classroom yesterday to find that there was a leak from above. A pipe had burst & made a mess of one classroom but fortunately it was contained in mine. Investment mgmt is very similar to this. You walk in to the day thinking you will do one thing but then find you can't follow your plan because there is some risk that flared up that needs to be managed. As Mike Tyson says, everyone has a plan until they get punched in the face.
The mkts have been punched in the face this year.Yesterday, just when the mkt felt like it was off to the Santa Claus rally, a missile ended up in Poland (NATO) & the mkt sensed the global geopolitical risk still lurking over the mkt.
If we look at various measures of mkt risk in the top chart, we can see that these measures tend to move together. I am looking at the VIX Index (equity implied vol) in purple used by all types of global fund mgrs to hedge. The blue line is the MOVE Index which is a similar measure except for the US Treasury mkt. The orange line measures implied vol for global FX mkts. The yellow line is credit spreads. All are gauging the demand for hedging, the demand for nervousness among investors. Different mkts lead at different times, but the ones that move the most are the ones in the epicenter of risk. For instance, see how the yellow line (credit spreads) stays high from 2012-2016 primarily because there are a lot of energy names in that index & fracking was causing lower prices & higher stress among these firms. In Covid & GFC they all spiked together.
However, now look at the lower chart. It zeroes in on the last 5 yrs. We see a disconnect building. We see the 'macro' mkts such as Treasuries & FX spiking in terms of vol while the 'micro' mkts of the VIX & credit spreads have moved higher but have not spiked.
With credit, you can again posit that it is potentially energy stocks at play. They are big borrowers but now are generating a lot of cash flow & paying down debt. The risk is waning. With the VIX, you could also posit that the negative positioning, high cash levels, big emini short mean investors don't need to flock to the VIX to hedge because the portfolio is bearishly positioned. Investors hedge when they are still in an investment after all.
Another reason is the risks in mkts this year are all macro. They revolve around the extended sovereign debt on balance sheets. On the 130% debt on the US balance sheet. On the dollar wrecking ball that is crushing Europe, Japan & EM. They are about how the debt, not equities, on the balance sheet of pensions led to the LDI rout that forced the BOE to step in, & to risk parity having a top 2 drawdown this century. The epicenter of risk is seeing the biggest spike. We have seen the capitulatory spike & it was in the MOVE. Maybe the VIX won't.
Twain tells us history doesn't repeat but it rhymes. Words to live by.
Stay Vigilant
#markets #investing #riskmanagement 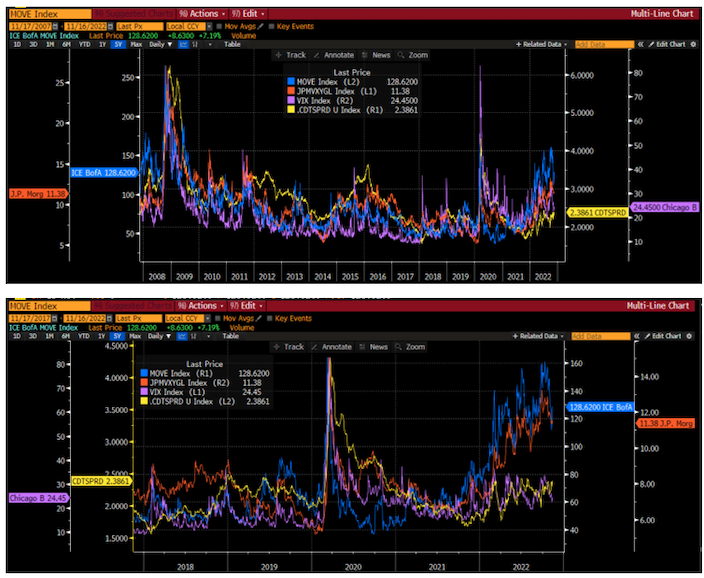