The Science of Hitting@tsoh_investingAugust 4
$35.1m follower assets
Cable's Wireless Moment (Paywall Removed)
After many years of consistently reporting strong broadband customer growth, Comcast and Charter suddenly find themselves in uncharted territory. On Monday, I will publish a write-up that will look at their struggles in Q2 FY22, as well as the success of T-Mobile’s Fixed Wireless Access (FWA) / Home Internet offering, which attracted >500k net new customers in Q2.
Monday’s post will effectively serve as a follow-up to “Cable’s Wireless Moment”, which I published in January 2022. I’m returning to this topic because I believe this is an important moment in the long-term evolution of the connectivity industries; both articles will help you to understand why I’m of that opinion. For that reason, I’ve decided to remove the paywall on “Cable’s Wireless Moment” (reprinted in full below or on the TSOH website).
For complete access to my equity research, including company deep dives (recent examples include Match Group, Chipotle, Five Below, Roblox, and Nike), current holding and watch list updates, investment philosophy discussions, and the disclosure of ALL portfolio changes before they’re implemented, please subscribe to the TSOH Investment Research service.
https://thescienceofhitting.com/p/cables-wireless-moment
Cable's Wireless Moment
In December 2011, SpectrumCo, a JV between Comcast, Time Warner Cable, and Bright House Networks (the latter two are now part of Charter Communications) announced that it had reached an agreement to sell its 122 Advanced Wireless Services (AWS-1) spectrum to Verizon for $3.6 billion. The press release announcing the transaction included the following note:
“The companies also announced that they have entered into several agreements, providing for the sale of various products and services. Through these agreements, the cable companies, on the one hand, and Verizon Wireless, on the other, will become agents to sell one another's products and, over time, the cable companies will have the option of selling Verizon Wireless' service on a wholesale basis. Additionally, the cable companies and Verizon have formed an innovation technology JV for the development of technology to better integrate wireline and wireless products and services.”
For a few years, not much happened (May 2015: “We have the MVNO agreements with Sprint and Verizon, but we don't have anything to announce right now.”). But then, in 2017, Comcast launched Xfinity Mobile. A year later, Charter followed suit with Spectrum Mobile. The cable companies now had their own wireless offerings – with services supported by the mobile virtual network operator (MVNO) agreement announced with Verizon in 2011.
Fast forward to today and we can see that these efforts have started to bear fruit: as of Q3 FY21, Charter and Comcast had 3.2 million and 3.7 million wireless subscribers, respectively. Despite the fact that they only sell to customers within their cable geographies, its estimated that the cable companies have accounted for roughly 30% of wireless industry net adds over the past year. Based on recent trends, Comcast and Charter will each have more than five million wireless subscribers by the end of 2023. (Charter CFO Chris Winfrey: “I think our [wireless] penetration potential on our 30 million Internet customer relationships is very, very high.”)
As wireless has scaled, they’ve also seen an improvement in the economics: as shown below, Comcast’s TTM EBITDA attributable to the Xfinity Mobile business line has consistently improved over the past three years (Q2 2021: “Xfinity Mobile is now a stand-alone, profitable business.”) 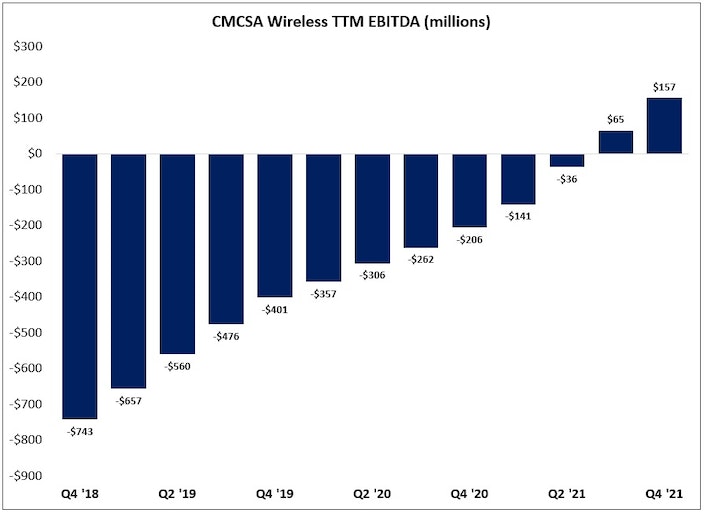 And the cable companies are just getting started. For example, in April 2021, Comcast began offering multi-line discounts ($45 for a single line, $80 for two lines, $100 for three lines, and $120 for four lines). Considering that a significant percentage of mobile connections in the U.S. are sold through family plans with 3+ lines, this was a key improvement that made Comcast’s offering more competitive (“MVNO’s like Comcast and Charter have a line structure that is very heavily one and two lines, and almost nobody has three and four because they’re not competitive”); note that Charter followed suit in October 2021, with multi-line pricing starting at $29.99 per month.

In summary, wireless has been a nice addition for the cable companies; as Comcast CFO Mike Cavanagh said in September, “We can win by improving lifetime customer profitability through lower churn and by having a stand-alone profit for the wireless business.” As their customer base grows, they are also making incremental investments to support the wireless business (most notably CBRS spectrum purchases); as Charter CEO Tom Rutledge noted in Q4 2020, “Over the long haul, meaning 4 - 5 years, we could [offload] up to one-third of our traffic.” Since the MVNO agreement is based on average prices, Comcast and Charter can selectively invest to offload traffic when they’re offered attractive ROI’s (leaving Verizon with the remainder).
And as we think about the long-term structure of the connectivity industries in the U.S., I think these developments could have a meaningful impact on how cable companies and telcos view their relative positions in the market. (John Malone in November 2019: “In Europe, in my other life at Liberty Global, we followed a strategy of believing that the consolidation of wired and wireless networks created enormous synergy, convenience for the consumer, all kind of good things. Our strategy there was to do MVNO’s initially, resell other people’s service, until we got scale; once we had scale, we were able to calculate pretty carefully the economics of us acquiring one of the other networks… We found those synergies to be real and very substantial. So, in the U.S., the strategy for Charter would be to continue to grow based on the MVNO, not make a huge capital intensive bet yet, until we really understand the economics of the combination… At the point we get material [scale], we would be in a better position to answer that question about buying or building our own network. At the moment, I don’t think [Charter and Comcast] are far enough along that path… But there will be a point when we will have enough volume / scale / traffic to make an intelligent decision about building some of our own network so that the MVNO is more cost effective... there will be a hybrid transition over time… It’s a learning curve, but as the cable industry understands that relationship, there will be a coming together… It might be JV’s, it might be mergers, but there will be a coming together because the economics will drive it there.”)
Conclusion
For the telcos, it’s difficult for me to see these developments as anything but a net negative (even for Verizon, but at least they’re generating some wholesale revenues through the MVNO – “it's more attractive to be the wholesale provider, rather than just simply losing customers to that new entrant”). Cable companies are taking a lot of market share in wireless, and competitive dynamics will likely have an impact on industry ARPU’s. Both of those developments are bad for the big three (AT&T, T-Mobile, and Verizon).
For Comcast and Charter, this is proving to be an important short-term and long-term win. In the short-term, wireless is an avenue for improved customer LTV’s (through a stickier customer base and lower broadband churn), and possibly attractive standalone economics (Liberty Broadband CEO Greg Maffei: “I think this will be a $1 billion EBITDA business within four years”).
Over the long run, as cable adds millions of wireless customers, this will become a key asset in the face of industry convergence; it’s a defensive and offensive move that helps to protect cable’s moat. And if convergence presents the opportunity / need for consolidation (M&A), I think this will greatly improves the cable companies negotiating position with the telcos.
NOTE - This is not investment advice. Do your own due diligence. I make no representation, warranty or undertaking, express or implied, as to the accuracy, reliability, completeness, or reasonableness of the information contained in this report. Any assumptions, opinions and estimates expressed in this report constitute my judgment as of the date thereof and is subject to change without notice. Any projections contained in the report are based on a number of assumptions as to market conditions. There is no guarantee that projected outcomes will be achieved. The TSOH Investment Research Service is not acting as your financial advisor or in any fiduciary capacity.
https://thescienceofhitting.com/p/cables-wireless-moment
Cable's Wireless Moment
In December 2011, SpectrumCo, a JV between Comcast, Time Warner Cable, and Bright House Networks (the latter two are now part of Charter Communications) announced that it had reached an agreement to ...
thescienceofhitting.com
No comments yetBe the first to add your insight!