Pete Nikolai@levmoinvestingJuly 29
$25.1m follower assets
📈 Do you have a backtested algorithm so you know when to invest aggressively--and when not to?
The second of three obvious speed bumps we experienced during the 2009-2021 bull market happened during July 2015-February 2016 when a series of events created uncertainty and market turbulence for several months.
The events included the end of a phase of quantitative easing by the U.S. Federal Reserve, slower than expected GDP growth in China, a substantial decline of the Chinese stock market, the devaluation of China’s currency, a substantial fall in petroleum prices, the Greek debt default, a sharp rise in bond yields, and the announcement that the UK would hold a referendum on whether to remain in the European Union (which eventually led to their infamous Brexit). 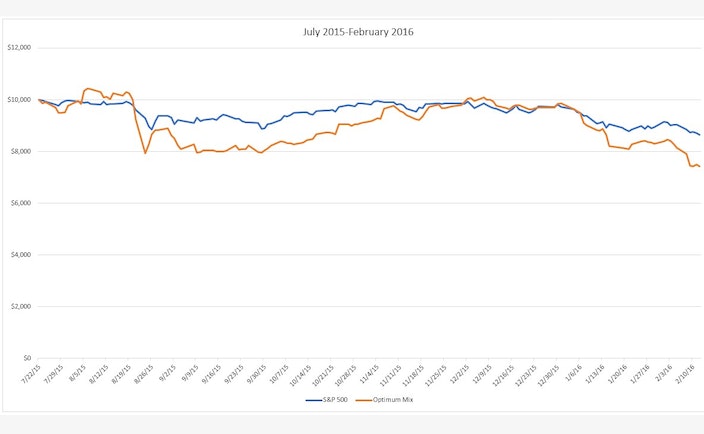 This chart compares the loss in value of $10,000 invested in the S&P 500 from July 22, 2015, through February 12, 2016, with the loss in value of $10,000 invested using the Optimum Mix during that same period.
The market as represented by the S&P 500 struggled to gain a foothold and was down nearly 14% during the eight months from July 2015 through February 2016.
The Optimum Mix fell 25.4% during the July 2015-February 2016 period as it continued to invest in high-momentum large cap stocks while also switching a portion of the portfolio from leveraged equity ETFs to a leveraged bond ETF as directed by the black swan event indicator.
The Optimum Mix then switched that portion from the leveraged bond ETF back into leveraged equity ETFs after the end of the black swan event which helped it recover quickly and go on to substantially outperform the market in the months following the turbulence.
The strategic takeaway for this period and other speed bumps, corrections, and bear markets is to “cover your assets.”
The time to develop an action plan for the inevitable temporary setbacks is before they begin.
We must learn from the past to prepare for the future.
Any questions or feedback?
$UPRO $TQQQ $FNGU $MA $HD $NKE
No comments yetBe the first to add your insight!