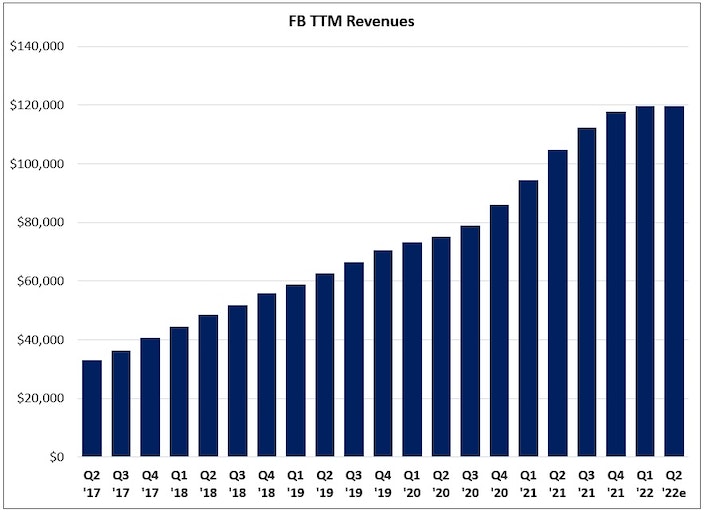 Financials
In the first quarter, as a result of outsized expense growth (+31% YoY), Meta’s operating income declined by ~25% to ~$8.5 billion, with EBIT margins contracting ~1,200 basis points. One line item that stood out to me from the P&L was R&D: at ~$7.7 billion in Q1, run rate expenses now exceed $30 billion, or larger than Meta’s total revenue base five years ago ($27.6 billion in FY16). As that suggests, Meta has exhibited a pace of expense growth over the past few years that is proving unsustainable given the realities that they’re currently facing. (As I noted earlier, Zuck effectively admitted that point in his opening remarks on the Q1 conference call.) 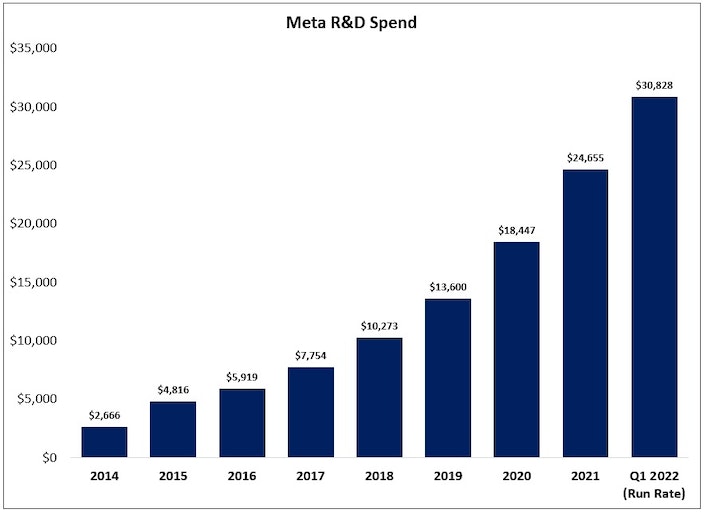 It’s early days, but that conclusion is starting to have an impact on the financials: management now expects FY22 total expenses of $87-$92 billion, or roughly $5 billion less than initial expectations (first guide in Q3 FY21).
As CFO Dave Wehner noted on the call, management is focused on “ensuring our investment plans are appropriately calibrated to the operating environment”. While the updated guidance still implies 26% YoY growth in FY22, that would be the lowest pace of incremental expenses (%) in its history (and if previous years are any indication, we’re likely to see further downward revisions on the expense guide in the coming quarters). 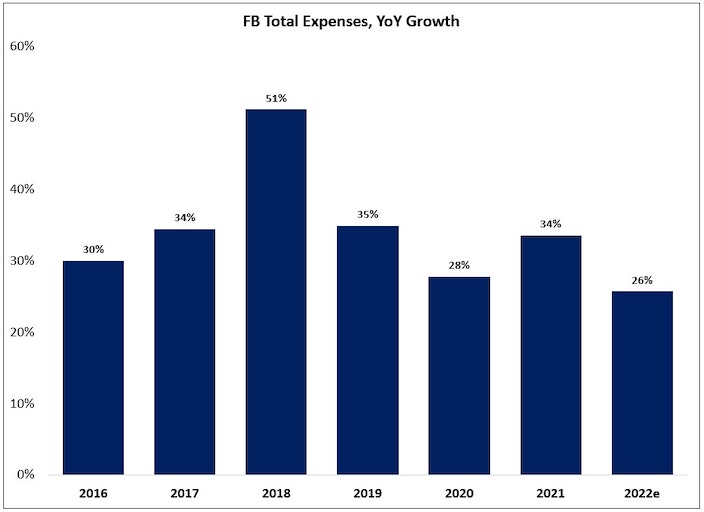 Another notable change at Meta has been a much larger focus on share repurchases; as shown below, the company repurchased ~$50 billion of stock over the past year, which is roughly 5x – 10x higher than the level of spend that shareholders had come to expect in the years preceding FY21 (and a as a result, the diluted share count declined ~5% YoY in Q1). 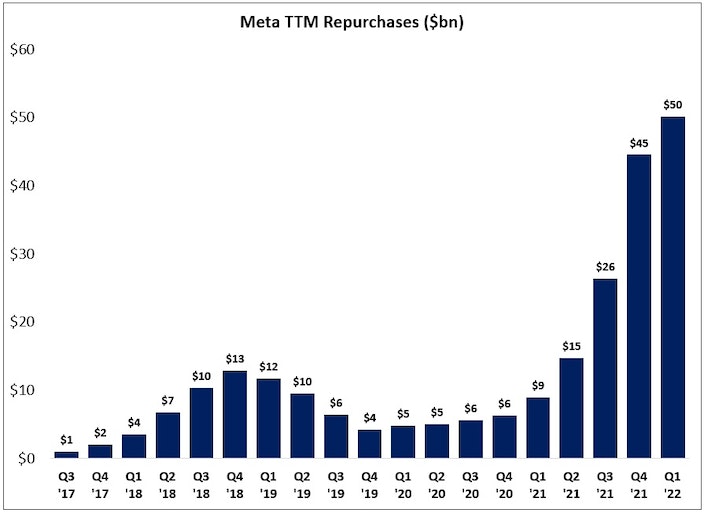 The company’s financial position remains incredibly conservative / strong, with ~$50 billion in net cash & investments on the balance sheet, alongside a business that continues to generate tens of billions of dollars in annual free cash flow even in the face of a massive CapEx ramp (in Q1, FCF was +9% to ~$8.5 billion). While the company remains unlikely to pursue large inorganic opportunities (I’m doubtful regulators in the U.S. and Europe would allow it), they have significant financial flexibility to pursue other avenues, like share repurchases, that can be additive to long-term per share intrinsic value. 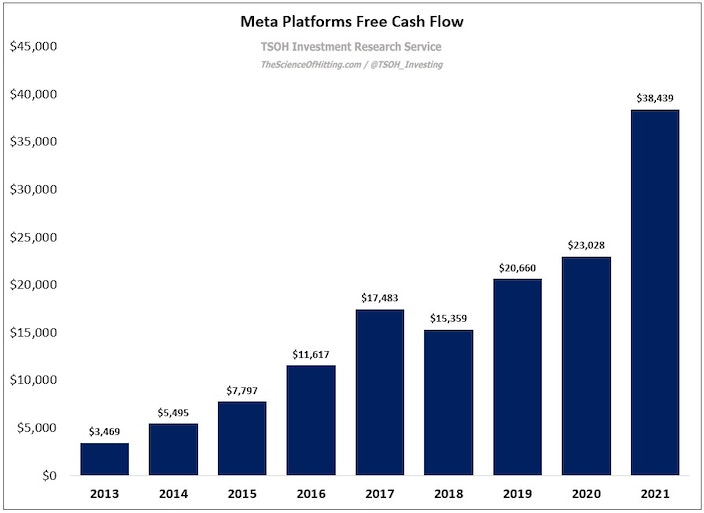 Conclusion
In light of the weak FoA results, at least relative to historic expectations, the market’s positive reaction to the print is revealing. The results in the core business managed to hold up fairly well in the face of significant short-term headwinds, with reason to believe that some of these pressures will start to abate in the back half of FY22. In addition, the commentary around FRL provided investors with incremental confidence that Meta will be thoughtful about the short-term financial implications of its decisions as they pursue additional long-term growth opportunities (I’d also note that the release of a web version of Horizon later this year will be a useful near term test for FRL).
While challenges remain, I’m encouraged by the continued FoA user base growth (Family DAP’s up 6% YoY to 2.87 billion), as well as the positive commentary on user activity (“engagement for both Facebook and Instagram remain above pre-pandemic levels; that's true globally and in the U.S.”).
The disclosures on Reels and other product evolutions, like AI-driven recommendations in the feed alongside social content, also indicate that the company remains focused on key objectives in FoA. Finally, in light of the well published issues / concerns around engagement, measurement / attribution, and mix shift to less effective formats (Reels), it’s worth noting that ARPU in the U.S. and Canada increased YoY in Q1 FY22 (albeit marginally). 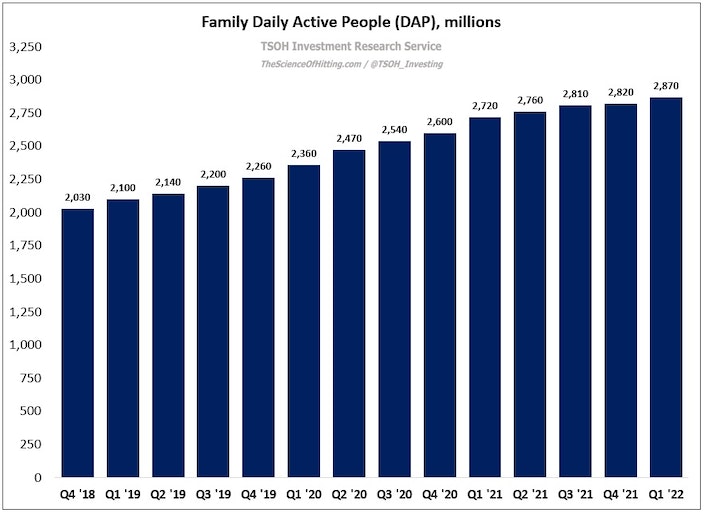 I don’t want to suggest this is all roses; the ~50% YTD decline for the stock at its April lows is indicative of real short-term headwinds, and work remains on key strategic initiatives (for example, while Meta has seen traction with its Click-to-Messaging ads, on platform commerce / Shops has struggled). That said, I remain confident in management’s ability to navigate these issues over the long run. For that reason, I will leave my FB position unchanged for now.
NOTE - This is not investment advice. Do your own due diligence. I make no representation, warranty or undertaking, express or implied, as to the accuracy, reliability, completeness, or reasonableness of the information contained in this report. Any assumptions, opinions and estimates expressed in this report constitute my judgment as of the date thereof and is subject to change without notice. Any projections contained in the report are based on a number of assumptions as to market conditions. There is no guarantee that projected outcomes will be achieved. The TSOH Investment Research Service is not acting as your financial advisor or in any fiduciary capacity.

StockOpine@stockopine5d
Great work and thanks for sharing.
Really liked the below quote 👇
“Over the next several years our goal from a financial perspective is to generate sufficient operating income growth from FoA to fund the growth of investments in FRL while still growing our overall profitability”

Rihard Jarc@rihardjarc5d
Appreciate you opening it up also for non paying subs:)

The Science of Hitting@tsoh_investing1d
Author
@rihardjarc Glad to hear it Rihard! Have a good one.

Benjamin Buchanan@01core_ben5d
Idk, those charts all look like a company that's fast going out of business to me, especially the revenues and free cash flow.

Neil@couch_investor4d
Thank you for sharing!

The Science of Hitting@tsoh_investing1d
Author
@couch_investor No problem Neil, thanks for reading!