Porchester ✳️@porchesterJanuary 15
$4.4m follower assets
Giving Your Portfolio the Royalty Treatment
How to Add Song Royalties to Your Investment Portfolio & a Lesson in Always Doing Your Research 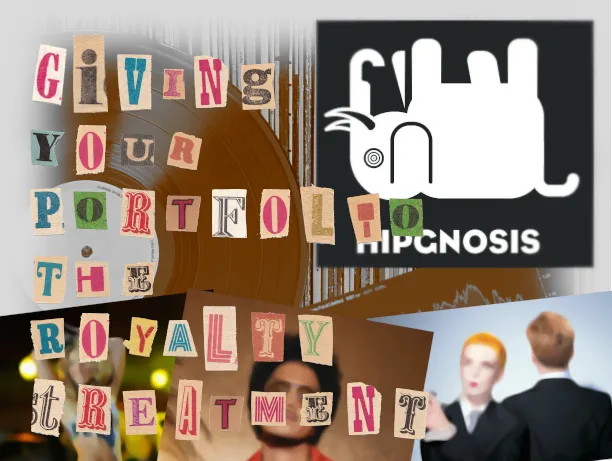 Those who know me personally know that many years ago before I ever got started in finance I was a DJ. In my student days, I used to play gigs five nights a week. I can tell you fitting in that much DJing and a full-time Mathematics course was intense and certainly not something I can imagine doing now as a 30-year-old! 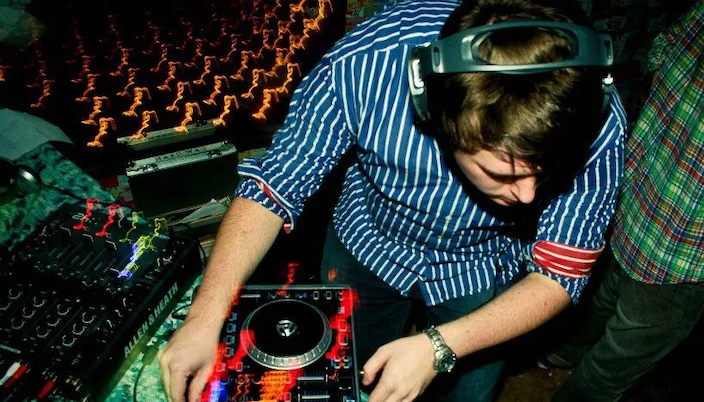 When the song is either physically copied, performed, streamed or played in a bar etc then a royalty payment is made to those holding the Composition rights.
When the original recording is downloaded, bought or streamed then a royalty is paid to those holding the Recording rights.
Although physical sales of music have fallen dramatically over the last 20 years, streaming has become the principal way for consumers to get access to the music they like. As people stream music on platforms such as Spotify, the holders of the rights are subsequently paid royalties. 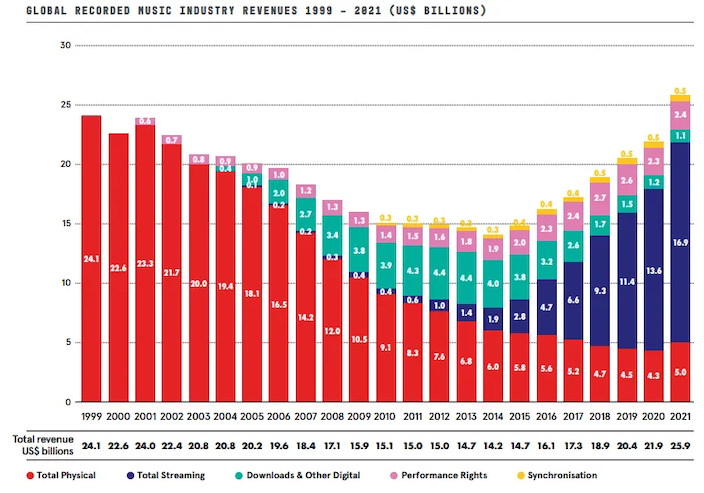 Global Music Industry Revenues Source: IFPI
Streaming services such as Spotify are seeing continued user growth. Services offered by these platforms are increasingly good value for money for consumers offering huge catalogues of music at a fraction of the price if it were to be bought physically.
These platforms also allow emerging artists to begin distributing their music much easier rather than having to rely on record companies to produce physical copies of the music and get them sold in stores.
Additionally, as consumers get more of their entertainment online from applications such as YouTube and TikTok, music used by advertisers and creators on those platforms generates further royalties for the rights holders.
Music royalties are a fairly stable cash flow. Whether in good or bad times, people still listen to music. As such exposure to music royalties would make a great diversifier to an investment portfolio.
What is the Hipgnosis Songs Fund?
Obviously, very few of us own record companies or are successful enough recording artists. Additionally, very few have pockets deep enough to go out and buy the rights to some of the most popular music. So how do we get access to music royalties? This is where funds like the Hipgnosis Songs Fund come in.
The Hipgnosis Songs Fund was the first investment company of its type to offer investors pure exposure to the rights of songs in the UK. The fund was listed on the London Stock Exchange in 2018 and since March 2020 has been a member of the FTSE 250 Index.
The fund owns the rights to 65,413 songs across all different ages and genres. 156 of these songs are Grammy award-winning. 78 of the 324 songs that have seen over a billion streams on Spotify and 52 of Rolling Stone’s 500 greatest songs of all time feature in the Hipgnosis Fund’s portfolio.

Hipgnosis Fund Catalogue Breakdown Source: Hipgnosis
The fund buys the composition rights to songs and receives the royalties as they are played, streamed etc. The investment team looks to buy catalogues across various genres to build a diversified portfolio so as to withstand changes in music tastes over time.
I won’t go through the catalogue in detail, but artists you may recognise are the Red Hot Chilli Peppers, Shakira, 50 Cent or even Barry Manilow.
The value of the fund has fallen significantly over the last few months despite showing strong performance up until then, with the fund now trading at GBP 0.87 a share which is down from a peak of close to GBP 1.30 a share. What has caused this fall? 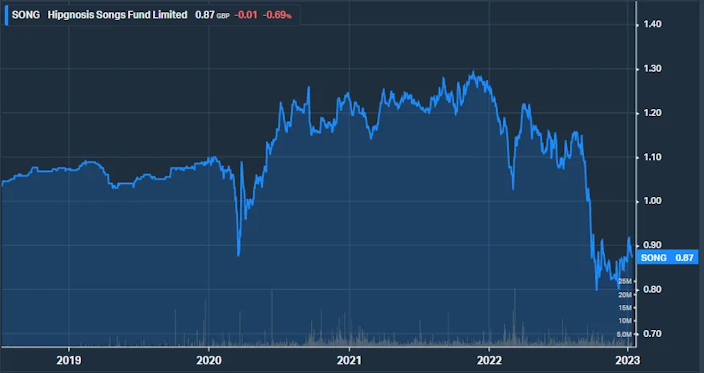 Hipgnosis Share Price Source: Koyfin
You Know Markets Don’t Lie, And I’m Starting to Feel it’s Right
On first viewing, you might think that this fall in value may be because of the fall in the value of the royalties that the Hipgnosis fund is receiving. This is not the case. The revenues remain solid and increasing and are expected to be stable despite the expected recession. Let’s take a look at the income statement. 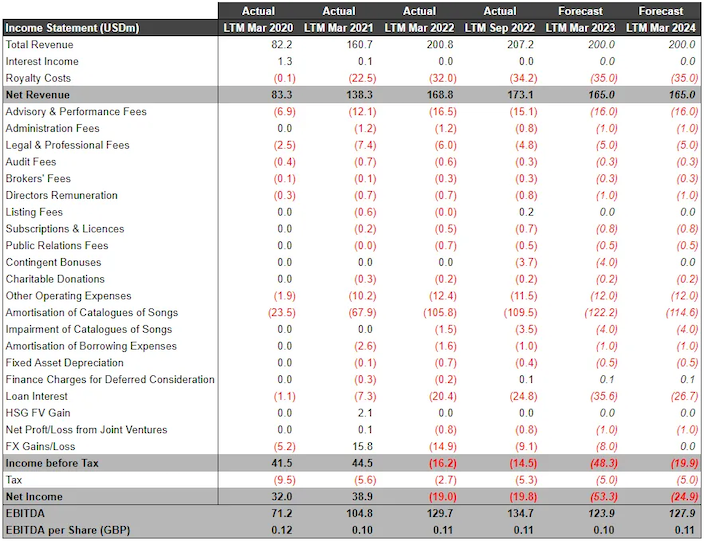 Hipgnosis Income Statement Source: Porchester & Hipgnosis
For the financial year ending March 2022 and for the twelve months to September 2022 (the two most recent results reported by the fund), the fund has seen a loss. This can be broadly attributed to two things:

The amortisation is the fall in the value of the catalogues of songs over time. Naturally, as the fund has grown in size this has increased since there is now a larger catalogue of songs.
The value of the songs is calculated by taking the expected cash flows over the next 20 years and discounting these cash flows. It makes sense that if you assume a 20-year life for your investments in this way, as you receive royalty payments then the holding value of the investments will fall as you receive the royalty payments.
This amortisation has grown in line with the portfolio and revenues and as such is not what has driven the fund to a loss.
The key is the loan interest.
The fund borrows via a revolving credit facility, borrowing cash to fund further song investments to enhance returns. The Hipgnosis fund pays interest on this borrowing, and importantly the rate at which the fund pays interest is floating i.e. it follows the latest interest rates.
Central Banks have been pushing up interest rates so as to combat rising inflation and as a result, the fund is having to pay increasingly more interest on its debt. This is beginning to impact profitability.
We can analyse to what extent these loan interest payments impact the value of the fund and its ability to pay dividends by looking at the cash flow statement and balance sheet. 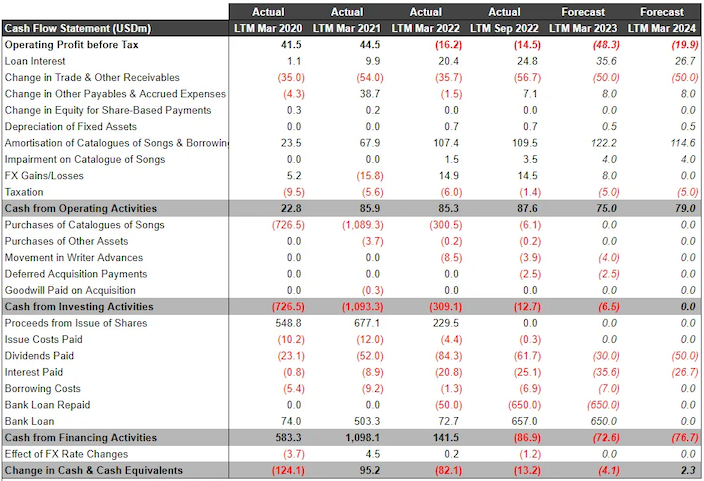 Hipgnosis Cash Flow Statement Source: Porchester & Hipgnosis
For my near-term forecast for the cash flows in the fund, I feed in our previous income statement assumptions. I also assume that there is no further catalogue expansion and as such no need for further debt or equity issuance. I then assume that roughly all the remaining cash flow is disbursed via dividends once we account for the interest payments. 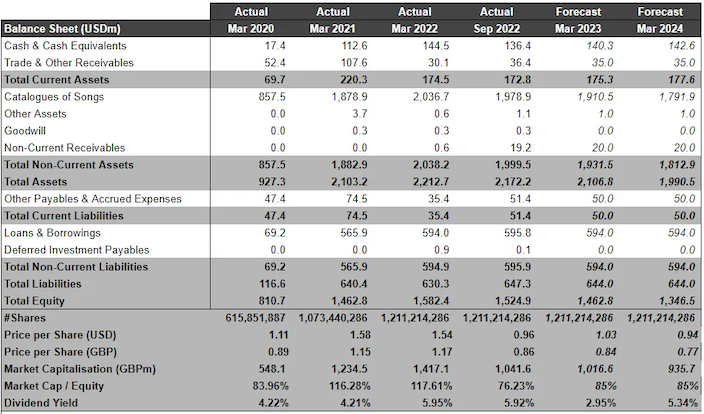 Hipgnosis Balance Sheet Source: Porchester & Hipgnosis
Interestingly, feeding this into the balance sheet and maintaining a similar discount that the current shares are trading at to the total equity value, the projected value pretty much matches the current share price spot on.
Importantly though, the current close to 6% dividend cannot be supported by the fund given the rising interest payments on the loan. I foresee the dividend yield falling close to 3% and then rising to 5% again in 2024 as interest rates fall. If interest rates stay high and do not fall like the market currently expects, then expect the value of the fund and its dividend to fall further.
So Be Wise, and Keep On, Reading the Signs of the Reporting
Adding song royalties to a portfolio seems like a great return diversifier. They are steady cash flows that should be robust even during a recession and will not correlate with a standard portfolio of stocks.
However, by buying shares in the Hipgnosis fund, you are in fact exposing yourself to interest rate fluctuations in a big way and not only gaining exposure to song royalties.
Situations like this are why it is important to always do your research and to take the time to understand what you are investing in. Understanding the more technical strategy and structure of funds and investment vehicles such as this is as important.
If you blindly went and bought shares in this fund without fully understanding what you were buying into, you could have been in for a nasty surprise.
No fighting.
Porchester

Joey Hirendernath@joeyhirendernathJanuary 16
Awesome post Porchester! A classic example of how things are often way more complicated than they first appear. Only through research and digging deep does one get access to a more nuanced picture.
Also cool to hear you were a DJ when you were a student!