Dollars and Sense@dollarsandsenseNovember 17
$23.6m follower assets
A Mess @ $KSS
I started following Kohls after they threatened to poison pill to stop a takeover attempt. It was an interesting moment somewhat overshadowed by Twitter threatening the same against Elon. This leads me to believe its managements responsibility to prove that was the right decision.
So, Kohls reported earnings today, how did they do? Spoiler: Not Great. 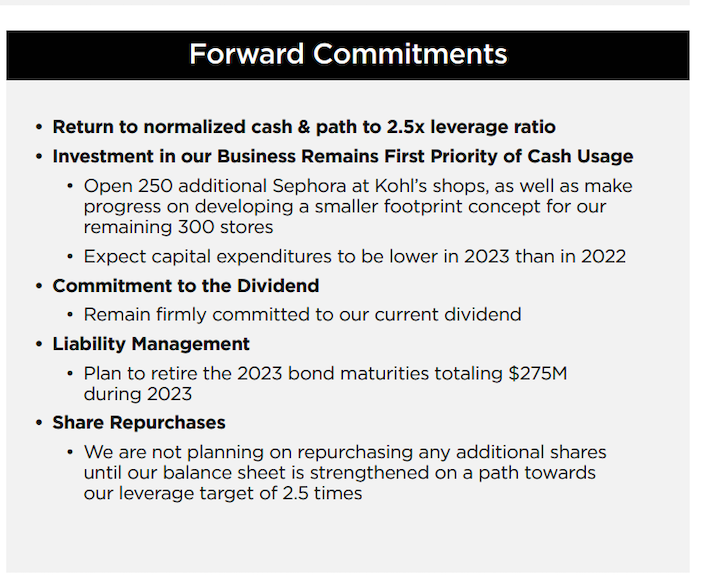 Management trying to save face with commitments of deleveraging and the suspension of their share buybacks. But interestingly...

Commitment to a dividend? But...

There is no Free Cash Flow??? They are just going to pile on more debt by keeping the dividend. Strange.

On top of this given "macroeconomic challenges" Kohls has pulled FY Guidance. Along with this it was announced a few days ago the CEO would be stepping down.
Overall very unfortunate quarter all things considered. The stock is up nevertheless as apparently all of this was expected. So I think I will continue to stay away until the company starts to show some improvement somewherre.

Porchester ✳️@porchesterNovember 17
Seems like they maybe regret not entertaining the takeover offer, and are now keeping the dividend high to keep shareholders happy... I'm sure given the macro picture, many shareholders would love to be bought out at a premium now!

Dollars and Sense@dollarsandsenseNovember 17
Author
@porchester yeah that was my thinking, maybe shouldnt have rejected a takeover immdiately

Dissecting the Markets@dissectmarketsNovember 17
As someone who once shopped at Kohl's since the pre-GFC times, back in the day, they'd have higher quality clothes at great prices. As time went on, the price remained similar but the quality just kept declining. The decline in quality compounded to a point where as Amazon and Lululemon rose, many of us shoppers stopped shopping at Kohl's. I went to Kohl's to see how they were doing in the post-pandemic world recently and honestly, I'm surprised that people still shop there and the quality of clothes is still terrible. Management ruined the brand by choosing to sell lower quality clothes in hopes that their margins would grow.

Joshua Simka@tomatoNovember 18
$KSS going the way of $BBBY, it sounds like. Maybe an activist can turn Kohl's around. Otherwise there won't be a strip mall in suburban USA with more than a Starbucks...