The Science of Hitting@tsoh_investingAugust 1
$34.9m follower assets
Meta: Peak Profitability?
This is an extended preview of today's write-up, exclusively for Commonstock readers. To read the remainder of the post, please subscribe to the TSOH Investment Research service.
https://thescienceofhitting.com/p/meta-peak-profitability
In Meta: “Appropriately Calibrated”, I wrote the following:
“The market (rightly) expressed concerns around FRL, most notably the scale of investment given management’s own admission that the segment was unlikely to be a material driver of the business at any point in the current decade. With the Q1 commentary, we now have a clearer understanding of how these investments are likely to evolve over the coming years (‘the goal is to continue growing operating profits and to fund FRL through that growth of the FoA business’). Management took Mr. Market’s skepticism as a valid reason to consider an alternative approach, primarily in terms of how they communicate their long-term vision with shareholders; in my opinion, it was a much needed change and an important step in the right direction.”
Just three months later, we’re seeing a significant disconnect between management’s long-term vision (funding FRL through FoA EBIT growth) and the economic realities of the business. In Q2, the company reported a sizable decline in FoA EBIT, along with significant growth in FRL operating losses. How will Meta management square the circle here? Answering this question will be a clear focal point for shareholders over the coming quarters.
Let’s start with the segment results, which highlights the severity of the problem. As shown below, FoA segment operating income was $11.2 billion in Q2 FY22, down ~25% YoY (with segment EBIT margins down 1,200 basis points YoY). In the FRL segment, the quarterly loss widened by ~$400 million YoY to ~$2.8 billion; in addition, as noted by CFO Dave Wehner on the call, this result was despite a nearly $500 million benefit from a reduction in the estimated losses on purchase commitments (related to the price increase on Quest 2 hardware). With FoA profits declining and FRL investments (losses) growing, the net result was a ~$4 billion decline in Meta’s YoY EBIT.

Clearly, this is a problematic combination; in addition, it’s unlikely to change in the short-term (if anything, it will get worse). My primary question, which I’ll address in this post, is this: in light of the difficulties at FoA, in addition to the large – and growing – sums allocated to FRL, will Meta exceed its FY21 diluted EPS (~$13.8 per share) at any point in the next few years? Said differently, will they actually be able to “continue growing operating profits”? 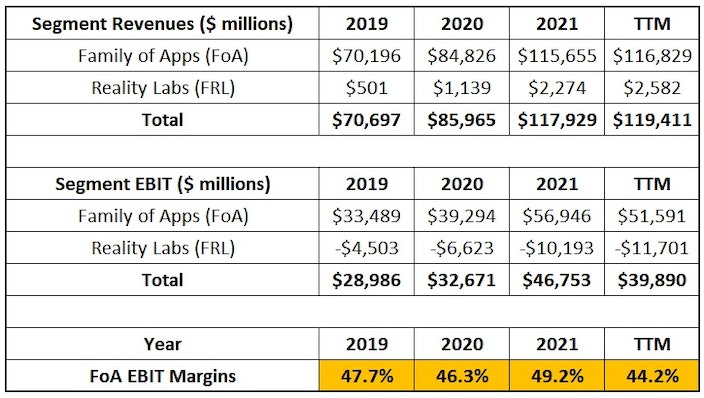 Family of Apps (FoA)
In Q2, Meta’s FoA revenues declined 1% to $28.4 billion (+3% in constant currencies). This result was primarily attributable to a 5% decline in average revenue per person across the family of apps, offset by a 4% YoY increase in daily active people across the apps (de-duplicated). While the realities of a user base that is approaching three billion people has taken its total on the percentage growth rates, notes that the number of people around the world who use at least one of Meta’s services on a daily basis has increased by roughly 400 million over the past two years. 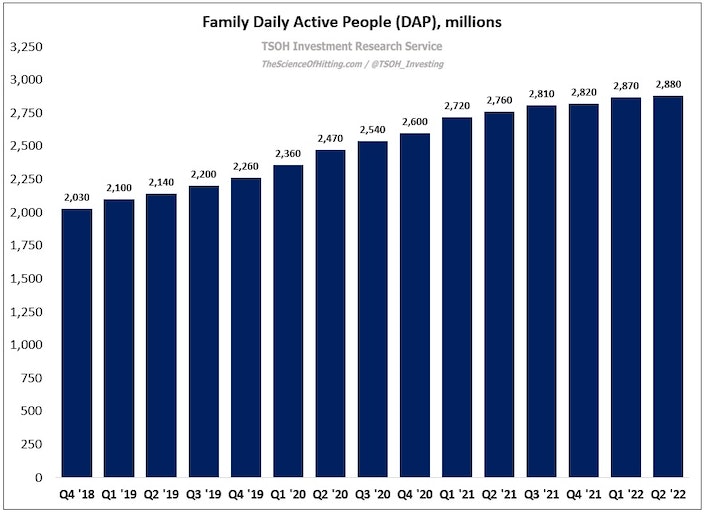 The decline in average revenue per person is reflective of a number of factors, including the impact of IDFA, engagement mix shift (less effective ad formats like Reels), geographic mix shift (outsized user growth in lower monetizing regions like Rest of World), and macroeconomic headwinds. (On Reels, this was a key comment from the call: “Reels is additive to time spent. Obviously, it does have a cannibalistic impact as well, but the net impact is positive… Overall, it is incrementally beneficial to time spent.”) Each of these factors will likely persist in Q3, with management guiding to a roughly 6% YoY revenue decline at the midpoint (and roughly flat in constant currencies). As noted on the call, “This outlook reflects a continuation of the weak advertising demand environment we experienced throughout the second quarter, which we believe is being driven by broader macroeconomic uncertainty.” 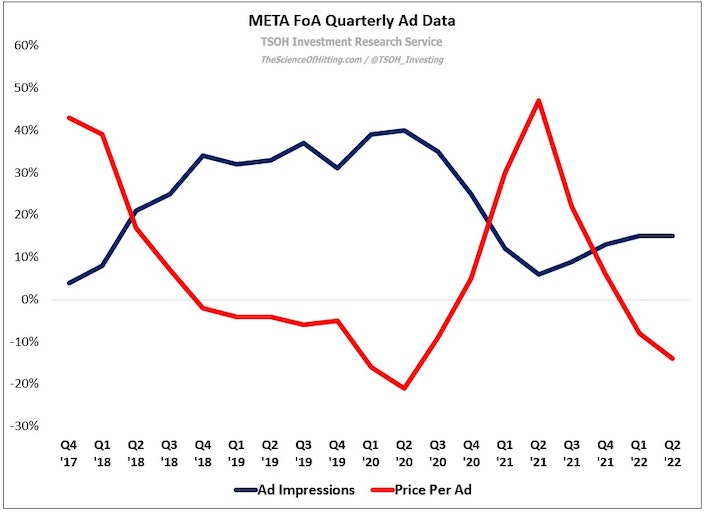 But again, to reiterate the point that I made about user growth, it’s important that we properly diagnosis the problem. As shown below, Meta is far from the only company with an ad-based business model that is experiencing a significant deceleration in its revenue growth rate. That doesn’t mean we can disregard IDFA or macroeconomic headwinds, but we should bucket them accordingly. (And for what it’s worth, my view is that both of these issues are addressable over the long run – “It's an AI problem. You have the resources… What IDFA will do is actually make the big guys who have deeper technology and deeper businesses already even stronger”).

Uday@upluskAugust 2
And its facing some issues in one of its largest growth markets as well:
https://www.reuters.com/technology/facebooks-growth-woes-india-too-much-nudity-not-enough-women-2022-07-21/

The Science of Hitting@tsoh_investingAugust 4
Author
@uplusk Thanks for sharing Uday, had not seen that one