Liquid@treadingstocksJune 18
Think For Yourself.
In my unlinked "Investor" account, $ZIM recently became my largest holding, overtaking a DCAing QQQM. Since 2021, I have enjoyed holding ZIM through the volatility (CC's & CSP's) and collecting the generous dividends ($22.35/sh to date; 45.8% yield).
Watching ZIM the past few weeks has been... less fun.
The past month, ZIM is down -20.9% ($SPY = -6.1%). Ouch.
I even thought about selling my remaining shares for a small loss.
...decided to go for a walk instead and think about things.
WHAT HAPPENED??
In the chart below, I have annotated major price action events with possible explanations. I believe a lot of the movement is related to the $17/sh dividend paid in April. It is important to note that I use the term "snatchers" in the most endearing way possible.
The other important timeframe noted on the chart is the historically busy shipping season (June - Oct) prior to the United States holidays. In 2021, a significant share price increase occurred during this time. I expect a similar response in 2022; perhaps more muted due to the reasons discussed below, but still upward. 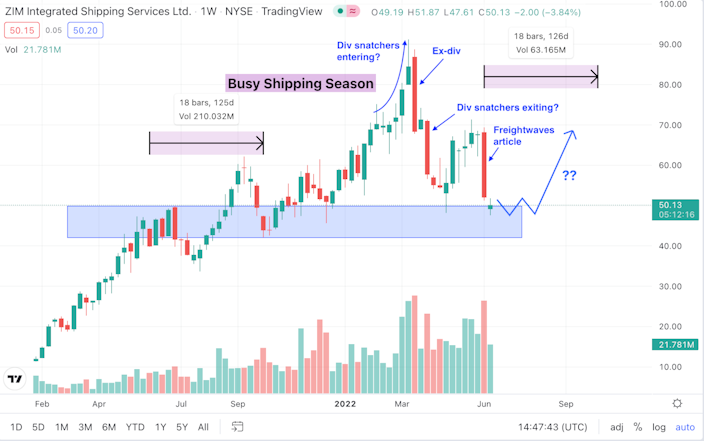 The event responsible for the most recent price drop is a Freightwaves article released on June 7th: "US import demand is dropping off a cliff".
The article, makes the following points:
On that 3rd point, I thought the data below was interesting as it shows Shanghai booking volumes (red) dip during the lockdown and a corresponding volume increase at Ningbo (yellow; closest alternative port to Shanghai). Instead of waiting in Shanghai and contributing to the "backlog", the shipments were simply re-routed through Ningbo thereby avoiding the surge of shipments upon Shanghai reopening.

From the same article, the data below shows both decreasing container volumes and spot prices for ocean freight (China to United States).

Before this last point, I need to emphasize again how amazing 2021 was for ZIM (below).
For me, the buried headline in this bearish article is that the "low" 2022 spot rates above are 73% or 59% HIGHER than 2021's rates (YoY; for West or East coast ports, respectively).
This all seems like an over-reaction to me.
Might be the 1st time the market has done that, right? 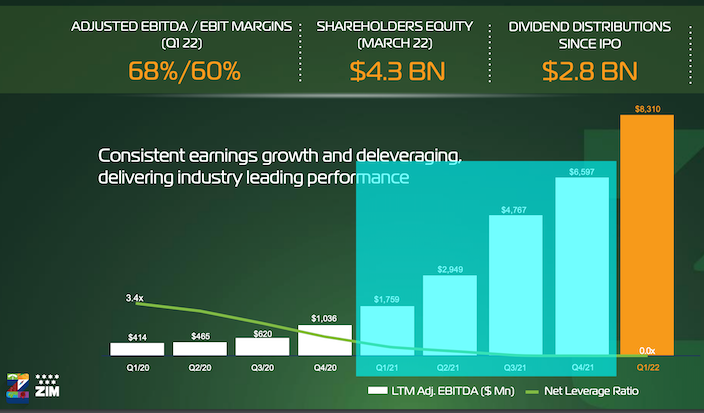 Glad I went for that walk.
Still holding ZIM.
Looking forward to the holiday season.

US import demand is dropping off a cliff
There’s no wave of containers coming to rescue U.S. freight markets. Booking data shows that U.S. imports are cratering.
FreightWaves

Hag@hagJune 18
I had a meeting last week with a senior team from a major Shipping and Logistics company and they are all but certain that shipping rates will never revert to pre-May ‘21 levels. As they put it, Shipping companies have ‘smelled blood in the water’ and they are positioning themselves for higher price bases for the future, consumers and suppliers alike will have to adjust to the new normal. Our cost of shipping from Saudi to the USA increased by 10% last month and since Q4 2019, the shipping price index we use for price escalation purposes has increased by 545%, the majority of those increases happened in the last 12-18 months.
​
With new shipping fuel rules (IMO 2020) yet to really come into play, this situation is going to continue; as more ships are retired or refitted shipping constraints will be an inevitability.

Irish Born Investor@irishJune 18
Regarding this. First to me the chart has made a lower high and I would be wary that lower prices could be incoming. The stock has badly broken through all moving averages on daily and weekly basis.
​
Fundamentally, and in your charts when you identify the earnings growth acceleration is this all not clearly a temporary over-earning due to conditions the past year or so and the exacerbation of that? This is a question as opposed to a statement. I find it hard to see how stocks like this are very correlated to supply chain issues etc and have made bubble like moves as a result? The stock was up 700% in about 18 months from open to high.
What would you say your time horizon on this is? If you don’t mind me asking.

Liquid@treadingstocksJune 18
Author
@irish I agree the chart is ugly, but FA > TA for me on this one.
The current conditions are temporary as you say (and I think Q1 2022 is the top), but a "burst" would mean supply chain issues are resolved overnight (your correlation question probably demands a separate post!).
On timeline, this sector is too volatile for it to be a true "set & forget" LT hold for me. Depending on earnings and price action, I'll be looking to scale out end of this year (holiday season) / early 2023.

sam stribling@stribJune 18
Long $ZIM with you! Great insights and article!

ThomasFJE@smhJune 18
Skipped over it when I first heard about ZIM. Dividend yield looked too crazy to me… shame I missed out on that one 🥲

sam stribling@stribJune 18
@smh I thought the same thing but bit the bullet anyway. It’s fundamentals are stellar so I took a chance. Only downside I’ve found (minor) is the Israeli govt withholds taxes on their dividends 20% for non-Israeli stock holders which is actually less than what they withhold from those who hold shares in Israel. That said, even with a chunk taken from the yield it is hard to beat!